A Theory About Doll Tearsheet 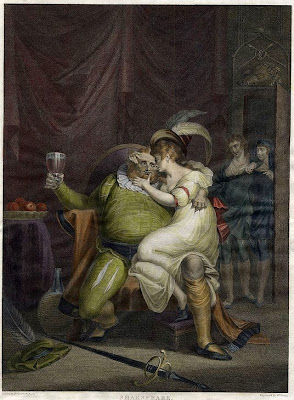 Fuseli's illustration of Falstaff and Doll Tearsheet, there: Henry IV Part 2, Act 2 scene 4. Doll, of course, is a prostitute at the Blue Boar. I have a theory about her name. Ah, but do we need a theory? It has been read as a straightforwardly descriptive moniker:


Her surname is suggestive of her activities ... Stanley Wells and Eric Partridge say she is "so called, either because she tore the bed-sheets in her amorous tossings or because her partners did so while consorting with her". According to René Weis, "Tearsheet' has been read as a misprint for 'Tearstreet' (i.e. street- walker) in the light of Hal's anticipating to meet 'some road' ( 2. 2.158), but a 'sheet-walker' or 'tearer' is equally plausible."

But wait a minute. In Medieval and Renaissance London, the only brothels legally permitted in the city of London were located on the appropriately named Cock Lane. Most of the stews were south of the river, beyond the city's jurisdiction, in Southwark (also, of course, where the theatres were) and elsewhere. The women working these places were overwhelmingly Dutch.


Flemish, Dutch and Low German women are particularly prominent in the records as prostitutes and bawds. Some did well as brothelkeepers … A Southwark stewhouse attacked by rebellious peasants and Londoners in 1381 was managed by Flemish women. An editor’s marginal heading in John Stow’s account of this event reads, “English people disdained to be bawds. Froes [women] of Flanders were women for that purpose”.’ [Ruth Mazo Karras, Common Women : Prostitution and Sexuality in Medieval England (Oxford University Press 1996), 56-57]

Prostitutes are not tolerated in London except in one street, Cock Lane. Hence Londoners and visitors resort to the stews at Southwark, south of the river. Here men may eat and drink, and have a hot scented bath and spend time in female company. In 1374 there are eighteen establishments, all run by Flemish women. Contrary to what you might expect, there it little or no stigma attached to those who frequent the stews; there are few sexually transmitted diseases and the marriage vows only require the fidelity of the female partner. [Ian Mortimer, The Time-Traveller's Guide to Medieval English (Vintage 2008), 21]

Here's an idea: might 'Tearsheet' be the anglicization of a Low Countries name like Tirschoot, or Dirshoet (or maybe even Droeshout) or something similar? Perhaps there was an actual prostitute Shakespeare knew called 'Doll Tirschoot' whom he slyly immortalised in the play? At any rate, 'Tearsheet' has, I think, a distinctly Dutch or German feel to it, as a name. Something similar could perhaps be argued for 'Quickly', too.

[PS. I know scholars often say the Blue Boar was in Cheapside, and not south of the river at all, since that was the location of the famous Elizabethan tavern. Again, we might prefer to think that Shakespeare has actually done his research: 'There was Boar's Head Inn, at Southwark, owned by Sir John Fastolf, who is the source for the character-name of Falstaff. While the Eastcheap Boar's Head Inn is not known to have existed during the reign of Henry IV, this inn may have done.']
Posted by Adam Roberts at 13:29