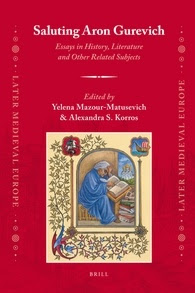 This is interesting: from a festschrift for Aron Gurevich:


Yelena Mazour-Matusevič: Why do you think modern Christians, unlike their predecessors, all seem to believe that they safely go to paradise after death? You hear over and over again in the United States this confidence “Grandpa went to God, or aunty is with the Lord now.” How do you explain this shift?

Aron Gurevich: Around twenty years ago there was a book published in the United States called Reflections on Life after Life by Raymond A Moody. In this book, an American physician describes the experience of his patients during clinical deaths. In all these descriptions of experiences the soul would leave the body, see the light at the end of the tunnel, through which they would see their deceased friends and relatives, and then come back to their bodies. I became interested in this book because, in the Middle Ages, a special genre existed called visiones that recount how people would die temporarily, and then come back to tell what they saw. Interestingly enough, while twentieth-century American souls all had exclusively positive vision of the afterlife, medieval souls reported quite the opposite: that the majority of people were in hell, and only a very small minority was saved. No medieval “witness” ever traveled to paradise. Isn’t it remarkable that none of the American witnesses reported any visions of hell? [Saluting Aron Gurevich: Essays in History, Literature and Other Related Subjects (ed. by Yelena Mazour-Matusevič, Alexandra Schecket Korros; Brill NV, Leiden: Netherlands 2010), 359-60]

There's something important here, I suspect. I've been poking around, looking at medieval visions of the afterlife for something I'm writing, and it is throwing up some excellent stuff. Reviewing Gurevich's 1988 Medieval Popular Culture in the LRB, Tom Shippey notes that the dedicated scholar really needs to read, in addition to the usual sources, 'saints’ lives, miracle collections, penitentials, and visions of the after-life like that communicated by the Essex peasant Thurkill to his parish priest'.


Extraordinary nonsense emerges from this: King Cormack MacCartey on his throne in heaven, but doing three hours a day in hell, the corpses of unbaptised infants being staked down to prevent them walking, knights with demonic servitors who work without pay just because they enjoy being near people, like the soulless longaevi of fairy-tale.

Nonsense seems a harsh judgement, howsoever modified by extraordinary. Some of this makes perfect sense to me.

Indeed, I wonder if there is quite such a disparity between medieval and modern visions of the afterlife as Gurevich suggests. Moody's work hardly involved a representative sample of the global population, after all; and there are surely plenty of visions of heavenly bliss in medieval literature (though not, I'm compelled to agree, in actual visiones of postmortem existence). If we want to argue for a medieval hell-bias, or a modern heaven-bias, then the common sense explanation would be that life in the middle ages was just much harder, less forgiving, nasty brutish and Peter-Dinklage-size. This is, more or less, the explanation Gurevich himself offers:


I think that this positive, exclusively pleasant and comforting vision of the afterlife is just part of a modern worldview preoccupied first of all with comfort in every aspect of life. Look, in modern American civilization all efforts are directed toward eliminating suffering, pain, crisis and loss. Everything is taken care of, everything is planned in advance and invested in: you have a bank account, a little house, a retirement plan, medical insurance, anesthesia etc. All is well except one little problem—death. So, they wonder how they have a free and guaranteed ticket to paradise as well. They cannot deal with discomfort or pain, so death becomes a kind of family reunion.

Then again, as-it-were 'literal' accounts of the afterlife are only ever going to be part of the picture. Magic, in the strong, medieval sense (in, that is, the religious sense: as referent to that part of human existence that cannot be rationally or materialistically explained away) has mostly been banished, in modern culture, to certain types of culture text: Fantasy, say. Which is to say: such texts operate as a kind of cultural subconscious articulating widespread human anxieties and aspirations for, amongst other things, survival after death. And as far as that goes, Tolkien's 'white shores, and beyond, a far green country under a swift sunrise' has largely been supplanted in the general imaginary by something more grimdark, GRRMish, and altogether medieval-hellish.
Posted by Adam Roberts at 08:10