'To Marguerite, From Vergil...' 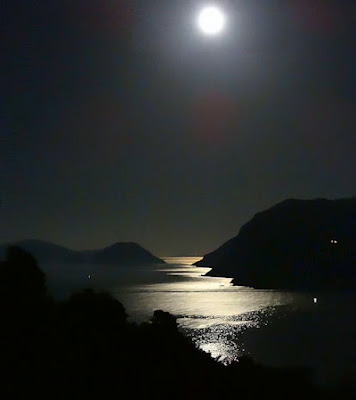 
Yes! in the sea of life enisled,
With echoing straits between us thrown,
Dotting the shoreless watery wild,
We mortal millions live alone.
The islands feel the enclasping flow,
And then their endless bounds they know.

But when the moon their hollows lights,
And they are swept by balms of spring,
And in their glens, on starry nights,
The nightingales divinely sing;
And lovely notes, from shore to shore,
Across the sounds and channels pour—

Oh! then a longing like despair
Is to their farthest caverns sent;
For surely once, they feel, we were
Parts of a single continent!
Now round us spreads the watery plain—
Oh might our marges meet again!

Who order'd, that their longing's fire
Should be, as soon as kindled, cool'd?
Who renders vain their deep desire?—
A God, a God their severance ruled!
And bade betwixt their shores to be
The unplumb'd, salt, estranging sea.

Now, the most obvious intertext (horrid word, but there you go) here is Keats, and in particular the 'Ode to a Nightingale' (1819). I'm not saying anything original when I note that. Critics have explored at length the Keatsian anxiety of influence not just in this poem, but throughout Arnold's verse. 'But when the moon their hollows lights,/And they are swept by balms of spring' says Arnold, full of yearning: 'and in their glens, on starry nights,/The nightingales divinely sing ...' Not only the specifics but the mood of the whole clearly owes much to Keats's masterpoem:


And haply the Queen-Moon is on her throne,
Cluster'd around by all her starry Fays;
But here there is no light,
Save what from heaven is with the breezes blown
Through verdurous glooms.

Tender is that night. We could say that the whole of Arnold's poem elaborates one of Keats's most famous, most-discussed phrases, when he describes himself attending to the song of the nightingale under the stars: 'Darkling I listen'.  Darkling. It's beautiful of course. But what does it mean?

I'm going to suggest putting these two poems alongside the opening of Aeneid 7. Aeneas has just returned from the underworld, having seen both the punished distorted into tortuous shapes by the consequences of their sinfulness, and the blissful existence of the blessed. Book Seven starts by addressing one more dead person: Aeneas's old nurse Caieta. He buries her on a piece of coastline that subsequently becomes the promontory and town of Caieta. Then he sails off:

So pious Aeneas, having performed those last rites,
and smoothed the mound over the grave, as a hush
lies over the high seas, unfurls his sails and leaves the harbour.
Breezes blow through the night, white light speeds them on
a gift of the Moon, the sea glitters with a tremulous radiance.
Soon they are skirting the shoreline of Circe's land,
where the rich daughter of the Sun makes
her untrodden groves echo with ceaseless song;
nightlong her shining palace is sweet with burning cedarwood,
as she drives her shuttle, weaving delicate textiles.
And from far away you can hear angry lions
chafing at their fetters and roaring in the deep night,
and bears and bristle-backed hogs in their pens,
raging, and huge-bodied wolves howling aloud;
these are men who, eating her magical herbs,
the deadly divine Circe had disfashioned into beasts.
To save the good Trojans from so hideous a change,
prevent them from stopping on those ominous shores,
Neptune fills their sails with favourable winds,
and hurries them, sweeping them past the seething shallows.

That's my line-by-line translation. Anyway: Arnold will certainly have known this passage (Aeneid 7 was often taught at school level). It's not likely, of course, that Keats read this Latin; but that doesn't mean he was unaware of the passage. These elements: the starry, white-moonlit night, the soft breeze, the islands in the flow, the sound of a beautiful song echoing across the straits, the animal life—these two latter becoming fused into one image that replaces the anger and frustration of the beast-people with a kind of yearning melancholy. It's all here. And if Keats wasn't reading Vergil in the original, he was surely aware of John Dryden's famous translation. Here's Dryden's version of this passage:


Now, when the prince her fun'ral rites had paid,
He plow'd the Tyrrhene seas with sails display'd.
From land a gentle breeze arose by night,
Serenely shone the stars, the moon was bright,
And the sea trembled with her silver light.
Now near the shelves of Circe's shores they run,
(Circe the rich, the daughter of the Sun,)
A dang'rous coast: the goddess wastes her days
In joyous songs; the rocks resound her lays:
In spinning, or the loom, she spends the night,
And cedar brands supply her father's light.
From hence were heard, rebellowing to the main,
The roars of lions that refuse the chain,
The grunts of bristled boars, and groans of bears,
And herds of howling wolves that stun the sailors' ears.
These from their caverns, at the close of night,
Fill the sad isle with horror and affright.
Darkling they mourn their fate, whom Circe's pow'r,
(That watch'd the moon and planetary hour,)
With words and wicked herbs from humankind
Had alter'd, and in brutal shapes confin'd.
Which monsters lest the Trojans' pious host
Should bear, or touch upon th' inchanted coast,
Propitious Neptune steer'd their course by night
With rising gales that sped their happy flight.
Supplied with these, they skim the sounding shore,
And hear the swelling surges vainly roar.

'Darkling they mourn'. Who are they? The animals whose voice so powerfully effects the human listener. Was this passage one of the things in Keats's mind when he wrote his own Ode? And is there at least a hint of Aeneas standing by 'the sounding shore,/Hear[ing] the swelling surges vainly roar' in Arnold's anguished question 'who bade betwixt their shores to be/The unplumb'd, salt, estranging sea'? If so, then we might start to think that the god whose bidding Arnold questions is Vergil's very own Neptune, the deity who has decided Arnoldian men ought not to tarry with sexually alluring women in foreign lands and so turn bestial in their lust. 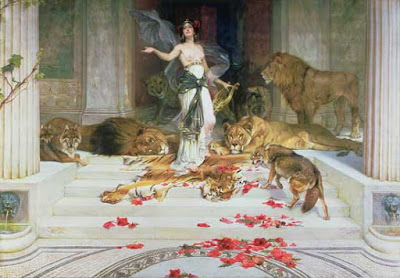