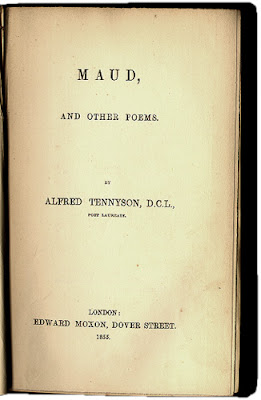 This is how Tennyson's beautifully strange 'monodrama' Maud (1855) opens:


I hate the dreadful hollow behind the little wood,
Its lips in the field above are dabbled with blood-red heath,
The red-ribb’d ledges drip with a silent horror of blood,
And Echo there, whatever is ask’d her, answers “Death.”

For there in the ghastly pit long since a body was found,
His who had given me life—O father! O God! was it well?—
Mangled, and flatten’d, and crush’d, and dinted into the ground:
There yet lies the rock that fell with him when he fell.

The unnamed narrator (nobody in this poem is named, with the sole exception of the woman with whom the narrator falls in love, the titular Maud)—the narrator has been rendered distraught to the point of near-insanity by the suicide of his father, who killed himself because ‘a vast speculation had fail’d’. A financial speculation, that is. The poem's speaker rails at the evils of 1850s Britain in a Thomas Carlyle manner, frets that he has inherited the black blood of his father (‘What! am I raging alone as my father raged in his mood?/Must I too creep to the hollow and dash myself down and die?’) and ponders ‘the singular beauty of Maud’, a girl he played with when they were both children and who now lives in the great hall. Maud's father has done well out of the financial speculations that ruined the narrator's father, and although the narrator resolves to withdraw himself from the world he ends up falling in love with the now seventeen-year-old beauty.

Maud is in three parts. In the lengthy Part 1, our narrator falls in love with Maud, and she with him. The course of true love unsmoothly-running, Maud's brother (the proxy for Maud's lupine father, who is off in London making more money) disapproves of the match. He thinks Maud should marry a local aristocrat, disdainfully called 'the babe-faced lord' by the poem's narrator. The brother's refusal of permission, and his generally haughty and dismissive manner, leads to him being called ‘the Sultan’ by the two young lovers. An elegant party is planned at the hall where Maud can dance with the babe-faced-lord, but the narrator is not worried: Maud has promised to sneak out at dawn and meet him for a love tryst, and Part 1 ends in the hall's flower garden as the narrator excitedly-anxiously awaits her coming:


Queen rose of the rosebud garden of girls,
Come hither, the dances are done,
In gloss of satin and glimmer of pearls,
Queen lily and rose in one;
Shine out, little head, sunning over with curls,
To the flowers, and be their sun.

That understated echo of the blood-coloured foliage at the poem's opening strikes an appropriately ominous note. In Part 2, the speaker is suddenly in France, where he has fled to escape prosecution. Backstory: Maud's brother and the babe-faced-lord surprised Maud with the narrator in the garden, and the brother rebuked and struck him. They immediately fought a duel (a detail which has always bothered me: shouldn't it take longer to arrange a duel?) in which the narrator killed the brother. In Brittany he learns that, Ophelia-like, Maud has herself died of grief, which news is too much for him. He loses his mind. Part 2 ends in an insane asylum, where he believes himself dead, but buried too shallowly:

The brief Part 3 ends the poem on a contentious note. The speaker has now, according to Tennyson, recovered his wits: ‘sane but shattered’.


Thro’ cells of madness, haunts of horror and fear,
That I come to be grateful at last for a little thing:
My mood is changed, for it fell at a time of year
When the face of night is fair on the dewy downs,
And the shining daffodil dies, and the Charioteer
And starry Gemini hang like glorious crowns
Over Orion’s grave low down in the west,
That like a silent lightning under the stars
She seem’d to divide in a dream from a band of the blest,
And spoke of a hope for the world in the coming wars— [Maud, 3:344-53]

The Crimean War, that is: to which the narrator goes in the hope of a glorious and redemptive death. Not sane behaviour in my book; others have disagreed.

There's a lot to say about all this, but I want to register one idea in particular, something which occurred to me for the first time this week. In a nutshell, it's this: was Dante in Tennyson's mind when he wrote Maud? He certainly read and loved Dante; his 'Ulysses' is based on Inferno 26, and The Vision of Sin (1842) ends with a sort of panegyric to Dante himself. But is Maud deliberately Dantean too?

Go back to Maud's opening stanza, quoted above. It kicks the poem off with a dark wood, beyond which is a ghastly pit, in which everything spoken returns as 'Death', and which drips with a silent horror of blood. Sound familiar? Maud's narrator finds himself in the middle of this selva oscura, contemplating the way nature violates itself ('the whole little wood where I sit is a world of plunder and prey' he says). In the Commedia, Dante finds his way out of the wood blocked by a savage wolf, and Virgil tells him he must find another way,

'This beast, that makes you cry out in fear, allows no-one to pass, and instead attacks and destroys them; and has a nature so malign and ruthless that no amount of feeding can glut its greedy will and rather, after eating, is even hungrier than before.' In Tennyson's poem, Maud's father is the 'gray old wolf and a lean' [Maud, 1:471]; and he, through his son, represents the implacable opposition to the narrator's love for Maud.

Since the narrator can't go on to a happy life with Maud he instead goes down, into the same pit that claimed his father, through cells of madness and haunts of horror and fear. Just like Dante. The key difference, of course, is that Dante is an external observer of the madness, horror and fear of others, where Maud's narrator not only re-presents but himself is the madness, horror and fear. But that's of a part with the project as Tennyson conceived it ('the peculiarity of this poem is that different phases of passion in one person take the place of different characters' is how he put it).

It would take quite a lot of labour to develop this notion, that Maud is a deliberate reworking of the Divina Commedia: more than I have time for at the moment. But the idea throws up some interesting implications. It would mean, for instance, that all the febrile love-lyric-ing of Part 1 is actually part of the narrator's Hell, which makes a kind of sense to me (Paolo and Francesca, and so on). It would mean that the up-reaching mountain of Purgatory becomes inverted into a shallow grave, and that Heaven means not just a restoration of sanity (the madness having been purged) but the narrator being elevated to the 'Heaven of Mars' (Paradiso cantos 14-16), where the souls of the warriors of God are picked out as rubies in the empyrion, and Mars is 'redder than usual, a bright and splendid ruby light': 'la stella, che mi parea più roggio che l’usato ... ché con tanto lucore e tanto robbi/m’apparvero splendor' [Paradiso 14:86-94]. By this point in the Paradiso Dante is being guided not by Vergil but Beatrice herself; just as Tennyson's narrator is being guided through the starfield by the spirit of Maud, who has 'divided from a band of the blest, ... and pointed to Mars,/As he glow’d like a ruddy shield on the Lion’s breast.' Here's Waterhouse's painting of Tennyson's Beatrice-y heroine: 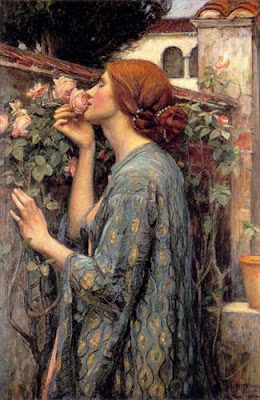 That lass's hair is più roggio che l’usato in representations of Maud, I think. It works, mind you.

In all this, Tennyson is, I think, as much working with Dante-filtered-by-English-Romanticism as he is going back to the echt Florentine. In this interesting essay on the influence of Dante on 19th- and 20th-century poetry, John Bayley thinks that


in our poetry, Shelley is the prime case. Keble observed that the intensity of the Paradiso is produced by a harmony of abstractions – light, motion and music – and Steve Ellis points out that this is precisely the Shelleyan formula in his long poems, notably in the last act of Prometheus Unbound.

It's also very precisely the formula Tennyson follows in Maud. We tend to think of Byron as a bigger influence on Tennyson than Shelley, I suppose; but of course Byron was also a deep-dyed Dantean:


Both in ‘Epipsychidion’ and in the unfinished Triumph of Life Shelley uses the elements of Dante’s poetry to create poetry of a wholly different kind. Shelley couldn’t abide anything in the nature of an orderly and regulated hierarchy, whether of crimes or virtues; his wife recorded, moreover, that he ‘shrunk instinctively from portraying human passion, with its mixture of good and evil, of disappointment and disquiet’. But no other English poet has made more inspired use of the music and the feel of Dante’s verse, transubstantiating its often homely precision and clarity into an equal precision of dream-like beauty and melancholy. Byron’s interest was much more local, centring on the incestuous figures and the guilty lovers. Guilt meant nothing to Shelley, but to the Scotch Calvinist latent in Byron it meant a great deal, and in his translation of the Paolo and Francesca episode, the part of the poem which especially engrossed him, as it was to engross in more sentimental fashion the later Victorian poets, he emphasises the curse upon the lovers and the way in which they are compelled to fulfil their ‘evil fortunes’.


The tragedy implicit in the Commedia is of course the political one, the betrayal of an imperial ideal, the greed and wickedness of those who in life have blindly betrayed it, or sought in vain to uphold it, and whom now in his great afterscheme Dante makes articulate and perceiving. For Browning, too, 13th-century Italy provided, as Ellis says, the suitable setting to study a soul whose divisions are a microcosm of a wider political polarisation and non-fulfilment.

This also explains, I would say, why Maud makes its connections between the doomed love of the narrator and Maud herself on the one hand, and the hellscape of Britain's broken socio-political world, where 'a Mammonite mother kills her babe for a burial fee,/And Timour-Mammon grins on a pile of children’s bones.'
Posted by Adam Roberts at 11:03