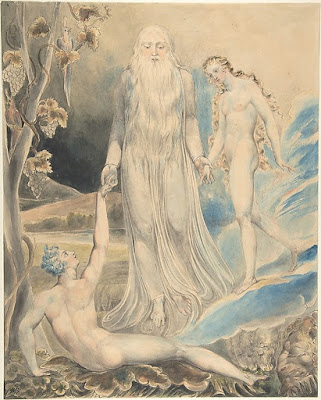 An engraving Blake made for his patron, the government clerk Thomas Butts. I took this from the NY Metropolitan Museum website (as per previous post), and you can download a huge, zoomable version of it if you go there, which is very cool. ʿInstead of showing the first woman emerging from Adam’s side,ʾ the museum notes explain, with a certain superfluousness, ʿBlake presents the couple meeting with ceremonial solemnity. A divine figure prepares to join their hands while a recumbent Adam looks up eagerly as his mate steps down from blue-tinged clouds.ʾ

It is lovely, and presumably a deliberate riff (as it were) on Michelangelo's creation of Adam, such that instead of Adam's hand lovingly-erotically connecting directly with Eve's, both lovers are mediated by the (is it just me, or) rather phallic-looking ʿAngel of the Divine Presenceʾ. This latter is not God, it seems; but a divine emanation of angelic presence. Adam's supineness, and the (rather oddly small-headed) Eve's lightness of foot as she steps down, are both beautifully expressive. The vines presumably signify fertility, and a lion lies down with a lamb peaceably in the bottom-right-hand corner. One little touch I especially like is the way Adam's hair mimics the texture and coloration of Eve's clouds, while Eve's hair mimics the texture of Adam's golden vine-leaves: a visual ʿrhyme' that links the two of them before they have even met. I don't know my birds well enough to be able to identify the breed of bird perched on the left. Would 'Bird of Paradise' be too obvious? 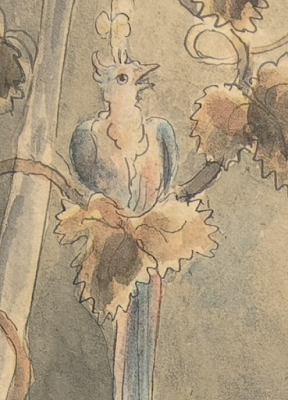 One last thing. I have a theory about this image, which it would be hard to prove, but which I'm going to air here anywhere. I think Blake has modeled it, formally, on the Hebrew letter שׂ, 'shin'. I'm not suggesting the underschooled, autodidact Blake was fluent in Hebrew or anything like that; but he certainly was interested in the Biblical languages, and one wouldn't need a detailed grasp of the alphabet or grammar to understand that this letter, 'sh' or 's', was of particular significance to Judaism. In Jewish worship it stands for the word Shaddai, a name for God; and the kohen, or priest, forms the letter shin with his hands as he recites the priestly blessing (unrelated interesting fact: young Leonard Nimoy, observing this in synagogue when he was growing up, later used a single-handed version of the gesture as Spock's Vulcan hand salute on Star Trek). Because it is so holy a letter, it is sometimes written with a special crown on the left hand upstroke. 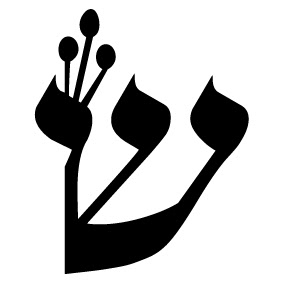 Am I alone in seeing a structural echo of this in Blake's composition? The crown becomes the foliate vine; the central upstroke the angel of the divine, the right-hand one Eve, Adam the bar across the bottom? It would be a way of Blake saying, in effect: all these elements together constitute one holy name, God. God pervades all this.
Posted by Adam Roberts at 10:36