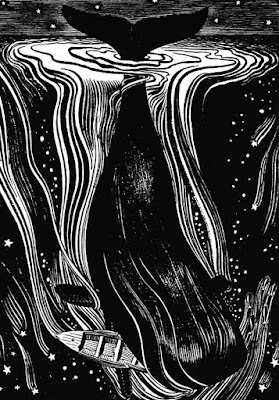 The latest meeting of Whalecolohics Anonymous
is underway. A semicircle of sea captains.

‘I sacrificed two marriages, all my wealth,’ says one
‘to the Whale. It rode me, ruined me. It has—’

The convenor's courteous: ‘thank you Jacob.
Ahab? Anything you'd like to tell the group?’

Ahab, arms braided more than crossed at his hefty chest
glares at the floor, neggs the group with his pegleg

scrapes it, squeeak-peg over the lino, bangs it down,
says: ‘do it matter? it do not. We're all dead.

Whale killed us, each and all. This endless meeting
that pitiless neon-light, these blind white walls

is hell, nor are we out of it. Drowned and damned,
condemned to conversation. The more talk

the less we have to do with aught that looks like life.
Anonymous because damnation's faceless.

I do not hate the Whale. I hate the drink that sunk me.
The Whale was when I was utmostest alive.

Keel-haul me, Ishmael, if ever I blaspheme
the awful mystery of the cetacean sublime!’

The convenor's courteous, but his court's infernal.
‘Come now, my friend: you'll never win your chip

for twelve aeons fishobriety like this.’
His voice hardens just a touch. ‘No one leaves

this room until old Ahab here repents.’
The others sigh, some groan, one swears at him:

‘don't be a dick about it, A-hole.’ Still: not
the smallest atom stirs or lives, even in Hell,

but has its cunning duplicate in mind.
His stubborness is white as Arctic cliffs.

The convenor tuts. ‘Let's go again,’ he says.
‘Captain Takeo: perhaps you'd start us off?’
Posted by Adam Roberts at 00:01