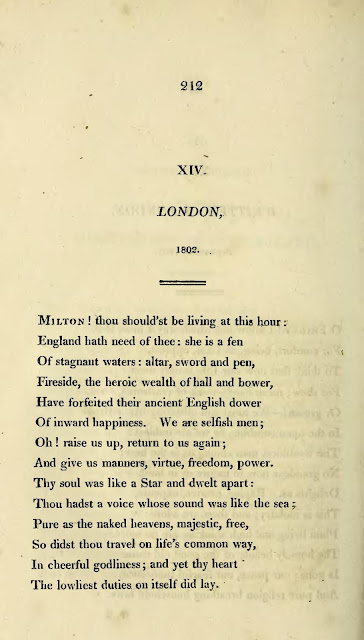 There's a specific piece of intertextuality in Wordsworth's famous sonnet that nobody ever talks about, even though lacking an understanding of it means that the poem doesn't make its fullest sense. That's quite a strange combination really especially when we add: it's an obvious point, really. The thing is: the poem's opening phrase addresses Milton in the same terms with which republican conspirators against Caesar in the first century BC addressed Brutus.

Marcus Junius Brutus, Caesar's friend and assassin, belonged to a family that traced a direct ancestral line to the legendary Lucius Junius Brutus who had, in 510 BC, expelled the last king of Rome, Tarquinius Superbus. A Republican hero, then; and one of the founding figures of the whole SPQR set-up. ‘Brutus was proud of his heritage,’ notes Thomas Jones: ‘he had his family tree painted in the atrium of his house, plotting his descent from Lucius Brutus on his father’s side, and, on his mother’s, from Servilius Ahala, who had killed the would-be tyrant Spurius Maelius in 439 BC. There are reasons to doubt this ancestry, which Brutus’ enemies weren’t slow to point out—Lucius Brutus was supposed to have killed both his sons for plotting to restore Tarquin, so wouldn’t have had any descendants—but, however remote the connection, it was meaningful to Brutus.’

As Julius Caesar consolidated his hold on power his opponents increasingly likened him to a king and urged action to curb his incipient tyranny. Marcus Brutus became caught-up in one such conspiracy. A statue in honour of Tarquinius Superbus's nemesis, Lucius Brutus, stood in the grounds of the temple of Concord. In February 44 BC someone wrote a graffito on the statue: utinam viveres; ‘thou shouldst be living [at this hour]’. Marcus Brutus took the hint. On the Ides of March 44 BC he stabbed Caesar to death in the capitol.

Utinam viveres became a pretty famous slogan, and quite a few later Latin writers and poets make reference to it: ‘0 libertatis, et impudicitiae ingens ultor Brute utinam viveres!’ wrote the 18th-century Italian Latin poet Enrico Barelli. A quick Google throws up plenty of variations on Dormis, Brute? Utinam viveres!, often in reaction to perceived political corruption or tyranny (‘Utinam viveres; degeres habes posteros’ lamented Heinrich Heisen in 1745). In other words, Wordsworth, in the first line of his sonnet, is Englishing a celebrated Roman republican anti-Caesarist sentiment. He is invoking Milton specifically as an English Brutus, to banish or perhaps even execute the tyrants ruining the country.
Posted by Adam Roberts at 09:31