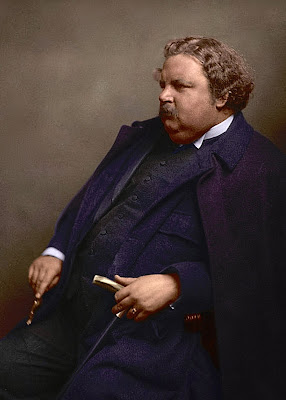 The danger with argument by paradox, proverb, apothegm and the like is that such rhetoric closes down, rather than opening up, further discussion. If you see the point being made and agree with it, you're likely to smile knowingly at the clever perversity with which it has been made and move on, your prejudices un-unsettled. And if you see the point and disagree with it, the form, deliberately lacking the lineaments of logical argument as it does, gives you little by way of purchase for articulating the specifics of your disagreement. Arguing with a witty Chestertonian apothegm is likely to seem like missing the point, like quarrelling with the premises of a joke.

But that's a shame. Witty or otherwise, these things are means of making a point, advancing an argument; and being witty isn't necessarily the same thing as being right. So for example:

OK, but this is an argument about nomenclature, rather than one about materialist-atheist belief. It was religious people who coined the term atheist, after all. This is as if we brought into general usage the term ‘ahippogriffists’ for people who don't believe that hippogriffs are real, and then twitted such people with the line: Ah, but without hippogriffs there would be no ahippogriffists! There's a sort of truth there, on the level of semantics: but it doesn't change the fact that there are no such things as hippogriffs.


Vers libre, or nine tenths of it, is not a new metre, any more than sleeping in a ditch is a new school of architecture. [Fancies versus Fads (1923)]

Because poetry is a house, and metre and rhyme are walls, windows and roof. Why is poetry a house? Why do rhyme and metre have these functions? Because I say so. Is poetry a house, though? Reading a bit of Tristan Corbière is like sleeping in a ditch because only those too poor to afford even the most basic of lodgings would do it, the experience lasts all night, chills you horribly and in the morning you emerge dirty and unrested. Not so funny now, is it!


The general notion that science establishes agnosticism is a sort of mystification produced by talking Latin and Greek instead of plain English. Science is the Latin for knowledge. Agnosticism is the Greek for ignorance. It is not self-evident that ignorance is the goal of knowledge. [The Thing (1930)]

I really think this is Chesterton failing in his own Chestertonianism. Ignorance as the true goal of knowledge is a perfectly serviceable paradoxical maxim, after all. What was it Einstein said? ‘Imagination is more important than knowledge. Knowledge is limited, where imagination encircles the world.’

I've honestly no idea in what sense he means ‘proved’, here, but presumably it is not in the sense that a mother whose child is born with a cleft palate had better take them to a doctor than pray for them to get better, and that there are ten thousand or similar physical circumstances.

And a coward may become brave with a stiff drink in him, as the British Army recognized when they carried the rum ration round the men who were about to go over the top on the Western Front. Your point?


It is terrible to contemplate how few politicians are hanged. [Cleveland Press, 1 March 1921]

I suppose this is aiming at jauntiness, but the whole ‘hate your elected officials’ line reeks of incipient fascism: it is, after all, what the fascist dictator cries as he rides in on his white horse. And when every politician not a lickspittle is hanging from a lamppost I'm not sure what good it does to say, but, but I was only joking! Talking of which:


Let a Jew be Lord Chief justice, if his exceptional veracity and reliability have clearly marked him out for that post. Let a Jew be Archbishop of Canterbury ... But let there be one single-clause bill; one simple and sweeping law about Jews, and no other: that every Jew must be dressed like an Arab. Let him sit on the Woolsack, but let him sit there dressed as an Arab. Let him preach in St. Paul's Cathedral, but let him preach there dressed as an Arab. ... If my image is quaint my intention is quite serious; and the point of it is not personal to any particular Jew. The point applies to any Jew, and to our own recovery of healthier relations with him. The point is that we should know where we are; and he would know where he is, which is in a foreign land. [The New Jerusalem, (1920)]

So a Jew can never be British. I see. I think the best retort here would be ‘fuck you, Gilbert’.
Posted by Adam Roberts at 04:57