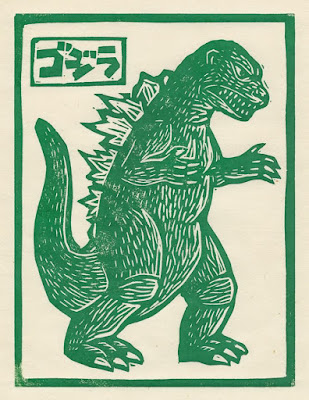 Book 1
Godzilla's wrath, to Earth the direful spring
Of woes unnumber'd, heavenly goddess, sing!
What grudge could light the fierce atomic breath
That burnt so many citizens to death?
What move four mighty limbs to crush and tear
Whole city blocks and scatter them to air?
Vast anger that found voice and fuelled the roar
Of this whale-monkey-kind-of-ichthyosaur
Declare, O Muse! what woke such monstrous foe
And summon'd him from ocean bed below;
What stirred him from millennial slumbers deep
To swap-out slaughter for abyssal sleep?
What made this slug-a-seabed rise as killer?
Gods of ill, why made ye him, gods, iller?

The seagirt freighter Eiko-maru, bound
For Odo Island, stagger'd and was drowned;
Another ship—the Bingo-maru—sent
To search and save, like suffer'd sea-descent.
In vain the fisherman his reel-line wets;
The catch absents itself from trawling nets.
Come journalists upon the anxious scene
And peer with fear upon the glassy green.
Godzilla's name is muttered on the street;
In bars and homes Godzilla folk repeat.
A ritual dance t'appease the monstrous foe
Is staged upon the strand—strange fandango.
Grim whispers pass from ear to ear: years past,
Young girls were sacrificed to beast's repast.
No sacrifice averts the creature now:
Monstrous it comes, and monstrous is its tāo.
As storm-winds wrap the islands, an attack
Wrecks homes, kills livestock: all is maniac:
And having sent nine people to their graves
The beast sinks back again below the waves.

What first provoked this horror to arise,
To leave its depths and batten on the skies?
Say, Muse, what wickedness might cause such grief?
And thus mutate the creatures of the reef?
Atomic testing is the culprit here:
Atomic bombs pollute the atmosphere
Still through the waters sink particulate
Atomic poisons to divert our fate.
Man's bombs explode, and loud their fiery roar
Re-echoes and re-echoes shore to shore.
Far in the deep recesses of the main,
Where aged Ocean holds his watery reign,
The god-kujira hears. The waves divide;
And like a hill it heaves above the tide;
Beholds humanity on naked lands,
And thus the anger of its soul expands:

“Unkind mankind,” the monster cries; “oh ye
“Un-sapient homos that abuse the sea,
“A cannon shell upon your bullet train
“I come, t'derail and hurl it in the main!
“To heap the shores with copious death, and bring
“Disaster dark from Tokio to Beijing.
“Let fall upon Japan's aye rising head
“The bloody-red dominion of the dead,
“Know now regret that e'er ye durst disgrace
“The boldest monster of the Ocean race.”

Thus raging still, and moving his huge weight
Came stern Godzilla stedfast in his hate;
Nor mix'd with mercy, nor in council join'd;
For wasting wrath lay heavy on his mind:
In his black thoughts revenge and slaughter roll,
And scenes of blood rise dreadful in his soul.
He wades the breakers, breaking ships apace
And seventeen are sunk without a trace.

From Tokio comes Kyohei Yamane
To plumb this monstrous puzzle of the sea.
Great footprints, trilobites of greater size
Astonish his trained scientific eyes,
And all his scurrying activity
Points to but one cause: radioactivity.
To Tokio he returns with warnings dire
Of monsters bred in Science's quagmire:
But tis too late! Godzilla's on the scene!
And looking lizard-tough and lizard-mean!
Full fifty metres tall, this vasty brute
Too huge to be a man-in-costume-suit:
Sublime in giant stature heel to nape
He stamps to shards the toylike urbanscape.

Man strives in vain to slay what God enlarges
Aye pooping out explosion-primed depth-charges.
Such ordnance monsters laugh to very scorn;
They cannot harm a beast of H-bombs born.
Mere gravel off his scaly skin they bounce
And panicked men Gojira mispronounce.
Yamane's daughter, Emiko, breaks off
Her old engagement to her former love,
Poor Serizawa, close but no cigar
Compared with her new love, young Ogata.

Japan's Protectors build a mighty fence
Of 30-metre heighth, and pass intense
Electric charge along its wires and bolts:
Full fifty thousand terrifying volts!
But to the beast this fence no stronger stood
Than gossamer or drifting cobwebs would.

“Japan, submit; nor dare my will withstand!
“But dread the power of this avenging hand:
“Th'united strength of all the Japanee
“In vain resists th'omnipotence of Me!"
The thunderer spoke, nor durst Japan reply;
A reverent horror silenced all the sky.
The city wrecked, with grief Emiko saw
Her motherland undone, the gods in awe;
The wretched quarrels of Old Nature's state
And politicians lost in blank debate:
Let senior soldiers senseless strife employ,
T'attack the Ocean's Unit, th'Absolute Boy
Their pilots have their orders and comply,
And jet planes break the silence of the sky:
Roused to rage, they loose their missile load,
Launch the red lightning at the Zilla's god.
But all in vain the high explosive burns
The monster's skin each empty shell returns.
The army's rifles blaze like stutt'ring torches
But blithe Godzilla's atom breath still scorches.
Attempts to kill the beast with tanks all tank;
Soon Tokio's o'erdrawn at its blood bank.
The Wakō Clocktower, the National Diet
And Kachidoki Bridge fall to his riot.
Large loss of life, a city's heart destroyed:
Tis more than could be fixed by celluloid.

Emiko tells Ogata, spills the beans:
Of Ser'zawa's research and what it means.
An Oxygen Destroyer is her news
That works to break the O2 atoms loose,
Slays ocean life from whale to small crustacean
Consigning them to rot's asphyxiation.
They ship the Doom Device into the bay
To Serizawa's earnest heart's dismay:
Lest others copy his most dread design
He vows to sink down with it in the brine
End his own life in detonating death
Deprive Godzilla, and himself, of breath.

Close to the point where tidal swell turns round,
The chugging frigate hurries cross the sound.
Now Zilla, rising from the seas profound,
The God whose earthquakes rock the solid ground,
His shouts incessant leave Japan aghast,
And fire feeds fire from belching atom-blast.
While thus the monster mocks a world destroyed
The Oxygen Destroyer is deployed.
Amidst the tumult of this martial run,
Die Serizawa and the beast as one.
The man is lost, the seas his corpse en-grave
The monster sinks in death beneath the wave.

Loud then the grief for noble Serizawa!
And tears of sadness griméd faces scour.
Full of the pain that urged their burning breast,
The Tokio-ians themselves express'd.
Heart-piercing anguish struck th' assembled host,
But touch'd the breast of bold Emiko most
And those who rule the inviolable floods,
Whom mortals name the dread Pacific gods
Those beings whom the ciné future know
Add toil to toil, pile woe on up-piled woe:
As swift as wind, o'er Honshu's smoky isle,
The radioactive beams the skies defile
Through air, unseen, involved in darkness, glide,
To ev'ry chromosome and slip inside.
Fair Nippon trembles underneath the load;
Hush'd are her mountains, and her forests nod.
There on a fir, whose spiry branches rise
To join its summit to the neighbouring skies;
Dark in embowering shade, conceal'd from sight,
Sat Commerce like unto a bird of night.
“Ye think,” quoth he, “Godzilla hath no equal?
“Prepare ye for Godzilla 2: the Sequel.”