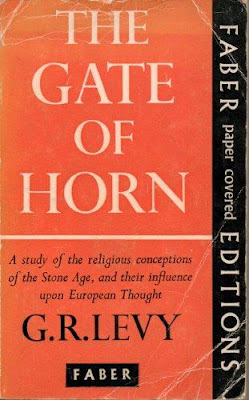 I've been reading Gertrude Levy's fascinating account of prehistorical religious and cultic practice, The Gate of Horn (1948). It's not what you'd call up-to-date (I'm reading the revised second edition from 1963, a lovely large-format Faber paperback, as you can see) and I'm sure it has been superseded in many ways by more recent scholars. But I'm finding it very stimulating, nonetheless. Quoth the American poet William Merwin:


There are aspects of her book which probably influenced my sense of what it means to be human; once read they were never quite forgotten. That is true, in some way, of the whole thrust of her story. It struck me somewhat as The Golden Bough had done but its argument seemed even more immediate and pertinent, closer to the coherence of a work of art. Levy was also a classicist, and part of her story is concerned with the development—as seen through burial practices, symbols, and maps of return—of the concept of the individual soul, the person or aspect of a person that might be reborn, that suffered and hoped and was remembered in myths.

As the book's Vergilian title suggests, Levy's real interest is in tracing what she considers the deep roots of European religious practice by sketching a possible set of ritualist genealogies from the stone age to the classical period and so into modernity (the work's subtitle is: ‘Religious Conceptions of the Stone Age and Their Influence Upon European Thought’). Lately I've been going through the Aeneid again, and trying to get some of my thoughts in order with respect to that great poem, and why I love it so much, so this is all mill-grist to me.

Still it seems to me some of Levy's most intriguing suggestions get mentioned only in passing, and could do with unpacking and exploring. Here, for instance, is one detail that really hits home for me. It comes out of her comparison between what is known of Stone Age ‘Aurignacian’ practices and the practices of what, clangingly, she calls ‘modern Primitives’ (she looks in particular at Australian Aboriginals and Tasmanians, Kalahari Bushmen, Eskimos and a few others).


The painters are said to have formed an initiated caste, distinct from that of the sculptors who made rock engravings of the south. They lived, it is stated, chiefly in small caves, while the sculptors used huts grouped round the greater caverns which were their permanent rallying-places. It has also been considered probable that the sculptors followed a more easterly route southwards, leaving traces of their work all the way. If so such migrations might reflect the cultural distinction between those Aurignacians of Central Europe and Russia who inhabited huts and made stone and ivory statuettes, and the cave-dwellers who inaugurated painting in the West. [Levy, Gate of Horn, 31]

So: caveats (for there are of course many). Maybe this is a local and eccentric distinction. Maybe myth and religion changed radically over the tens of thousands of years between the cave paintings and the modern age (the notion that uncovering the world of prehistoric humanity is thereby uncovering the deep, buried logic of modern humanity is a suspect one in many ways—though it's also a beguiling one, especially when we want to think about modern-day rituals or mysteries that no longer seem to make sense to us). The remnants of Stone Age art that have survived are unlikely to be representative of the entire culture. Because certain kinds of artefacts are more durable than others, or happen to be in places like deep caves far from erosion or previous discovery does not mean that Stone Age men and women necessarily spent a lot of time in deep caves, or devoted much time to the creation of such artefacts. Maybe these cave rituals, and the artefacts associated with them, were aberrations and most Stone Age religion involved perishable matter in open spaces. We don't, indeed can't, know.

I am, nonetheless, very struck by this apparent deep-rooted and fundamentally sacral distinction between makers of the 2D image and makers of the 3D fetish: between, that is, the painter and the sculptor. It strikes me as important and even profound that these were not considered separate but related ‘artist-priests’, but rather that they were completely distinct and immiscible castes doing radically different things. Maybe.

Add-in a third creative-cultic praxis which, we can be more or less certain figured largely in paleolithic religious life, even though it has left almost no archeological evidence: music, rhythm and dance. Perhaps the tribe's musicians and dancers group formed a third, distinct priesthood.

I find myself strangely fascinated by the idea that, at the root of all human culture and art, a fundamentally religious distinction was drawn between those who paint and those who sculpt, such that these two kinds of artists belonged to entirely different worlds, with different habitations and modes of living. Because it makes a kind of sense.

It makes sense to me personally, in part (another reason to be wary of all this, I know) because I see the writer's and the painter's creative praxis as being essentially linked, where I see the sculptor's (and by extension: the architect's, and the engineer's) creative praxis as being in some essential way different to the painter-writer's. This may be because, although I can write well, and can even draw (in my amateur way) to an OK standard, I cannot seem to sculpt, and have no engineering smarts whatsoever. I've tried sculpting a couple of times, with clay and with wood, without success. It doesn't feel intuitive to me, in the way that making lines and squiggles on a piece of paper, or a screen, does.

Let's assume that ideas from palaeolithic humankind do indeed remain operative today in howsoever subterranean or subconscious a sense.

I hypothesise, more or less wildly:

1. Painting is the ancestor of writing, a genealogy that runs via heiroglyphics to more abstract modes of inscribed symbolism: representing reality by making 2D versions of reality. Sculpture, which begins with the making of cultic or sacred fetish objects, is the initial iteration of all later human plastic arts: making statues and masks, building huts and palaces and temples, making machines, landscaping the world.

3. The third crucial manifestation of the palaeolithic religious impulse was ritual dance and performance accompanied by rhythm, music and song. From this developed both the theatre (a religious ritual in ancient Greece that became a widespread secular artform, without ever quite leaving behind its sacred elements:—sporting events, cinema, TV all have their fans, a word etymologically linked to fane, temple) and the traditions of public religious worship, for instance as practised in Christian churches and Muslim mosques weekly worldwide to this day. Kids at a pop concert, supporters at a political rally, sports-fans in a stadium watching their team play, are all manifestations of a fundamentally religious collectivity, more formally actualised when congregants gather in church, synagogue or mosque. This public and collective mode of being-in-the-faith is spatial and organisational, and so fundamentally theatrical-sculptural.

4. Dancing is a kind of sculpture, and religion develops as a branch of the sculptural, not the painterly, sacred tradition (hence its tendency to erect bigger and more elaborate architectural spaces to situate worship). There are several important religious traditions that ban the painterly (the making of graven images) from worship altogether. There are none that ban the sculptural-architectural. [*There's an obvious issue here, since of the many faiths humans have professed over the last many tens-of-thousands of years the two that eventually swept the world were both religions of the book: and so of words, and writing. But in both cases these faiths' relationship to the heritage of painting is complex and contradictory: Christian Puritanism, a phenomenon with several heads, and Islam both ban paintings from their places of worship; personal witness trumps written texts in both traditions; Catholics speak and hear, but do not write-and-read, Confession ... and so on.]

5. The world in which palaeolithic humanity lived was a sculptural world: filled with actual, graspable objects. Such was the fundamental reality of life and therefore the logic of whatever transcendent Power(s) was behind life. But there was also an element in paleolithic life that was not actual and graspable: the dead and their chthonic power. The sacred sculptors of the tribe made fetish objects like the Willendorf Venus to preside over the bringing-into-being of new life. The sacred painters made shadow-images, not real, not graspable, of things of the world to record, and perhaps to fix, the unseen, the chthonic and the dead. It was proper that they did this latter under the ground.

6. Painted images of animals are post-facto records of successful hunts, made to appease the spirits of the slaughtered animals, and their deity, to ensure that such animals would not withdraw themselves in pique and that therefore hunting could continue. When humans died their remains were buried in the earth; this could not happen with hunted animals, because their remains were eaten and made use of, hence the need to make painterly representations of those creatures. [‘men are represented very sparsely and very timidly’ in cave art, Levy notes: ‘in striking contrast to the bold certainty of animal designs’.]

7. Caves and their sacred arts (that is, painting and, later, writing) were associated with death and the dead; sculpture, architecture and engineering with life and the living. This is a crucial point of difference in understanding the way these two vectors of art signify in the modern age.

10. Psychoanalysis is a fundamentally painterly/writerly innovation, the iteration of consciousness as an inner cave. It was and remains a chthonic, morbid and introverted art. (I don't say so to dismiss it. On the contrary: Freud and the post-Freudians seem to me to constitute a profoundly insightful and powerful tradition. But then I am a more-or-less morbid, chthonic, introverted writer-type myself).

11. There is less difference between hunters and farmers than perhaps I have previously believed. Hunting is essentially a sacred dance and farming is fundamentally sculptural, but both are above-ground manipulations of space that guarantee the life and continuance—that is, the future—of the tribe.