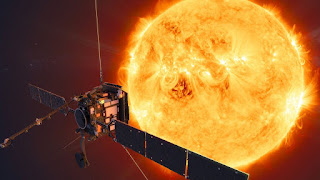 Historians and analysts are still arguing how it is that we of the Earth were able to overwhelm the vastly more numerous and powerful inhabitants of the Sun. There are, of course, many factors that enabled our victory. As a species we worked hard to overcome our manifest disadvantages, our relative puniness and underpopulation not least. The dwellers on the surface of the sun thrive in temperatures from below water’s freezing point up to many millions of degrees C, where each of us Earthlings must maintain out body's core within a tiny temperature spectrum or perish. The least Heliist citizen is huge, powerful and intelligent. The best of us is a pygmy by comparison. The Heliists comprise trillions of individuals, any single individual of which, were s]he to land on Earth, could easily defeat, single-handed, an entire army of homo sapiens in open battle.

How did we win? I intervene into this learned and, alas, furious debate to note only one thing, for it has I think been overlooked by our analysts and historians. Although the empires and queendoms of the Sun are manifold, perhaps as many as forty thousand separate realms, and their interrelation is complex and often belligerent, in this one particular thing, we had the advantage of disadvantage. Of, that is, one disadvantage in particular: we long ago chose the Copernican model of the solar system over the Ptolemaic.

So powerful and compelling is the latter model, so deeply in tune with our ego-senses of our importance, that only very grievous discrepancies between the theory and the observed motions of planets in the sky—retrograde curls in orbits, the impossibility of determining the radii of planetary orbits by Ptolemy’s geometrical methods—forced us to abandon it. Such abandonment was painful and protracted and it entailed a whole conceptual revolution that, amongst other things, weakened the unitary hold of Catholic Christianity on Europe and set in motion the Scientific and Industrial revolutions.

But for those gigantic beings of light and plasma who roam the surface of the sun no such Copernican Revolution occurred. Because there was no need for it. Their egos and their celestial observations precisely allied. And so we, though weak and susceptible, were forced into a more realistic understanding of our place in the cosmos. And so we developed all manner of technological prostheses and fixes and augmentations. The Heliists never did this.

It was this mind-set, plus (as we are often reminded) the loss of millions of human lives, that led to our victory in the recent war. It was this that lost it for the Sun. My friends, when you next celebrate our great and unlikely victory, sacrifice a rooster to Copernicus.
Posted by Adam Roberts at 00:01