Some responses to "Eric, or Little by Little" 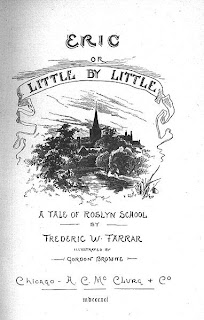 The coming academic year sees me teaching (amongst other things) a course on Childrens’ Literature. I am starting the process of getting my bits and pieces together with regard to that, and generally girding my loins. Loin-girding. Fitting girders to those loins, good and proper.

Now: one of the set texts I'm assigning them (I rub my hands in secret glee) is Farrar’s Eric, or Little by Little (1858). It’s on the syllabus because a major strand of the 20-week course is school literature, up to and including Harry Potter. And Eric was staggeringly influential and popular in its day; it’s one reason the name ‘Eric’ came into 20th-century vogue. But it is, let’s make no bony bones about it, very bad indeed. Here’s Jeffrey Richards, in Happiest Days: The Public Schools in English Fiction (Manchester University Press 1988), summarising reactions:


Few best-sellers can have been so reviled and excoriated over the years as Dean Farrar’s Eric, or Little by Little. It has consistently earned such critical judgments as ‘mawkishly false’ (Vivian Ogilve), ‘a preposterous book’ (John Rowe Townshend), ‘the sort of story Dr Arnold would have written if he’d taken to drink’ (Hugh Kingsmill), ‘terrible warnings, soaked in nauseously cloying piety’ (Roger Lancelyn Green), ‘the only book I ever wanted to lose’ (Eric Ambler), ‘the nightmare emanation of some morbid, introverted brain’ (Edward C. Mack), ‘one of the most idiotic books of the nineteenth-century’ (Benny Green). The undoubted immortality of Eric is, then, as one historian has put it, ‘an immorality of derision.’ [70]

That’s posterity. What about the book’s contemporaries?


The criticism began as soon as the book was published. Writing in Blackwood’s Magazine in 1861, W Lucas Collins said of the book, ‘A more utter failure can hardly be conceived. Seldom has a book been written with such an excellent intention, by a scholar and a gentleman, which is so painful to read.’ He admitted its popularity, which he attributed to the general interest in school stories, the authority of the author as a Harrow master, and the sensationalism and ‘painful and repulsive details of the story’, which ‘confirmed all that anxious mothers had always feared and half-believed of the enormities of large schools.’ But he deprecated the sensationalism (‘granting the facts, we can see no sufficient motive for dragging such a miserable history into the daylight’) and the excessive emotionalism. … The Saturday Review complained ‘we can scarcely imagine a less healthy book to put into a boy's hand’, pointing to the dangers of inculcating priggishness, self-importance and a morbid self-consciousness. It also poured scorn on the excess emotionalism:


Its general tone is uniformly sad and this sadness is heightened artificially. To say nothing of three more or less violent deaths, two of which involve angelic deathbeds, everything is served up with tear sauce. The boys quote hymns, and to the infinite indignation of all English readers, occasionally kiss each other.

Experts on children’s literature were soon expressing doubts similar to those of the critics. In 1869 Charlotte Yonge described Eric as that morbid dismal tale, which we hope no mother or boy ever reads, since it can answer no purpose but to make them unhappy and suspicious, besides that it enforces by numerous telling examples that the sure reward for virtue is a fatal accident. [70-72]

There's something glorious about that Saturday Review piece. As to why such tosh became so widely read and influential: well that’s a large question, and for another day.
Posted by Adam Roberts at 13:49