Here's an old chestnut of 19th-century scholarship. It's an unidentified allusion in Arnold's 'Dover Beach' (probably written 1851), one of the most famous short poems of the 19th-century:

The sea is calm tonight.
The tide is full, the moon lies fair
Upon the straits; on the French coast the light
Gleams and is gone; the cliffs of England stand,
Glimmering and vast, out in the tranquil bay.
Come to the window, sweet is the night-air!
Only, from the long line of spray
Where the sea meets the moon-blanched land,
Listen! you hear the grating roar
Of pebbles which the waves draw back, and fling,
At their return, up the high strand,
Begin, and cease, and then again begin,
With tremulous cadence slow, and bring
The eternal note of sadness in.

Sophocles long ago
Heard it on the Ægean, and it brought
Into his mind the turbid ebb and flow
Of human misery; we
Find also in the sound a thought,
Hearing it by this distant northern sea.

Ah, love, let us be true
To one another! for the world, which seems
To lie before us like a land of dreams,
So various, so beautiful, so new,
Hath really neither joy, nor love, nor light,
Nor certitude, nor peace, nor help for pain;
And we are here as on a darkling plain
Swept with confused alarms of struggle and flight,
Where ignorant armies clash by night.

So 'Sophocles long ago ...' Where in Sophocles? Nowhere, according to scholarship: 'Sophocles was Arnold's favorite Greek dramatist, but no passage in the plays is strictly applicable. See Baum 88: "the alleged parallels simply do not meet the case; they are irrelevant".' [Kenneth Allott, The Poems of Matthew Arnold (Longman 1965), 255]. But that edition is as old as I am: surely somebody has something more, now? Apparently not. ('The passage most often adduced,' said Richard Cronin in 2012, 'is from the third chorus in the Antigone.' But that hardly fits. Check for yourself.)

Well, I have a suggestion. I recently chanced upon William Crowe's Lewesdon Hill (1788) and noticed that it, from the first edition through to later ones, carried the following epigraph on the title page: 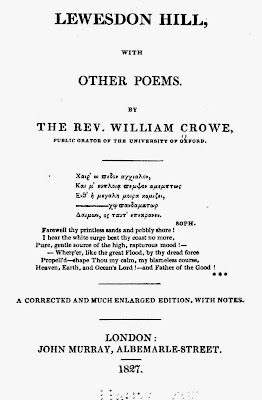 Click to embiggen. That must be the passage Arnold has in mind, yes? I think it fits. Here's the Greek as Crowe quotes it:

The Greek is Englished, presumably by Crowe himself, as:


Farewell thy printless sands and pebbly shore!
I hear the white surge beat thy coast no more,
Pure, gentle source of the high, rapturous mood!
Where'er, like the great Flood, by thy dread force
Propelled—shape Thou my calm, my blameless course,
Heaven, Earth and Ocean's Lord!—and Father of the Good!


So, it turns out that this is a slightly mangled version of Philoctetes' last speech in Sophocles' play of that name:


Farewell, Lemnos, bound by waves [Crowe changes this to 'Farewell shores of Lemnos'], give me no further cause to mourn, but send me off on fair seas to win my glory where fate now carries me, to the judgment of friends [Crowe omits these last five words] and the all-governing spirit that rules these events.

Part of the issue here is that Crowe reads 'αγχιαλος' ('maritime, of the sea shore') for 'ἀμφίαλος' ('place where two seas meet, headland'). He also reads 'χψῶανδαματωρ', which isn't a word in any Greek Lexicon, but which we can take as a typo for [χὠ] πανδαμάτωρ, 'all-governing'.