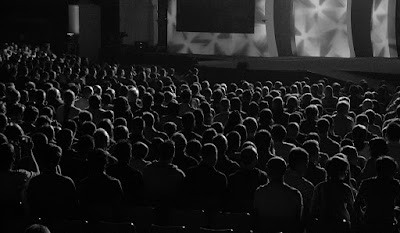 My experience of teaching cinema is not extensive. Usually I deal with books, although I did include some movies on a course about science fiction I used to teach, and there are a couple of films on the children's literature unit I have taught and continue to teach. Supported as it is on this slender experiential reed, I shall hazard an observation. Students are less tolerant of the earlier forms of cinema than they are of the earlier forms of poetry and drama. What I mean is that they will, more or less gladly, read, let's say, Jacobean tragedies and eighteenth-century poetry and so on, if their professors tell them to do so. They tend to be more resistant when it comes to the eighteenth- and early-nineteenth-century novel (getting students to engage with Pamela or Waverley is an uphill struggle). But cinema is in a different category. They are openly disdainful of being made to watch a film like Metropolis: 'boring', 'so slow', irmagahd' and so on. There may be a simple explanation for this: students approach Chaucer as an object of study, expecting to be educated and perhaps interested, but not expecting to be entertained as such. But novels to some extent and films/TV to a great extent are what they go to 'in the real world', outside of studies, when they are looking for entertainment. That such texts may not be entertaining after the manner to which they have become accustomed strikes them, on some level, as an affront. 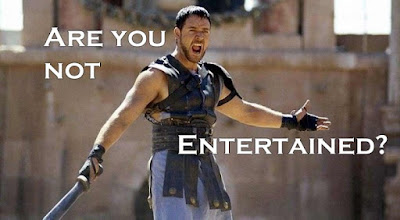 The crucial thing is that at the heart of the word entertainment, etymologically, is the Latin teneo, I hold. Entertainment is what holds us (strictly what holds us inside, as per the word's prefix): what keeps us in our seat, which compels us to keep turning the pages and so on. Entertainment is mode of capture. But if that's true, it can only mean that boredom is a mode of release. The thing about watching Metropolis, if your idea of cinematic entertainment is predicated upon the biggest movies of the 21st-century, is how unlike such movies Fritz Lang's flick is: how slow and stagey, how arthritic and often incomprehensible in action. how dull, instead of being nimble and fizzy and instantly graspable like the sorts of films you usually enjoy watching. If these latter things are your fix, then of course being released from them feels uncomfortable. You are the man, or the woman, with the golden arm. Not to worry: I am too.

Of course it won't do simply to flip these categories about: to say 'actually I find Pamela very entertaining, whereas nothing could be more boring than these endless sequences of explosions and spandex-clad superheroes walloping one another ...' It's not that there is anything wrong with being entertained by Samuel Richardson and bored by the Age of Ultron, any more than there's anything wrong with being bored by the former and entertained by the latter. Each to his, or her, own. The problem isn't one's preference; its the sense that a superior taste is grounded in the less repetitive work. Not so. I'd be hard put to name a more repetitive novel than Pamela, though if pressed I'd hum and haw and eventually name Clarissa. These texts are not just the-same-things-happening repetitive; they are the characters-staying-the-same repetitive, they are living in a cosmos defined by sameness. One of the marks of classic literature is that it is not disposable, which is a way of saying 'I can read this novel over and over again for profit and pleasure', which is the very apotheosis of repetition. We tend not to think that reading Middlemarch forty times is an enactment of monotony, of course. On the contrary, we insist that we find new things every times. That's the whole point. Each re-reading binds us more closely. We are held-in by the thing that delights us. Maybe the Jam's jauntily carceral 'That's Entertainment' was always a more straightfoward statement of the name of the game, and less a matter of ironic juxtaposition, than I used to think. 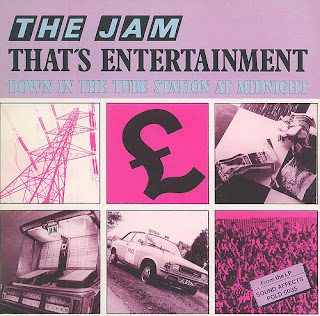 We don't really talk about it, though; at least not in these terms. It's one necessary feature of captivity that we don't interrogate it, it interrogates us. We don't 'read' contemporary entertainment; it reads us. That's one advantage of the Boring, another thing it frees us from. The Boring allows us to read it.

It could be that what 'we' are looking for is emotions: and not just any emotions but the culturally specific emotions that both give us pleasure and inoculate us against despair. In today's entertainment-world I'd thumbnail those emotions as primarily: exhilaration, familiarity and a kind of communal validation. The emotions provoked by Clarissa, or Metropolis, though palpable, don't align themselves with our present-day affective tastes, I suppose; don't map onto those three qualities. The appetite for exhilaration is partly about kinetic action and motion and speed, and partly something closer to the sublime, an awe associated with scale and scope. Modern cinema is expert at addressing both: velocity in the rapidity of contemporary action montages, and the skill with which such scenes are choreographed, actors, props and sets; awe in the miraculous world of special effects.

I'm assuming that there a special kind of eloquence in the machine-made, repetitive, clichéform shapes that cinema serves its audience. Which is to say, I'm not proposing a neo-Frankfurtian attack on the culture industry.There was a time when Adorno and Horkheimer seemed to me to be on to something. Nowadays I'm not so sure. Their malign Culture Industry was, is, supposed to be based on an ethic of distraction, and what the people are being distracted from—the immanent and structural oppressions of capitalism, their own deracinated and repetitive lives—is the important thing. But it doesn't seem to me that contemporary entertainment is very distractive, actually. I think it cultivates attachment rather than distraction; although in many cases an ironic attachment that is aware of the shortcomings and naffness even as it celebrates the vitality and possibility of shared cultural discourse (memes! jokes! cosplay!), or vice versa elevates the individual's idiosyncratic taste ('hey, I actually like the Star Wars prequel trilogy!') as a bulwark against the conformist tide of, well, shared cultural discourse (memes! jokes! cosplay!). Modern entertainment is affiliative; it requires us to opt-in.

If there's something else, some glue holding the whole thing together, and holding (tenet, it holds) us in it (enter, inside), then I wonder whether it might be a sense of shared trauma, for which the neurotic repetition and re-repetition, the rocking back and forth and obsessive making and remaking of favourite franchise titles, stands as symptom. We have to watch London, Paris, New York, unreal city, your capital city, my capital city, smashed to smithereens over and over again: from Independence Day to Star Trek: Into Darkness, from the Avengers to that dour Superman: Man of Steel reboot; from Terminator 2: Judgment Day back to Doctor Strangelove and forward to the string of Star-Warsian death stars blasting entire planets, to ... look, I could go on and on. And actually that on-and-on-ness is the point.

Maybe the problem is that we're talking about a new mode of collective trauma. Not a specific event, like 9-11, so much as a great flow of ongoing traumatic events. Rolling trauma after the model of rolling news. News becomes the paradigm of trauma (because a news story must be a story, which means: drama, conflict, peril, and increasingly means big-budget destruction and catastrophe; which in turn reverts upon the news element in news story). The major forms of contemporary entertainment parse story (or plotting: the stories are variants of a very few baseline fabulae) via strong emotion, after all. And the thing about trauma is that it is a royal road to both those things at once. To suffer a trauma is to have a strong and compelling story imposed upon the otherwise undifferentiated stuff of our day-to-day; it is to impose a 'before' and an 'after' on memory, to create potent negative emotions that in turn provoke potent positive ones, for instance, of revenge, and rightfulness, and meaningfulness. I'm struck by something Adam Phillips said a few years back: 'Trauma theory is only properly secular when it stops needing to be morally reassuring; when it stops having to reinsert a plot. When we were being told that the world would never be the same after 11 September, that we would never forget that day, we were being reassured—i.e. coerced into believing—that we can still recognise a meaningful event when we see one.' Coerced into believing is another way of saying meaningfully held inside, which is another way of saying: meaningfully entertained. The grandiosity of contemporary entertainment is that it is all significant, that it all means, even as we all accept that it's all transient and worthless and meaningless. This explains our culture's abiding fascination with ways of quantifying significance, from box-office totals to top ten lists and prizes and numbers of followers on social media. We want to believe that it matters; and we want to believe that its mattering can be quantified, even as we understand, on some level, that the things that really matter are by their nature unquantifiable. We want to be held. We want to be entertained. Do we not?
Posted by Adam Roberts at 13:56