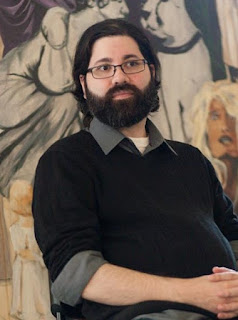 It's been a couple of weeks since my friend Scott Eric Kaufman died. He was 39. I've been sitting on the notion of writing a blogpost memorialising him for a while, and although I'm (evidently) now attempting just that, I'm still uncertain whether it's a thing to do. It seems an inappropriate forum for registering grief, somehow. And yet one of Scott's greatest accomplishments was to forge an idiom by which brilliant and serious critical work could be done via blogs and other online modes. His critical intelligence was both deep and wide, lively and compassionate and insightful, and although he cornered the market in illuminating analyses of the formal composition of visual texts he had a restless curiosity about a whole range of literary, historical and philosophical matters, and wrote superbly on all of these things. Above all he was funny: a brilliant observationalist with a wonderful gift for comic phrasing. Trust me when I say: that stuff is much harder to write than it looks; and Scott was a natural. If I had to pick one word to describe his mind it would be witty: his deft, capacious and penetrating wit is palpable in pretty much everything he did.

I got to know him when we both blogged for the now-defunct 'literary organ' The Valve and we became friends in the first instance without ever meeting face-to-face—that characteristically 21st-century state of affairs. I wrote him into my novel New Model Army as a minor character (he's the young professor researching the battlefront in a Watchman T-Shirt) and he was so pleased I did it again, in my forthcoming novel. He knew this was coming, but I'm sad that he'll never see it in print now. We met in person when he came over from the States to stay with us a few years ago. His stay was elongated by the fact that that Icelandic volcano Eyjafjallajökull decided to erupt and his return flight was cancelled. He cooked us Southern cuisine and it was delicious. He slept half-sitting-up in an easy chair—we had a spare bed, but he preferred the semi-recumbent posture for reasons to do with the longterm effects of his cancer (in remission at that time, but still impacting his health), the same cancer that eventually claimed him. He joined us when I drove my wife and our kids to synagogue on the Saturday: I think, as a Jew, he was curious to see what an English synagogue looked like. Eventually he was able to return to the States, but I flatter myself that it was during his time with us that he picked up his taste for Doctor Who: he'd never seen the show before, he said, but a little saturation UK telly viewing turned him into a fan. Like all his many friends, I'm desperately sad that he has gone.
Posted by Adam Roberts at 10:54