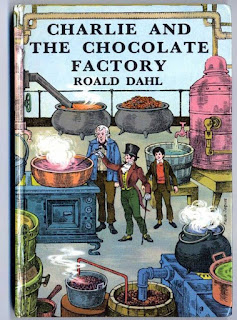 Charlie and the Colonial Factory. In the first edition of Dahl's perennially popular fantasy (published in 1964 in the US, and a year later in the UK) the Oompa-Loompas are pygmy Black Africans: 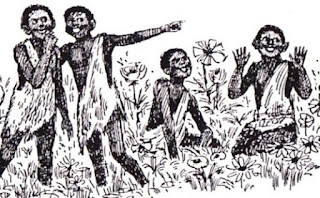 They live in the jungle with only squashed insects and caterpillars for food; Wonka visits them, promises to give them all the chocolate they can eat if they agree to come and work for him. So they do: they travel to wherever the chocolate factory is located (for reasons that become clearer later in this post I'm going to say: England—the book doesn't specify). They live and work in the factory; they are never allowed to leave; they get no money for their labour; Wonka insists they are happy. That is to say, they are, straightforwardly, African slaves working for a white overlord. It strikes a rather po-faced note to insist upon this, but it's true nonetheless: Charlie and the Chocolate Factory is a hidden-in-plain-view celebration of Western colonial exploitation.

In one sense I'm being, I know, deliberately over-literal. Wonka's chocolate factory is a fantasy realm, more like Alice's wonderland than any real factory. Fine. But the racial problematic of these Black African Oompa-loompas was sensitive enough, even in the 1960s, to mean that they couldn't stand. 'It didn’t occur to me that my depiction of the Oompa-Loompas was racist,' Dahl later claimed; 'but it did occur to the NAACP and others ... which is why I revised the book'. So in later editions they became miniature white hippies from Loompaland, although still dressed in the sort of rags more often associated with 'savages': 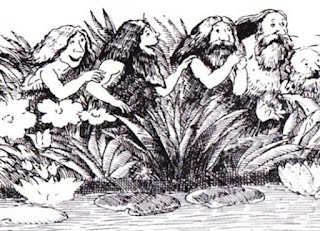 Then came 1971, and the movie (which Dahl himself hated, although it made him a ton of money and boosted his sales considerably) Willy Wonka and the Chocolate Factory, in which the Oompa Loompa's are reimagined again: 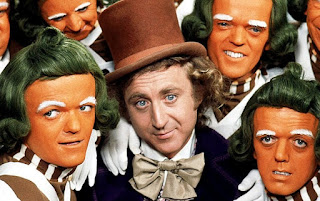 This is surely the most famous visual iteration, although it is, when you look at it, pretty damn peculiar. I suppose the idea was to remove the Oompas from racial representations altogether and reposition them as creatures of pure fantasy. But of course the repressed—here, 'race'—always returns, and with a vengeance, as Freud says it always must. Because these improbable-looking individuals are so emphatically Irish-flag in their coloration, so green, white and orange, that they shoot straight past 'vaguely leprechaun in provenance' (which, one presumes, is what the director was aiming at) and land on race again: another ethnic group, driven from their land by famine, working mostly as laborers, subaltern, subject to discrimination and so on. Irish-Americans do not have the same depths of malignity in their historical backstory as African-Americans, of course; but there's certainly been no shortage of anti-Irish racism in the West. Burton's more recent movie adaptation split the difference, racially, by using CGI to create a whole army of Oompa Loompas all played by one man, Kenyan-born British-Indian actor Deep Roy. 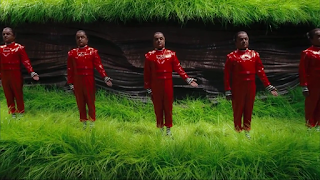 At least this is a mode of representation that acknowledges 'race' to be a salient. Quentin Blake's decision to re-imagine the baseline Oompa Loompa as, basically, an over-hair-gelled Sting looks like its trying too hard to avoid the issue of the 'otherness' of White Western racial representation: 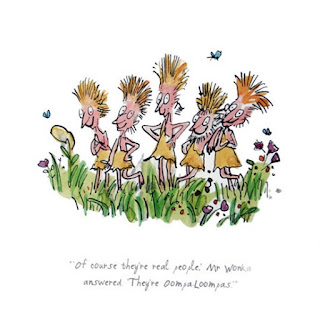 I'm in danger to leaning too heavily on this aspect of the story, I know. Sometimes a chocolate cigar is just a chocolate cigar; and many adults enjoy stuffing themselves with sweets just as much as kids do. On the manifest level (as it were) this is a comic fantasia about how wonderful it would be to be plucked from childish poverty by an eccentric billionaire and given the keys to a chocolate factory. Kids like chocolate. But we're entitled to read it on, as it were, the latent level as a fantasy of imperial domination. Not so latent, either, really: the sweetness (the wealth) extracted from Africa by imperial appropriation.

After all, as a young man Dahl had been an agent of Empire, working for the Shell Oil company in Tanganyika (modern-day, Tanzania), living in luxury with many Black servants to cook, clean and attend him, in a large house outside Dar-es Salaam. His account of this period in his life in Going Solo (1986), though entertaining, is marinated in unconsidered racism to such a degree it makes genuinely uncomfortable reading today. The Black Africans Dahl describes are simple-hearted, loyal, bright-eyed servants to a man. When war breaks out, Dahl organises some of them against the anticipated German invasion of Tanganyika, and they reveal reserves of savagery. They could not be more representative of a particular Western imperial stereotype.

It all makes me wonder if the 'latent' meaning of these kids and their visit to the chocolate factory is less hidden than we might think. Chocolate is one of the sweet fruits of colonial exploitation of Africa. The old coloniser (let's call him, "Willy Won-Kurtz") must pass over his imperial possessions to a worthy heir: the material wealth, the means of production, the black slaves who labour for him, the whole kit-and-kaboodle. So, from the point of view of a dedicated British imperialist: who are the rivals for this possession?

Germany, for one: Dahl literally took up arms to prevent German expansion in East Africa. No, the Germans are not (so far as Dahl is concerned) worthy of this prize. And so it is that Augustus Gloop, the greedy 'Bavarian Beefcake', is the first to go, plunging into the chocolate river, and thereby choking on his own imperial ambition. 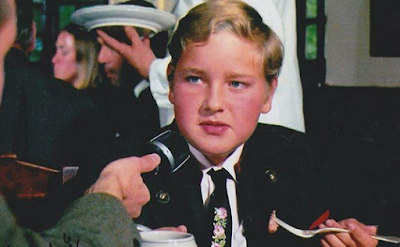 Who else's rival colonial-African ambitions might interfere with British manifest destiny in the continent? The Belgians? The French? Violet Beauregarde, with her egregiously Francophone surname, is next to go. Who else? Well there's 'Capitalism', wealthy but vacuous, owing allegience to no one nation but willing to despoil all for profit, and represented here by the spoiled brat Veruca Salt and her billionaire father. Mere money, without even the fig-leaf of imperial ideology, is mere rubbish, and down the rubbish chute it goes. That leaves only one global power: America, here represented by the television- obsessed shallowness of Mike Teevee, more concerned with his narcissistic desire to be on the gogglebox than anything else. One by one Dahl shoves them out of the frame, leaving only good honest Charlie Bucket: salt of the earth, incorruptible, neither too wealthy nor too foreign, the proper heir to take over all these imperial holdings when the time comes to poke our head round the door and announce "Mr Won-Kurz—he dead".