G. Wilson Knight quotes F. W. H. Myers from the Other Side 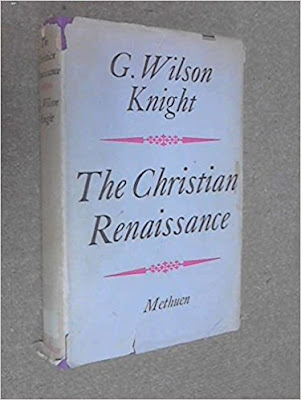 When I was at school in the 1970s and early 80s we were prompted to read G. Wilson Knight on Shakespeare: The Wheel of Fire, or excerpts from it. And when I went to University we were pointed towards his book on the late plays, The Crown of Life. But it seems clear that whatever reputation he once had has been pretty comprehensively eclipsed now. That may or may not be deserved, I don't know.

What I didn't realise until recently was the sheer oddness of which he was sometimes capable. So, there, at the head of this post, is his The Christian Renaissance, with interpretations of Dante, Shakespeare, and Goethe, and a note on T. S. Eliot (1933); a little musty, literally and figuratively, and quite fruitily written, but with some interesting things to say about Dante and the others.

Towards the end of the book Knight is discussing the youthful form angels took in medieval and Renaissance representation: ‘The angels announcing the Resurrection in medieval plays were performed by boys, and the ritual of the Boy Bishop assumed a central importance’ [Knight, Christian Renaissance, 334]. Then he quotes F. W. H. Myers:


Our remarks in this section may be neatly summed up by two quotations from the great spiritualist F. W. H. Myers.


I venture now on a bold saying; for I predict that, in consequence of the new evidence, all reasonable men, a century hence, will believe the Resurrection of Christ, whereas, in default of the new evidence, no reasonable men, a century hence, would have believed it. The ground of this forecast is plain enough. Our evergrowing recognition of the continuity and the uniformity of cosmic law has gradually made of the alleged uniqueness of any incident its almost inevitable refutation. Ever more clearly must our age of science realise that any relation between a material and a spiritual world cannot be an ethical or emotional relation alone; that it must needs be a great structural fact of the Universe, involv ing laws at least as persistent, as identical from age to age, as our known laws of Energy or of Motion ... [Myers, Human Personality and its Survival of Bodily Death (Abridged Edition, 1927)]

Myers was a classical scholar and in communications purporting to come from him through the automatic writing of the famous automatist Geraldine Cummins (Beyond Human Personality, 1935) explicitly relates the world which he calls ‘Eidos’, on the plane above the etheric, to the culture of ancient Greece:


Further, this Greek vision dimly reflects existence in that world beyond death which I have called ‘Eidos’. It conveys, shadowily, the spirit of that splendid world, where the subtle body, in glowing perfection, expresses form in its greatest and in its highest intensity, where the mere act of living may be accompanied by an exultation that transcends the lofty ecstasy of the greatest earthly artist. [1.21]

Even in the realms beyond Eidos the Greek ideal persists: all who share this spirit of high endeavour may cross that threshold and, pausing on the edge of the Immensities to gaze backwards, perceive the limitations of the crude, dense first disguise, and the perfection of the second and finer disguise. Its perfected form embodies beauty such as the great Greek sculptors dreamed of and by which the great poets, musicians, painters and prophets of all time have been inspired. [X. 100]

Here we may see a new precision in Diotima's insistence in The Symposium that Eros constitutes the link between man and divinity. These quotations from F. W. H. Myers, so similar in style, composed before and after his own earthly ‘death’, contain together a wisdom which our era may find it hard to assimilate. But the task is worth attempting. [Knight, 335-36]

I still can't quite get my head around the fact that Knight is, with a straight face, quoting what another critic said from beyond the grave. Indeed, I may start emulating him in this. Think how it would free up my own academic writing! ‘I was speaking to T. S. Eliot just the other day and blush to report with what enthusiastic endorsement he praised my own science fiction novels ... ’
Posted by Adam Roberts at 08:54