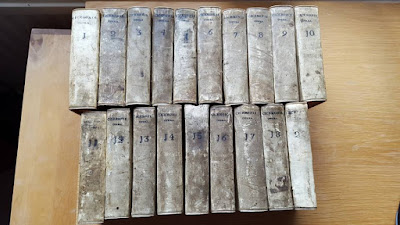 Just back from a lovely two week family holiday on the Black Isle, hence the paucity of posts lately. The above (click to embiggen) is my personal souvenir of our time in Scotland: found in a strange, rather tatty secondhand bookshop in Dingwall. Vol 19 is missing so it wasn't as expensive as it might have been: but vellum-bound, 1749, bee-ootiful, and I couldn't resist. 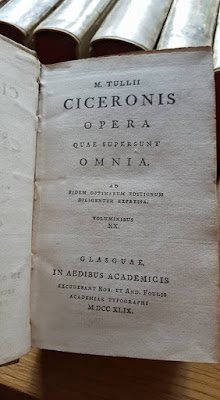 I bought it because I don't know Cicero as well as I ought and because my Latin is very, very far from being good enough—I mean, in a general sense. I propose to address these two delinquencies over my sabbatical, in part by reading some volumes of this edition. I've read only a couple of Ciceronian bits and pieces in English, and the only thing he wrote where I've so much as glanced at the Latin is this brief piece of proto-SF. 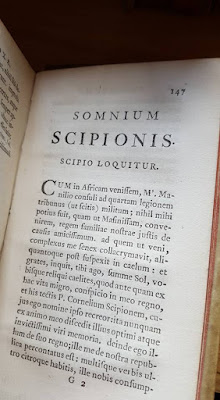 The bookplate is that of the Fortescue family, a Barony in the 18th-Century, an Earldom nowadays. 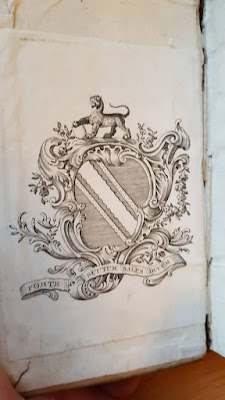 I find it fascinating to think that, only a couple of years after the Jacobite rebellion turned Scotland completely upside down, and as the bloody aftermath was going on all around them, Glasgow printers were sedulously assembling this complete edition of Cicero. I know Glasgow was a predominantly Whig town during the '45, and maybe it escaped the more severe retaliations by the English. Even so!
Posted by Adam Roberts at 13:40