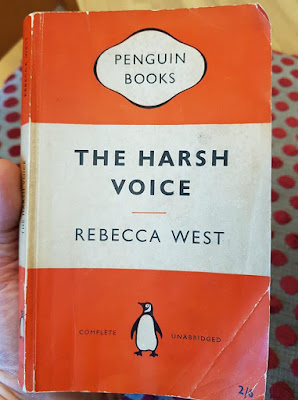 I'm reading West only in part because she's a major if neglected 20th-century author (though she certainly is) and more, if I'm honest, because I have to write this H G Wells biography thing and West loomed so large in Bertie's middle life. To that end I've previously blogged about her first novel The Return of the Soldier (1918) and also had some things to say about her semi-autobiographical novel The Fountain Overflows (1957). And now here's The Harsh Voice (1935), a collection of four novellas.

The first, ‘Life Sentence’, is about a marriage that fails. Sam Hartley is engaged to the beautiful Josephine Houblon, but right at the start of the story he tells her ‘Josephine you'll think me just the dirtiest skunk in the whole world but I can't help it: I've got to tell you. Josie, I can't marry you’ [12]. Josephine however proves disinclined to release him from his promise and so they do get married after all, and both make a material success of life (Sam in business, Josephine by investing in real estate) and have three children, two girls and a boy. But the marriage never really works, and by the halfway point in the story they are divorced. Josephine marries young Jack Lambert (to Sam's disgust: ‘that college boy? You don't want a husband. You want a cheer-leader’ he sneers [39]) and Sam finds contentment in marrying a young girl the story doesn't even name (‘she was the prettiest girl in town and she had a nice steady temper’ [43]). But though Sam and Josephine genuinely dislike one another neither can quite purge the other from their lives. The story's denoument happens after the 1929 crash when they agree to travel to the neutral ground of a Chicago hotel for a meet-up. Sam thinks Jospehine has lost all her money in the crash and resolves to help her financially, telling himself it's for the sake of their kids; but it turns out she thinks exactly the same thing about him. And on that misunderstanding, and the open-ended suggestion that this is not the end for them as a couple, the story closes.

The longest tale here, ‘There Is No Conversation’, is also the best. It starts when our narrator bumps into her old aquaintance, the vain, ageing Marquis de Sevenac on the streets of Paris. He invites her up to his apartment to view his art collection—for the last time, he says, since his personal fortune, all tied-up in US Railway stocks and shares, has just been wiped out. Hélas! But how? He spends thirty pages telling our narrator the circumstances. It all has to do with an affair he recently conducted with a visiting American woman: Nancy Sarle, plain and middle-aged, but with piercing blue eyes. This was a love affair the Marquis entered into partly through pity, partly because it flattered his vanity to be able to show her around his city, and partly on mere whim. When he first wooed her he had no idea who she was, and realised only belatedly that she happens herself to be an immensely wealthy railway magnate. But the Marquis doesn't care about that, since he is himself so well-off. But then, she falls in love with him and things become tiresome. He has a new belle now and so he breaks things off with l'Américaine quite ruthlessly. Later he discovers Sarle has used her position on the stock market to destroy the value of his shares, and that he is ruined. The narrator dislikes de Sevenac for his self-centredness, his desperate clinging to his long-vanished youth, but indulges his complaining narrative. When she later finds herself in New York she tracks down Nancy Sarle, befriends her and eventually hears her side of the story from Sarle's own mouth.

Sarle is an interesting piece of characterisation, actually, especially for 1935: a highly successful businesswoman, plain-talking and no-nonsense, entirely unillusioned about her own lack of pulchritrude (‘I wasn't dolled-up like the women he went with, I never had as much looks as a street car’). She assumes at first that he's after her for her money, and is content to play along while she's enjoying herself; but when she discovers he is, himself, very wealthy her self-possession takes a knock. If he's not after her for her money, then why is he with her? Might it be that his professions of undying love were not just amorous convention, but actually heartfelt? And when this idea occurs to her it creates the equal-and-opposite reaction: what if she's in love with him? The story's subplot has to do with Sarle's complicated Wall Street strategy to ruin the value of one of her American rival's stock, something she's been planning for years. But this strategy is suddenly threatened: because these are the shares upon which Etienne de Sevenac's wealth depends, and she doesn't want to ruin the man she is in love with. There are two twists at the end: one, when Sevanac angrily insists he never had feelings for her it makes her abruptly and unexpectedly happy: it clarifies the situation and means she can go ahead with her stock-market play. The second twist has to do with the narrator, and I won't spoil it here.

The other two novellas in this volume aren't, I think, quite up to the standard of these first two.‘The Salt of the Earth’ is a pen-portrait of Alice Pemberton, a sensible, middle-class, middle-aged Englishwoman, self-declared salt of the earth, who interferes with the lives of those around her for, she thinks, the best reasons, but who—spoiler—dies, having been handed a fatally poisoned cup of hot chocolate by those very friends (‘nobody likes having salt rubbed into their wounds,’ one of them tells her, ‘even if it is the salt of the earth’ [171]). The mix of ordinariness and melodrama, here, is only intermittently successful. Then there's ‘The Abiding Vision’ the story of Sam Hartley, a successful businessman, who loves his wife Lulah in a rather distant way, gets something more immediate from his relationship different out of his relationship with his mistress Lily, and who eventually cracks under the pressure of it all. It's a good piece of writing, although perhaps lacks the expressively oblquity of the first two in the collection.

There are a few places where the writing wobbles. Here's West's description of a character called Judy Mandeville:


A girl of twenty-one who had come to them to rest up after her first divorce. a slender creature who has the bright colour and the air of being coated with syrupy juices characteristic of canned fruit. [33]

Er ... what? And here's Josephine—a regular, indeed a beautiful, woman, and not as you might think from this description a scoliolis-blighted cripple:


Jospehine was standing in the doorway. There was always a suggestion of something spiral about her, as if under her clothes and her flesh there coiled up a spring, and the long dress she was wearing made this seem more so than ever. [49]

I think moments like these (and, in amongst some very finely written passages, there are various examples throughout the book) bother me more than they might otherwise because West is trying for a series of quite precise effects, and indeed affects. There's still a sense, here, that her instrument isn't calibrated to quite the Nabokovian exactness her larger themes need. Still a very memorable and powerful collection of stories, though.
Posted by Adam Roberts at 04:06