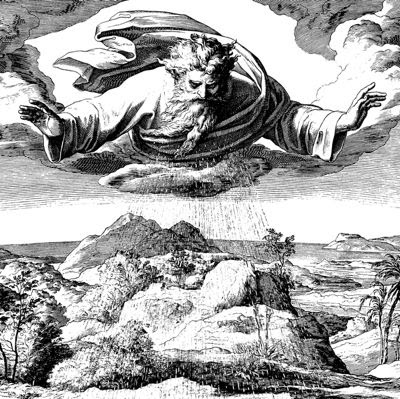 1: 1 In the beginning God created the heavens and the earth

1: 2 And the land was dull, and darkness and darkness were upon the face of the abyss, and the Spirit of God was hovering over the water.

1: 3 And God said, Let there be light, and there will be light

1: 4 And God saw the light, for it was good, and God separated between the light and the darkness.

1: 9 And God said, Let the water under the heaven be gathered to one place, and the land shall appear, and it shall be so.

1:10 And God called the land dry, and to the waters of the waters he called, and God saw that it was good.

1:11 And God said, Let the earth grow on the grass, Grass that sows seed, A tree of fruit, Make fruit for his wine, which they sow on the land, and it is so.

1:12 And the earth brought forth grass, grass that sowed seed into its kind, and a tree that made fruit, which they sown in its kind, and God saw that it was good.

1:13 And it was evening, and there was morning morning.

1:14 And God said, Let there be light in the firmament of the heaven, to distinguish between the day and the night, and be for the dead, and the seasons, and the days, and the years.

1:15 And they became a den in the firmament of heaven, to shine upon the earth, and it was so.

1:17 And God put them in the firmament of heaven to shine upon the earth.

1:18 And for instance by day and by night, and to distinguish between light and darkness, and God saw that it was good.

1:20 And God said, The waters shall flow forth, that a living soul shall flow, and a bird shall fly upon the earth upon the firmament of heaven.

1:21 And God created their great things, and all the living souls that were thirsty, which the water desired for their kind, and every winged bird of its kind, and God saw that it was good.

1:22 And God blessed them, saying, Be fruitful and multiply, and fill the water with the days, and the birds shall multiply in the land.

1:24 And God said, Let the earth bring forth a living soul, a kind of beast, and a herd, and make a land for its kind, and it shall be.

1:25 And God made the beast of the land for her kind, and the cattle for her own kind, and all the sheaf of the earth for its kind, and God saw that it was good.

1:26 And God said, Let us become a man in our image as our figure, and go down in the fish of the sea, and in the birds of the heavens, and in the cattle, and in all the earth,

1:27 And God created man in his image in the image of God;

1:28 And God blessed them; and God said to them, Be fruitful and multiply, and fill the land, and conquer it, and go down in the fish of the sea, and in the bird of the heavens

1:29 And God said, Behold, I have given you all the seed of seed, which is on the face of all the earth, and all the tree wherein is the fruit of a tree;

1:30 And to every beast of the earth, and to all the birds of the air, and to every rosette on the ground, wherewith a living soul liveth every herb of grass, to eat it, and it shall be so.

1:31 And God saw all that He had done, and behold, it was very good, and it was evening, and there was morning, the sixth day.