Be is To Be 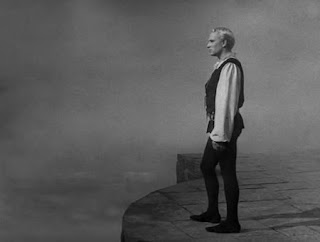 I'm very persuaded by my friend Ewan Fernie's reading of this Shakespearian soliloquy:


To be or not to be – that is the question:
Whether 'tis nobler in the mind to suffer
The slings and arrows of outrageous fortune,
Or to take arms against a sea of troubles
And, by opposing, end them. To die, to sleep
No more – and by a sleep to say we end
The heartache and the thousand natural shocks
That flesh is heir to – ‘tis a consummation
Devoutly to be wished. To die, to sleep
To sleep, perchance to dream. Ay, there's the rub,
For in that sleep of death what dreams may come,
When we have shuffled off this mortal coil,
Must give us pause. There's the respect
That makes calamity of so long life.
For who would bear the whips and scorns of time,
Th’ oppressor's wrong, the proud man's contumely,
The pangs of despised love, the law's delay,
The insolence of office, and the spurns
That patient merit of th’ unworthy takes,
When he himself might his quietus make
With a bare bodkin? Who would fardels bear,
To grunt and sweat under a weary life,
But that the dread of something after death,
The undiscovered country from whose bourn
No traveler returns, puzzles the will
And makes us rather bear those ills we have
Than fly to others that we know not of?
Thus conscience does make cowards of us all,
And thus the native hue of resolution
Is sicklied o'er with the pale cast of thought,
And enterprises of great pitch and moment
With this regard their currents turn awry,
And lose the name of action.

He asks students to take the question in the first line seriously: Hamlet gives himself two options (being, not-being). Which does he go for, in the end? Well clearly he decides to be: not to end his life with the bare bodkin; to eschew suicide and carry on. But he arrives at that decision by a curious route. In plain terms he considers life ('being'), and notes its many agonies ('the whips and scorns of time,/Th’ oppressor's wrong, the proud man's contumely,/The pangs of despised love, the law's delay,/The insolence of office, and the spurns/That patient merit of th’ unworthy takes'). But then he considers the alternative, death ('not-being') and finds that just as bad, or possibly worse. Another way of putting this would be to say, he looks to 'not-being' and finds that it is actually just another sort of being. In other words his decision 'to be' is arrived at, paradoxically, through a process of rejecting 'to be' not once but twice; finding fault with two modes of being and still concluding that he must be. This profound ontological negativity, or perhaps confusion, has important resonance for the play as a whole; a text whose opening is dominated by an entity, the ghost, who is precisely strung ambiguously between being and not-being.
It sent me back to the monologue. And that in turn got me thinking about 'quests'.
Quest is an interesting word I think, although now rather bleached of meaning by its endless reiteration in the context of (for instance) Fantasy narratives -- interesting not least as a sort of conceptual structuring principle. OED says a quest is 'a search or pursuit made in order to find or obtain something'; as well as 'in medieval romance: an exhibition or adventure undertaken by a knight to procure some thing or achieve some exploit.' The word has an obvious etymological relation to 'question', although it is, of course, a literalised exteriorised version of the process of mental enquiry. Or to be precise: it orients the question elswehere. OED also quotes the Romance of Merlin (1450): 'thei entered into many questes forto knowe which was the beste knyght.' In other words, the quest arrives at a conceptual answer (which is the best knight) by arriving at a material object. That's important.
Shakespeare writes blank verse (famously, so). But the first five lines of this, his most famous speech, amount to hendecasyllabics (only with the 'end' at the end of line 6 do we fall back into a decasyllabic rhythm). And part of the memorableness of that appallingly famous first line has to do with the way it spills beautifully over the limit of ten syllables we so strongly associate with blank verse, as well as the way the stresses of the verse reinforce the existential vehemence of the question. 'To BE or NOT to BE,' pause, 'THAT is the QUEST.' The '-ion' comes after, leaving us with that spectral sense that 'to be or not to be' is not so much a question as a quest. And in turn that not only points up the memorable trope of death as a linear, one-way journeying ('the undiscovered country from whose bourn/No traveler returns...') it also carries with it the sense that such journeying is towards a palpable object, the reification of 'being/not being' itself. We might, if it didn't sound too facetious, say being, or the knot-(of)-being. The thing.
Posted by Adam Roberts at 08:48