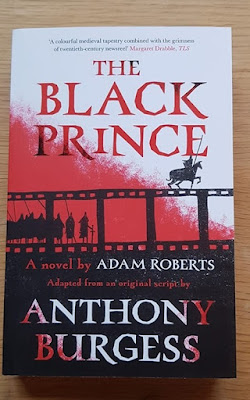 Today sees the mmp publication of The Black Prince. To mark this auspicious moment I'm going to share something special with the readers of this blog.

When I took Burgess's original idea (that is: the idea of a medieval historical novel written in the style of Dos Passos) and worked it up into The Black Prince I, and Andrew Biswell, who heads-up the Anthony Burgess Foundation in Manchester, believed AB himself had not actually drafted any material towards the work. But then Andrew dropped me a line to say he'd discovered one solitary page—page one—of what we have to assume was an abortive attempt by Burgess actually to write out the book. I'm copying that page here, so you can see the difference between the echt Burgess and my four-decades-later reimagining of Burgess's idea. Have a care, though, if violence and sexual violence are liable to trigger you. It doesn't hold back. 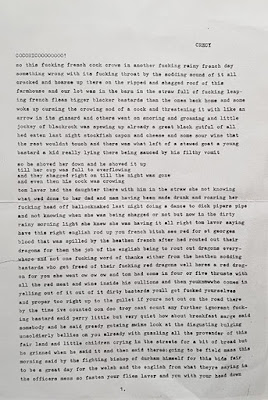 Click, as they say, to embiggen. It's fascinating for me to see this: original writing by Anthony Burgess that, so far as I know, only a couple of pairs of eyes at the Burgess Foundation—and me—have ever seen before. A shame there's not more of it; I'd like to see how he developed it.

As to the question of what I would have done if I'd known of this when writing my own version of the story (whether, that is, I would have incorporated it into what I was doing) I honestly don't know. When it comes to representing violence my Black Prince pulls no punches, I hope, but it's tonally not like this. I don't know if the casualness of the representation of rape, here, would be acceptable, or would even work, in a novel published in the twenty-teens (it is shocking, and that was evidently what AB was setting out to do; but I'm not sure mere shock is aesthetic validation enough). One point of commonality: the crowing rooster. That bird is the first thing mentioned in Burgess's screenplay, and the first thing mentioned in this draft page too.

My Black Prince also opens with a rooster, although because I was cleaving more closely to Dos Passos, opening with a Newsreel section, I turned my rooster into the ident of the old black-and-white British Pathé News film. 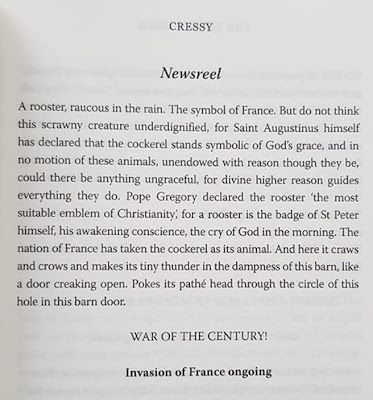 Of course, it's actually just a medieval rooster in a falling-down French barn. Pathé News wasn't invented for many centuries yet. (The novel, strictly speaking, opens with a preface called, for onbrand reasons and because of the novel's thematic of cavalry war as a terrible inundation or flood, ‘Prance, Noah!’ But you can ignore this and start with Part 1. Indeed, I urge and exhort you to do so.)

So it's publication day for the mass-market paperback edition of my novel. Buy a copy, why don't you, and see the ways in which my handling of this medieval material, whilst I hope Burgessian enough, differs from the actual typed-out Burgessia. And check out Unbound, my publisher here: they have all sorts of brilliant projects ongoing.
Posted by Adam Roberts at 00:04