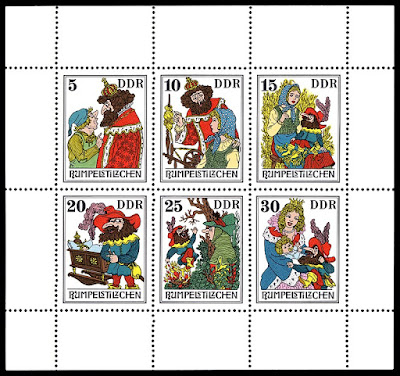 What's Rumpelstiltskin about? A boastful miller brags his young daughter can spin straw into gold. The greedy king seizes the girl, locks her in his castle and orders her to perform this magic or else he will have her killed. The despairing girl is saved by an odd little dwarf-geezer who finds his way (the Grimms' version doesn't make clear how) into the girl's straw-filled cell and spins the stuff into gold for her, enriching the king and saving her neck. In return the dwarf demands the girl's necklace. The next day the king has the girl taken to the larger room filled with even more straw, and orders her to repeat the trick. Once again the dwarf helps, this time in return for the girl's ring. On the third day, with the girl locked in an even larger room filled with even larger bales of straw, the dwarf again performs his magic. Since the girl has nothing left with which to repay him he insists that, when she gets around to having children, she give him her firstborn child. That, if you like, is the first act of the story

The second act sees the king marrying the miller's daughter. She gives birth to a child, and the dwarf returns to demand she make good on her side of the deal. When she weeps, and offers him riches instead, he relents only so far as to make her this offer: she has three days to guess his name. If she fails to do so he will take away her child. On the first day she guesses all manner of names (‘John?’ ‘Paul?’ ‘George?’ ‘Ringo?’) and all are wrong; on the second day she guesses again (‘Melchior?’ ‘Balshazar?’ ‘Caspar?’) and again she fails. But on the evening of the second day a servant chances upon the dwarf in the woods, dancing around a fire and, imprudently enough, singing this song:


Tonight tonight, my plans I make,
Tomorrow tomorrow, the babe I take.
The queen will never win the game,
For Rumpelstiltskin is my name.

On the final day, the queen correctly guesses Rumpelstiltskin's name. In the first 1812 edition of the Grimms' Kinder- und Hausmärchen the story simply ends here, with Rumpelstiltskin storming out and the king and queen living happily ever after. Much better, though, is the ending they included in their revised 2nd edition:


In his rage Rumpelstiltskin drove his right foot so far into the ground that it sank in up to his waist; then in a passion he seized his left foot with both hands and tore himself in two.

So what's Rumpelstiltskin about? Well, it captures some straightforward features of pre-industrial-revolution European life (before the invention of spinning jennies and industrial looms, and the subsequent mass-manufacture of cheap cloth, spinning and weaving were very useful practical skills; women's work, in the main, and a wife who could spin and weave was a highly prized asset in a household). And the larger trajectory of the story is one common from many other Grimms' tales, that specie of wish-fulfilment that says: you, ordinary child that you are, will discover life to be a matter of challenges to be overcome, but if you can hold true, and pass these tests, providence will reward you with a good husband and wealth and status. It's not complicated so far as wish-fulfilment fantasies go, but its uncomplication doesn't correlate to any lack in psychological force or appeal.

What about the strange little fellow who has access to the king's castle, and who provides gold in return for his pound of flesh? An anti-semitic caricature, is it? ‘Rumpelstilzchen’ a folk-tale generic Ashkenazi-style surname, maybe? Rumpelschaechter, Rothschildstiltskin, that kind of thing? Hard to gainsay such a reading (Hitler mandated that every German household should own a copy of the Grimms' collection, describing these tales pure expressions of the authentic German Volk that taught children the sound racial instincts of seeking racially pure marriages). Then again, the antisemitism of the Grimms' tales doesn't usually veil itself: there are various stories in which wicked Jews appear, as Jews, and are punished. But that's not to acquit this tale, I think.

Rumpelstiltskin is a dwarf. What's ‘he’ about? A dwarf is an adult with the stature of a child. What is curious, or compelling, or perhaps ceepy about such figures (in popular culture, I mean) is the way they confuse the boundary of childhood and adulthood. And that's why this odd little man is the right figure for this story, isn't it: this peculiar helper-antagonist hyrbid. Because that's what Rumpelstiltskin's about, clearly. It's not so much a story for children as a fable about children. In what way can women, those (don't @ me: I'm ventriloquising an 18th-/19th-century rural weltanschauung when I say so) worthless creatures, generate wealth out of their uselessness? If you have sons, they can work your farm, or chop your trees down, or do whatever it might be you need doing. Sons can inherit you. Sons can carry your name forward (important, for a story in which riddling namelessness is the key salient). What can women do? Domestic work, yes, like cooking and cleaning, and indeed spinning, but that's not gold, now, is it. Ah but here's something women can do: they can have sons. They make babies, and babies are wealth. Millers need heirs just as kings do. Children are a tax upon the future, since they cost money to raise and keep, but they are also the only true investment in the future humanity can ever make. The only wealth, as Ruskin says, is life. Rumpelstiltskin is the conflicted symbolic articulation of this truth: this magic little man, the maker of wealth from nothing, who appears as if from nowhere when a girl gets to the age of puberty, and who is a threat only insofar as he remains nameless (for an heir is useless without a family name to carry with him). That, surely, is what that striking scene of Rumpelstiltskin's bizarre end means: a fantastical extrapolation of childbirth itself, in which a woman is painfully (yet also happy-ever-after-ishly) split-open by the process of bringing the golden child into the world.
Posted by Adam Roberts at 07:13