Talking Back To Fiction: or, Gee, I Really Hope Somebody Got Fired For That Blunder 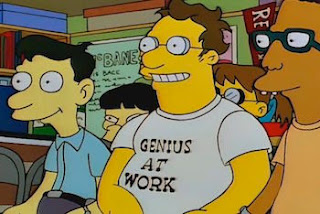 In a 2004 essay on philosophical fiction the late, lamented Jerry Fodor argues that, though ‘the philosophical novel’ is a well-established mode, viz. ‘Comp. Lit. 102: readings in Dostoevsky, Kafka, Mann, Gide, Sartre’ (‘little or no philosophical sophistication required’), in fact philosophy and fiction aren’t particularly miscible. Fodor sees metaphysicians and novelists as doing quite different things: ‘practically by definition, theories traffic in abstractions; they purport to see where the eye does not. Novels, by contrast, tend to be concerned with the surfaces of things.’ Then he says this:


Philosophical theories are worse candidates than most for novelistic treatment. The whole function of a philosophy is to be argued with, pro or con, and it is churlish to argue with a novel: ‘Call me Ishmael.’ I won’t! ‘About two in the morning he returned to his study.’ In fact, it was nearer 3.15. You can’t talk back to a novel: ‘What’s that supposed to mean?’ and ‘Why should I believe that?’ are out of place. But these are the queries that philosophers want to test their theories on; not just because philosophers are churlish by profession, but also because theories to which such questions aren’t posed can get away with murder.

Reading this I was, to use the old nautical cliché, taken aback. If Fodor had spent as much time in the halls of Science Fiction and Fantasy fandom as I have, I fancy he wouldn’t have been so blithely confident that readers of novels don’t answer back. Nor is it just SF/F, of course. As with many things, The Simpsons has a meme for this. In ‘The Itchy & Scratchy & Poochie Show’ (s8 ep14, first shown 1997) the ‘Itchy and Scratchy’ producers decide to liven the show by adding a new character—voiced by Homer—Poochie, a dog with ‘attitude’ who surfs, raps, and plays electric guitar. Homer accompanies the stars of the show at a fan convention, when they field questions like this:


“In episode 2F09, when Itchy plays Scratchy's skeleton like a xylophone, he strikes the same rib twice in succession, yet he produces two clearly different tones. I mean, what are we to believe, that this is some sort of a... [nerdy chuckle] a magic xylophone or something? Gee, I really hope somebody got fired for that blunder.”

It’s funny because it’s true. It’s been recognised as true (and therefore funny) at least since William Shatner’s Saturday Night Live ‘Get a Life!’ sketch in 1986. Fans talk back to their novels (and films, and games, and comics) all the time.

I suppose it’s the case that a hefty proportion of fans talking back concerns franchises rather than single texts, because one thing that grinds fandom’s gears is: inconsistencies in worldbuilding and character-development. This can be specifics, where things happen that don’t fit the material specificities of earlier instalments, or where the timeline goes screwy, or it can be more about a perception of tone, or vibe: as when fandom divides into two shouty cohorts, one declaring vehemently that Star Wars Corporate Product Movie/Game/Novel x+1 doesn’t ‘feel’ like a proper Star Wars text and the other insisting just as vehemently that it does. “J J Abrams’ can’t capture the true Star Wars-ness of Star Wars” is one version of this argument, which is interesting to me in that if the Star Wars sequel trilogy shows one thing very clearly it is Abrams sweating with the exertion of pastiche-ing Star Wars as energetically and completely as possible, cramming in as many easter eggs as the basket can hold. That, though, doesn’t capture echt-Star Warsosity for many.

But bald issues of consistency and canonicity aren’t the only things that provoke fans to answer their texts back. Another is: problems with diversity, the use of derogatory stereotypes and so on. A third, more meta- point of fannish engagement has to do with genre itself. Many’s the SF fan who will talk loudly back at even a standalone SF novel because it is not ‘proper’ SF, or because it doesn’t get the physics right, or is too long, or too short, or too infodumpy or whatever.

I was going to add something here to the effect that literary criticism is a mode of talking back at texts too, but actually I’m not so sure. In one sense, of course, it’s absolutely literary criticism’s job to look at a sentence like ‘Call me Ishmael’ and interrogate it. But the specific challenge Fodor presents—the ‘no! in thunder’ he implies—is rarely part of the idiom of literary criticism, actually. There have been one or two notable flame wars, but mostly we academic critics are politely, even mouse-ishly, happy to busy ourselves contributing to an ongoing accretive discourse. This may be one of the things that differentiates critics from fans, actually.

It’s also, of course, about the willing suspension of disbelief. One of my boy Coleridge’s most influential ideas, this, although I’m not sure I see that ‘will’ is actually the mot juste. We do indeed suspend our disbelief when we read, see a play or watch a movie, but this is rarely a matter of active will. It is, on the contrary, a habitual decoupling of aspects of our natural scepticism that we learn, or are acculturated into, when we’re young and that become second-nature by the time we’re adults. The withdrawal from scepticism could be called ‘gullibility’, and in a sense I suppose we are gullible for stories: fools for them, holy fools even. But there are degrees, or perhaps whole separate magisteria, within the realm of ‘gullibility’ and it’s possible to moderate our ingenuousness without shouting at the text ‘Emma Woodhouse handsome clever and rich …’ OH YEAH? FOR ALL I KNOW SHE WAS POOR AND UGLY—HELL, SHE NEVER EVEN EXISTED AT ALL, WAKE UP SHEEPLE. An argument with somebody can be a slanging match, sure; or it can be a civilised debate. The thing is, I’m not sure either paradigm describes what critics—and most readers—do with texts. Something far less specifically engaged, mostly. Something rather more passive-aggressive.

The point is that books can’t answer back, or not very well. If we’re arguing with a version of a book we have in our head then I suppose it might answer back, to some extent, but only in the echo-chamber sense that we're using the text to talk to ourselves, actually. If we’re arguing with an author—with J K Rowling for instance, something many hostile and abusive people do on social media daily—then we’ve missed the point.

Our talking-back at books, as fans and critics, is Socratic, but in a very particular sense of Socratic. I'm talking about the way Socrates knows it all, and his interlocuters know nothing, so that Plato has to gussy-up a series of what are, we can be honest, monologues with repeated interjections from the other guys of ‘how true that is!’ and ‘I see!’ and the like. T H Irwin puts it well: ‘Socrates conducts strenuous, maddening and one-sided discussions of moral questions with interlocutors who lack his argumentative skill. … Socrates needs to assume that his discussions with interlocutors involve a genuine and honest exercise of the interlocutors’ capacity for moral judgment, and that their capacity for moral judgment is both reliable and corrigible. … It is far more difficult to decide whether the assumptions are plausible.’ Assume it’s a free-and-fair exchange of views and you’ll probably conclude: they thrashed these complex ideas out and all agreed that Socrates is right! But we can be honest. A debate between Socrates and Some-schmuckates was never going to be free and fair.

I suppose another way of seeing these dialogues is picturing Socrates as Tom Hanks in ragged shorts with a huge beard and his interlocuters as a basketball with a face painted on it in blood. Of course they’re going to agree with Socrates. They exist in order to affirm that Socrates is right. That’s baked into the form itself. Can you imagine a dialogue that went…


SOCRATES: Do you not agree that ideas must be derived from a previous state of existence because they are more perfect than the sensible forms given them by experience? If the soul existed in a previous state then it will exist in a future state, for a law of alternation pervades all things. And, if the ideas exist, then the soul exists; if not, not.

CEBES: But I can hold in my mind the idea of an inexistent soul. Therefore, if my idea exists, the soul cannot.

SOCRATES: [long pause] You know what? You’re right. I hadn’t thought of that. Bollocks. Ah well, maybe I’ll get it right next time. Let’s grab some moussaka.

Of course not. That’s not the idiom of the Platonic dialogues. And my point is: this Socratic exchange is, actually, how we argue with our books. The books to which we subject our reaction are Cebeses and Menos and Critos, whose role is to nod and say ‘yes indeed’ and ‘truly’ and ‘of course’ and we monologue at them with our own obsessions and fascinations and needs and failings. As they talk about philosophy as footnotes to Plato, so the history of fan and critical engagements with literature is all footnotes to Plato.

One way of reading Barthes’ ‘Death of the Author’ is to see it this way, as a manifestation of the urge to keep our texts as Wilson-the-Basketballs and not have to complicate stuff by learning, let us say, that J K Rowling’s views on the reality of biological sex differs from ours, and whatnot. When this latter happens (which is to say, when a book we have interrogated Socratically to the point where its ‘Quite right, Socrates!’; ‘Correct!’; ‘Indeed, yes!’ and so on have convinced us that it cleaves to our very soul—reveals itself, in its author's eyes at any rate, to be doing something that doesn't, actually) the sting is sharp, and we can lash out.
Posted by Adam Roberts at 10:00