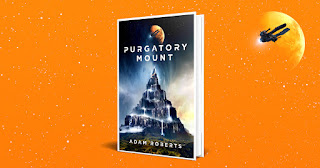 My new novel Purgatory Mount is out now, and available from all good bookshops.

Waterstones are selling it here.

Amazon uk, if you don't mind buying from them, here (and on Kindle, here). There's an Audible audiobook.

I also signed fifty copies, which Goldsboro Books are selling at no extra cost. I think these are the only signed copies going, aside from those occasional and individual books personally inscribed to friends and the like, so the usual publishing joke about ‘for sale, a rare unsigned edition of etc etc’ doesn't, in this case, obtain. I added a few annotations to a few of the Goldsboro copies too, as a kind of lucky dip. Not many though.

I'll do another post linking to reviews if and when, over the coming weeks.

A couple of readers have got in touch, or articulated their feelings online, to the effect that though they liked the book (I will of course also keep you informed of people who hate it, as many surely will) they weren't sure they entirely understood it. I have to confess that this rather gratified me, and not, I think, out of mere perversity. My worry, in writing the novel, was that what I was doing was only too clunkingly obvious, clunking obviousness being the enemy of art. I still worry about that, actually. Purgatory Mount is, as its title implies, a novel about forgiveness, its possibility or impossibility. I take either alternative seriously—I mean, generally, in the world, and so in the novel I have written. It seems to me one of the great matters of our time, actually: so much so, in fact, that the lack of art about it surprises me. I mean, I know plenty of art that, sometimes eloquently and powerfully, articulates outrage at and condemnation of the manifold wrongnesses in the world, but not art that explores the forgiveness of such wrongnesses. Perhaps I'm just not seeing the art that engages this matter; but I don't think I'm wrong that ‘we’ have a problem with forgiveness nowadays. That many of us don't choose to forgive (that we indulge, rather, the dark satisfactions of a targeted, often collective and vindictive unforgiveness). Or perhaps it's that we don't know how to forgive: or more specifically don't know how to forgive without feeling weak, feeling like suckers, feeling as though we're letting gross offenders ‘off the hook’—which is indeed what forgiveness does, of course, so I suppose I mean: without feeling as though the people we are forgiving don't deserve forgiveness. Maybe they don't. It seems to me that there are enormities so egregious they approach unforgiveability. But the ‘you don't deserve forgiveness!’ attitude runs hard into the fact that I don't, either. Who among us does, really? And a society in which there is no generally accepted mechanism for enacting forgiveness can never achieve, in the resonant South African phrase, truth and reconciliation. Somebody has done something, or said something, to hurt you: under what circumstances should you forgive them? It's obviously not for me to tell you what to do, or how to feel, and if I don't have that right then neither does anybody else. But, by the same token, a sociey in which there are no channels through which forgiveness can flow becomes a kind of hell. This is true in several related ways, I think. For example my friend Alan Jacobs, conversation with whom in part shaped the way this novel emerged, argues that ‘in a really important sense Hell is the refusal to be forgiven’, and I think he's right. Which is to say, Alan, as a Christian, understands how crucial forgiveness is to human community, health and flourishing, and is aware how often the Chrisian Right, as well as the radical Left, in his own country fail on precisely those terms. But even I, as an infidel, can see the wisdom in what he says, and am struck by how allergic the Left in my country are to forgiveness. Should Black people ‘forgive’ the history of European and American slavery and its centuries-long legacy of structural and individual racism? There is obviously no way I, a white Englishman, could possible insist upon such a thing. But let me ask the same question in different terms: should our children forgive us? Should their children? Do we deserve to be forgiven for poisoning and depleting the planet, wrecking the enviroment and bolstering a rapacious dog-eat-dog socio-economic system that leaves them indebted and stripped of life-opportunities? Do you deserve forgiveness for this? Do I? Is there an alternative to, on the one hand, a braying self-exculpatory denial (climate change is a hoax! the younger generations are lazy avocado-munching knaves!) or on the other, to our simply curling up in shame and expiring? Might there be some tertium quid, some knight's-move leap via which forgiveness becomes, liberatingly, possible? Some things probably are unforgiveable; but most things aren't, after all.

Purgatory Mount is moved in the first instance by that question: should our children forgive us? The novel's answer is by no means a facile yes they should. It is, rather, and as per the book's structure, a cerberusian three-headed thing: a hellish no, a paradisical (if sacrifical) yes and the main bulk of the book, by page-length, working its way through a more—I hope dialectical, but perhaps merely muddled—purgatorial dramatisation of the dilemma. This middle section perhaps does not arrive at a place that persuades you. I don't know if it persuades me, and I wrote it. All I know is that the place at which it arrives is the one that felt right, in a way alternatives just didn't, as I was writing. But the big question of forgiving others includes the smaller question of forgiving ourselves, and that latter strikes me as just as intractable.

I do feel, strongly, that forgiveness is inextricably linked to memory, individual and collective, that it can never bloom in a culture of forgetting. That's also, I think obviously (I fear: over-obviously) what Purgatory Mount is about. You could read it for yourself and see whether you think I get it right. But, of course, only if you wanted to.