After the two positioning chapters on ‘narrative’ and ‘affect’ Jameson moves into four case-study chapters: 3 on ‘Zola, or; the Codification of Affect’; 4 on ‘Tolstoy, or; Distraction’; 5 on Pérez Galdós, or; the Waning of Protagonicity’ and 6 on ‘George Eliot and Mauvaise Foi'. Is there an uglier neologism in the world than ‘protagonicity’? Still: not to digress.

The Zola chapter is lengthy but thin, buoyed with an elephant's parade of immense quotations from various Rougon-Macquart novels. Many of these are a page, or a page-and-a-half, or even two pages long; all are printed in small font; the French followed by an English translation. The argument is that Zola ‘offers some of the richest and most tangible deployments of affect in nineteenth-century realism’, and I suppose the superlong blockquotes are there to display such moments. Which is just as well, since when he glosses the passages J.’s prose tends to wax opaque:


Affect is perhaps here as an invisible figuration, which doubles the literal invisibility; a convex that shows through, as though reality itself blushed imperceptibly, and some strange new optical illusion separated the trees from one another stereoscopically, allowing their three dimensions to be visible three-dimensionally. [47]

Say what? This does not (for example) follow a passage in which Zola describes trees; rather, it follows a general couple of paragraphs on how ‘the registration of affect’ begins with the second and third Rougon-Macquart novels. I suppose it falls under the rubric of dialecticism to trope Zola’s style as a vividly visual 3D cinema (a passage from La Terre captures, apparently, ‘the boustrophedon of the camera eye, giving us now the landscape, now the town’ [48]) that is simultaneously invisible, a lens that makes nature blush, a sort of trompe-l'œil that is actually imperceptible ... no. No, I don’t follow.

One thing this chapter argues is that Zola generates his ‘affect’ via what J. calls his ‘sensory onslaughts’ [65]. There are several examples given, but I’ll reproduce just one (from chapter 3 of Le Ventre de Paris) where seafood unloaded for sale at Les Halles is described in a chocka paragraph. (I’ll omit the French):


The deep-lying forests of seaweed, in which the mysterious life of the ocean slumbers, seemed at one haul of the nets to have yielded up all they contained. There were cod, keeling, whiting, flounders, plaice, dabs, and other sorts of common fish of a dingy grey with whitish splotches; there were conger-eels, huge serpent-like creatures, with small black eyes and muddy, bluish skins, so slimy that they still seemed to be gliding along, yet alive. There were broad flat skate with pale undersides edged with a soft red, and superb backs bumpy with vertebrae, and marbled down to the tautly stretched ribs of their fins with splotches of cinnabar, intersected by streaks of the tint of Florentine bronze—a dark medley of colour suggestive of the hues of a toad or some poisonous flower. Then, too, there were hideous dog-fish, with round heads, widely-gaping mouths like those of Chinese idols, and short fins like bats' wings; fit monsters to keep yelping guard over the treasures of the ocean grottoes. And next came the finer fish, displayed singly on the osier trays; salmon that gleamed like chased silver, every scale seemingly outlined by a graving-tool on a polished metal surface; mullet with larger scales and coarser markings; large turbot and huge brill with firm flesh white like curdled milk; tunny-fish, smooth and glossy, like bags of blackish leather; and rounded bass, with widely gaping mouths which a soul too large for the body seemed to have rent asunder as it forced its way out amidst the stupefaction of death. And on all sides there were sole, brown and grey, in pairs; sand-eels, slim and stiff, like shavings of pewter; herrings, slightly twisted, with bleeding gills showing on their silver-worked skins; fat dories tinged with just a suspicion of carmine; burnished mackerel with green-streaked backs, and sides gleaming with ever-changing iridescence; and rosy gurnets with white bellies, their head towards the centre of the baskets and their tails radiating all around, so that they simulated some strange florescence splotched with pearly white and brilliant vermilion. There were rock mullet, too, with delicious flesh, flushed with the pinky tinge peculiar to the Cyprinus family; boxes of whiting with opaline reflections; and baskets of smelts—neat little baskets, pretty as those used for strawberries, and exhaling a strong scent of violets. And meantime the tiny black eyes of the shrimps dotted as with beads of jet their soft-toned mass of pink and grey; and spiny crawfish and lobsters striped with black, all still alive, raised a grating sound as they tried to crawl along with their broken claws.

This, clearly, is Zolaesque; I get that. And a common textual strategy of realism, I get that too. You give the reader great scads of closely observed and specific detail about the world, and thereby trowel on a sort of thickness of verisimilitude (it’s one of the things Joyce parodies so nicely in Ulysses). Ah but the question is: is it anything more than this? Jameson wants to argue so. He sees it as a complex ‘resolution of multiplicity back into unity, of difference back into identity’ [54], a place where ‘the realm of the visual begins to separate from the verbal’ and ‘to float away in a new kind of autonomy’ [55]; his particular sense of the 'affect' he is insisting is key to Realism as a whole. It is ‘the lived experience of Bauderlairean synaesthesia, whose specificity lies in the ambiguity of separation and identification.’ It is also, he says, new, bourgeois and specifically realist: ‘the new autonomization of the sensory as it here first emerges in Zola’ [55]. Is it though? Does it really start in the 1870s? There are, after all, great spooling lists of actual things in Dickens; and in Sterne—and, for that matter, in Rabelais. How is this particular horn of plenty (think of all those Renaissance canvases groaning with painted multiplicities of luxurious foods and drink) a specifically bourgeois representation? The main character in Ventre de Paris is Florent, who returns from an eight-year prison term on Devil’s Island at the novel’s beginning (J. mentions this, but doesn’t make much of it). Couldn’t passages like the one above register his simple human astonishment at the plenitude of food in Paris compared to his previous life? 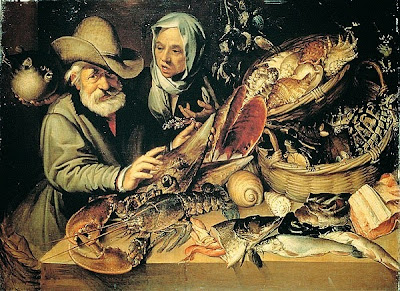 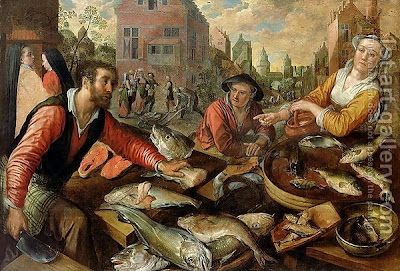 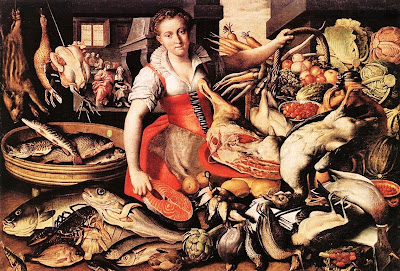 J. should be on better ground with the more specifically commodified stuff-for-sale in Au Bonheur des Dames; but here, after what amounts to a five page (count ’em!—pages 57-61) quotation from the novel, Jameson hurries through a paragraph on the ‘overwhelming juxtapositions’ the department store descriptions contain (‘here perhaps the Sartrean opposition between centrifugal and centripetal poetics has its revelance’ [61]). Subsequent argument detours via Wagner (‘the relevant example here might be … the love potion in Act 1 of Tristan, and the potion of oblivion in Götterdämmerung’ [69]) which is fine and dandy, although it rather reinforces my hunch that what Jameson is actually doing is talking about a deep-rooted Romanticism of affect. Still: onward and upward, I suppose.

[Part 3 of this readthrough is here]
Posted by Adam Roberts at 02:13