Richard Flanagan, The Narrow Road To The Deep North (2013) 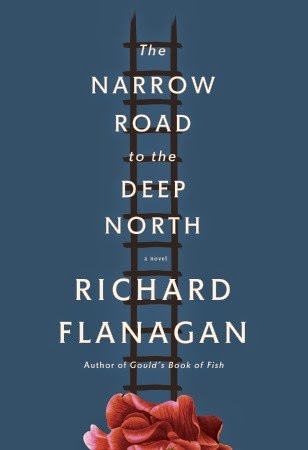 I read this in the recent Vintage paperback edition, on the verso cover of which is the following quotation from A C Grayling, Chair of the Man Booker Prize Judges 2014: 'some years very good books win the Man Booker,' he says. 'This year a masterpiece won it.' To which we're liable to return: are you high? This may be the worst novel to win the Man Booker since ... well: there are several candidates for that unsplendid title, actually, Still, this is no masterpiece. This is not a good book at all.

It's a novel that piggybacks itself on the visceral horror of Australian POWs in a WW2 Japanese work camp, straining every pip to emphasize the somatic and psychological suffering and yet leaving the reader unmoved. Its through-line is simple to the point of being simplistic: Dorrigo Evans works as a doctor on the Burma Railway trying keep men alive in an impossible situation, and remembering the affair he had with his elderly uncle's gorgeous young wife before the war. Yet though it piles on every strategy for yanking the readerly heart strings, it feels, I'm sorry to say it, phoney. One reason for that is the badness of the writing. Very much bad. Very badly written.

'I shall be a carrion monster, he whispered into the coral shell of her ear, an organ of women he found unspeakably moving in its soft, whorling vortex, and which always seemed to him to be an invitation to adventure' [20] Just terrible writing. Quite apart from anything, 'shell-like ear'? Seriously?

Which brings me to: cliché. The Japanese soldier-characters are all central casting sadists and drunkards. The female characters are from some antediluvian world of fictional representation. The prose is full of the hackneyed.  People die 'like flies' [22], are 'laid low' [181]; sleep 'like logs' [44]; 'Dorrigo's mind was awhirl' [167]; 'his whole body was aflame' [247]. A beautiful woman has 'raven hair', a 'full figure and radiant complexion' [386]. That cinematic cliché in which sex between two people is represented by waves crashing on a beach? 'Afterwards, he remembered only their bodies rising and falling with the crash of waves' [135]. Indeed, the sex-writing throughout is a mess of sub-Lawrentian overwriting: the lust he feels is 'animality ... its power and its scarcely believable ferocity ... this life force ... he surrendered himself to it. Desire now rode them relentlessly. They became reckless, taking any opportunity to make love ... the ocean rising and breaking ... their exertions slowly merging into one, bodies beading and bonding in a slither of sweat' [151]. Pages and pages of this sort of stuff.

When it's not cliché, its just baffling. 'His words ran down the empty hallway and over its threadbare coconut mat runner, searching for Amy. But she was gone from the room.' [173]  See, that's the thing about spoken words. They have lots of, er, little legs.

'On the Saturday that they were to fly to Hobart he thus took a phone call about his brother Tom's heart attack with mixed feelings' [404]. Thus?

A prisoner has eyes like 'protruding dirty golf balls' and a chin that 'looked like the snout of a wild pig' [217]. I challenge you to visualise such a face.  Or: 'the Judge's candle-wick eyes had looked down at him with flickering flames' [326]. Or Japanese officer Colonel Kota, who has a face that 'seemed to sag and fall away from either side of a shark-fin nose to ripples that trailed down his wrinkled cheeks' [111]. Or the 'Indian Captain, with silver spectacles behind which his glistening tadpole eyes swam slowly back and forth' [344]. Just dreadful writing.

There are apothegms that crumble to dust if you think about them for ten seconds ('memory is the true justice' [243]; 'the gods was just another name for time' [11]; 'the highest form of living is freedom, a man to be a man, a cloud to be a cloud' [303]). The ones that don't crumble are so self-evident as to approach fatuity. ‘Thinking: How empty is the world when you lose the one you love’ [431]. No shit.

'The happy man has no past, while an unhappy man has nothing else' [3]. Really? You're going to rip off Tolstoy's single most famous line? Well. Maybe nobody will notice.
Posted by Adam Roberts at 01:32