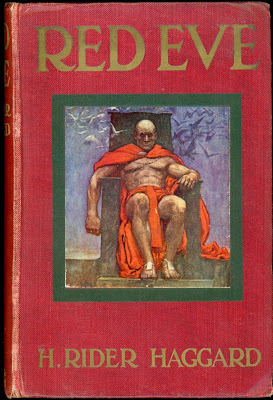 If ever I am tempted in the future to suggest that Rider Haggard 'wasn't that bad, really, as a writer', then direct my attention back to Red Eve (1911), his historical novel of plague and the Hundred Years War. Oh dear lord it's badly written. Here's the opening:

There was none to tell them of the doom that the East, whence come light and life, death and the decrees of God, had loosed upon the world. Not one in a multitude in Europe had ever even heard of those vast lands of far Cathay peopled with hundreds of millions of cold-faced yellow men, lands which had grown very old before our own familiar states and empires were carved out of mountain, of forest, and of savage-haunted plain. Yet if their eyes had been open so that they could see, well might they have trembled. King, prince, priest, merchant, captain, citizen and poor labouring hind, well might they all have trembled when the East sent forth her gifts!

Look across the world beyond that curtain of thick darkness. Behold! A vast city of fantastic houses half buried in winter snows and reddened by the lurid sunset breaking through a saw-toothed canopy of cloud.

And from later on: '"Will the French fight to-day, what think you?" asked Hugh of Grey Dick, who had just descended from an apple-tree which grew in the garden of a burnt-out cottage.'
Posted by Adam Roberts at 02:22