On Alex Boxer's excellent Idols of the Cave blog I read of this curious pamphlet: Antonio Blado’s Monstrum in Oceano (1537). Blado pretends to report the capture of an improbable looking ‘sea pig’ in the North Sea: mōnstrū marinū porco simile. 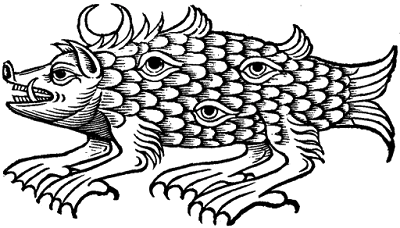 In fact, Blado’s book is expressly theological allegory, and does not present itself as a true history. After interpreting all the peculiar elements of his fantastical creature in terms of the Bible, leaning heavily on Revelation, he concludes: ‘tu ut pius es, quid omnia hæc simul iuncta portendant, pro pietate tua, ac religione interpretabere’: as you are pious, I pray you interpret according to your religious piety what all this portends.

What really interests me is that Blado’s account, and his vivid illustration of this creature, proved so popular that it reappears in other books and even in maps, re-reported without its theological gloss as an actual alien creature.

That's a detail from Olaus Magnus’ Carta Marina (‘Marine Map’, 1539). The Latin legend says: ‘this monster was observed in 1537’. To me, this speaks less to the credulity of people in the sixteenth-century and more to their appetite for the strange and the monstrous, and more specifically their preference for strange and monstrous sublimity as conceived within the logic of possibility rather than myth or ancient fable.
Posted by Adam Roberts at 10:17