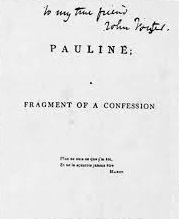 So, when I was a PhD student at the University of Cambridge many years ago (in the 1980s, no less) and working on Robert Browning, I came upon a reference in Browning's first published work, the long blank verse poem Pauline: Fragment of a Confession (1833). In the course of this work the narrator comes to a place where


nature lies all bare,
Suffering none to view her but a race
Or stinted or deformed, like the mute dwarfs
Which wait upon a naked Indian queen.

I didn't get the reference, and the footnotes didn't help me. No footnotes ever have; I don't believe any editor has explained what Browning is referring to, here. Maybe it proceeded from his fevered imagination.

Anyhow, many decades later, and pursuant to an entirely different project, I was reading Photius's Βιβλιοθήκη, which contains his capsule review (amongst many many other titles) of Ctesius's Indika, or 'History of India' (from the late 5th-century BC). Among the many marvels Ctesius records ('elephants which knock down walls, little apes with tails four cubits long, and of cocks of very large size; of the parrot about as large as a hawk, which has a human tongue and voice, and if taught Greek, speaks Greek') are pygmies:


In the middle of India there are black men, called Pygmies, who speak the same language as the other inhabitants of the country. They are very short, the tallest being only two cubits in height, most of them only one and a half. Their hair is very long, going down to the knees and even lower, and their beards are larger than those of any other men. When their beards are full grown they leave off wearing clothes and let the hair of their head fall down behind far below the knees, while their beard trails down to the feet in front. When their body is thus entirely covered with hair they fasten it round them with a girdle, so that it serves them for clothes. They are snubnosed and ugly. Their sheep are no bigger than lambs, their oxen, asses, horses, mules, and other beasts of burden about the size of rams. 3000 of them attend on the monarch of India.

Could Browning be thinking of these? Perhaps he has transferred the nakedness of the Pygmies onto the monarch. Not sure where the muteness has come from, though.

In terms of the poem, Browning is here talking about Switzerland: beautiful nature, like a naked (but why Indian?) Queen, ugly shortarsed natives (but why mute?). Or so he thought. I've always found Swiss people quite attractive, myself.
Posted by Adam Roberts at 14:20