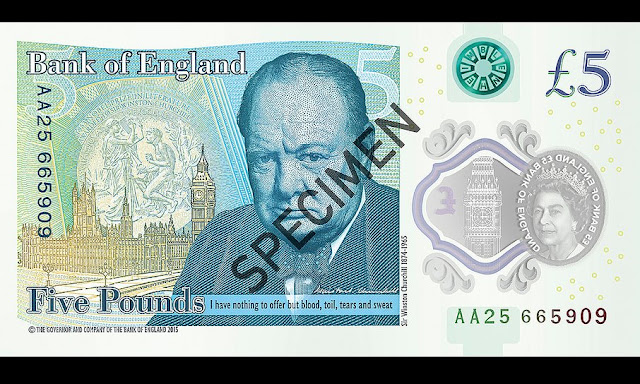 The new fiver is out soon: plastic and therefore more durable, and with Winston Churchill on the back. That quoted line, 'I have nothing to offer but blood, toil, tears and sweat' is, of course, from one of Churchill's most famous speeches, the one he delivered to the House of Commons on 13 May 1940. The speech even has its own Wikipedia page, from where we discover the lengths people have gone to in their efforts to track down sources for the phrase:


Churchill's sentence, "I have nothing to offer but blood, toil, tears, and sweat," has been called a paraphrase of one uttered on 2 July 1849 by Giuseppe Garibaldi when rallying his revolutionary forces in Rome: "I offer hunger, thirst, forced marches, battle, and death." As a young man, Churchill had considered writing a biography of Garibaldi. Theodore Roosevelt uttered a phrase similar to Churchill's in an address to the Naval War College on 2 June 1897, following his appointment as Assistant Secretary of the Navy: "Every man among us is more fit to meet the duties and responsibilities of citizenship because of the perils over which, in the past, the nation has triumphed; because of the blood and sweat and tears, the labor and the anguish, through which, in the days that have gone, our forefathers moved on to triumph." Churchill's line has been called a "direct quotation" from Roosevelt's speech.

I have a different theory. I think the speech was inspired by Mein Kampf.

I'm interested less in the specificity of the blood and sweat phrasing, and more in the rhetorical device of making a rallying-speech that concentrates only on the obstacles and laborious challenges, rather than the justice of the cause or the rapidity with which victory will be achieved: 'we have before us an ordeal of the most grievous kind. We have before us many, many long months of struggle and of suffering' and so on. Now, I'm not arguing that Churchill read Hitler's memoir (although he might have done this, since an English translation was published at the beginning of 1940). But I do think Churchill read George Orwell's review of that new Mein Kampf translation, which appeared in the New English Weekly in March 1940. 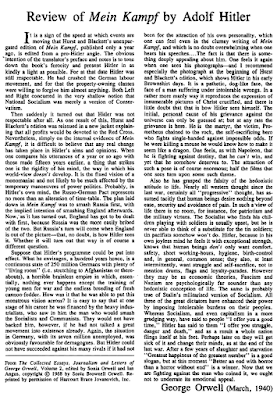 Orwell thinks the book clumsily written, and of course is profoundly opposed to what it argues; but he still thinks the 'force' of Hitler's personality shines through the writing. He's particularly interested in the 'magnetic allure' Hitler evidently possessed for many Germans. Why might this be? After all Hitler offers only visions of endless struggle and conflict in the creation of 'a horrible brainless empire' that will 'stretch to Afghanistan or thereabouts'. But, Orwell thinks, the key is precisely this repudiation of hedonism:


Whereas Socialism, and even capitalism in a more grudging way, have said to people 'I offer you a good time,' Hitler has said to them, 'I offer you struggle, danger, and death,' and as a result a whole nation flings itself at his feet.

I think Churchill was struck by that notion, reading Orwell's review in March or April, and that when he came to give his own speech in May he thought to himself: well, if it works for Adolf, mightn't it work for me?