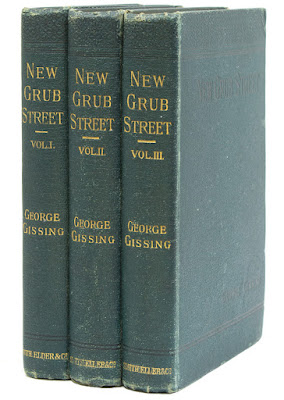 I'm ashamed to be coming so late in my life to this Victorian masterpiece: but better late than never I suppose—and I am very glad to have read it.  Gissing's triple-decker gives a compelling portrait, based closely on his own experience, of how hand-to-mouth and exhausting literary work could be in 1880s London. It works well on the level of story and character, and it works superbly as a detailed evocation of a particular social and cultural milieu. And pulling those two things off would be enough for most novels. But there was something else in this book that especially struck me, and that was a section in the book's middle where the protagonist turns into a more austere Molloy.

Let me explain what I mean.

The overall shape of the book balances the rise to social prominence and wealth of the clever but facile writer Jasper Milvain against the sinking down of the more talented but less worldly-wise Edwin Reardon. Milvain won't marry except for money, because he knows how degrading poverty can be, and one of the things the novel does is to portray him, though he is shallow and though he breaks the heart of the novel's heroine Marian Yule (she loves him: he proposes when she inherits money and then jilts her when bankruptcy nixes the inheritance) as no villain.

That's all good. But the most powerful sections in the novel, I think, are the ones where the principled-to-the-point-of-priggishness Reardon sinks into destitution. His writing income is the only means of supporting him, his beautiful wife Amy, and their young child Willie; but his novels are too refined for the popular taste and when he tries to dumb-down his art he can't even get published. When the money runs out, Reardon quarrels with Amy, who takes herself and Willie off to stay with Amy's well-off mother whilst Reardon goes to live, penuriously alone, as the clerk to a pauper hospital in the East End. Reardon's pride means that he insists on sending half his paltry wage to his wife, even though she does not need it (and indeed, writes to tell him to stop doing it). Accordingly he cannot afford to buy enough to eat, or proper clothes, or to replace his disintegrating boots. He falls in with a substratum of struggling hacks and edge-of-starvation fellows, writers unable to rise even to the medium-poverty of £100 p.a., scrabbling odd shillings together by tutoring work or begging off relatives: men like Harold Biffen, who literally lives on a slice of bread and some dripping a day as he works on his own three-volume novel (‘Mr Bailey, Grocer’), a work so dedicated to the principles of mimetic realism that nothing happens in it at all.

In these chapters New Grub Street achieves something very unusual in Victorian fiction, something distinct tonally and, as it were, existentially: a mode of apprehending a kind of absolute attenuation of lived experience. It doesn't last—I mean, the tone of this section (not the poverty: the poverty does last. Indeed, the persistence of poverty is one of Gissing's main themes as a writer). The novel shifts back to Victorian mainstream by its end. So, although there's no financial deus ex machina to rescue Reardon, the novel does recuperate him into its Victorian plot-logic by giving him a reconciliation with his wife and a deathbed scene dripping with pathos . That's all fine, and works in its context and so on. But it also marks a kind of falling away.

In the same way that a novel like Dickens's Our Mutual Friend contains all the bustle and sentiment and aesthetic affirmation of any mid-Victorian work but also contains moments of powerfully drained-away affect, quasi-surreal landscapes, or literary-experimental automata characters alongside ‘rounded’ Victorian characters—that is to say, just as Our Mutual Friend manages to be both a richly Victorian and to anticipate Modernist experimental writing—so this section of New Grub Street cathects the spirit of Samuel Beckett into a more conventionally upholstered nineteenth-century novel: briefly pitches the book somewhere between Molloy and L'Expulsé. Nestling at the heart of New Grub Street is a chunk of Beckett's aesthetic of bare-living social-existential reductio ad absurdum absurdorum, and though it lacks the echt Beckettian gallows humour it's a very potent piece of writing. Indeed, it leads me to read the novel almost entirely in the light of these chapters. Though it looks counter-intuitive to say so, I'd argue that this is the only portion of the book in which Reardon is happy. His problem is not that he doesn't fit the literary culture of his day, or that he married too early, or married the wrong woman, even though all three of those things are true. His problem is that he can only be happy in renunciation, and the more complete the renunciation the more complete his existential contentment.