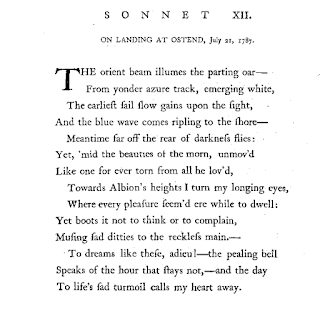 A companion piece to the previous sonnet; one day later. Here's a 1729 prospect of the port, by by G. B. Probst (after F.B. Werner):

I know that doesn't help us with Bowles's sonnet. I just like it. Maybe this early 19th-century painting ('A Windy Day Off Ostend' by Eugène Joseph Verboeckhoven) sets the scene better: 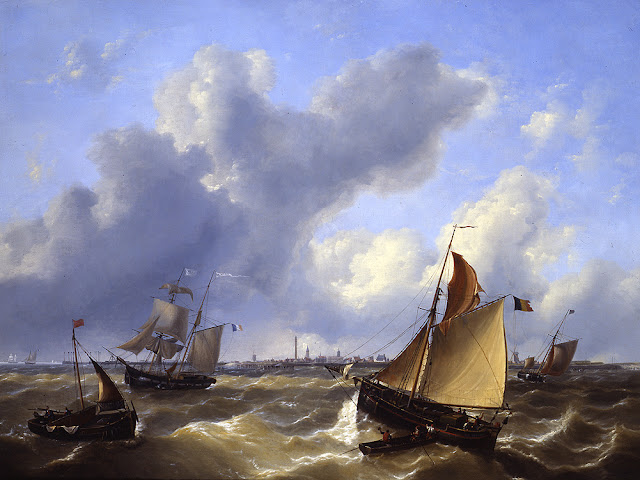 The orient beam illumes the parting oar;—
From yonder azure track, emerging white,
The earliest sail slow gains upon the sight,
And the blue wave comes rippling to the shore—
Meantime far off the rear of darkness flies:
Yet 'mid the beauties of the morn, unmov'd
Like one for ever torn from all he lov'd,
Towards Albion's heights I turn my longing eyes,
Where every pleasure seem'd ere while to dwell:
Yet boots it not to think or to complain,
Musing sad ditties to the reckless main.—
To dreams like these, adieu!—the pealing bell
Speaks of the hour that stays not—and the day
To life's sad turmoil calls my heart away.

Well, this is picturesque, I suppose; but it reads as stiff also. You don't (as reader) really believe it, I think. Why is he so sad? He hasn't been exiled. Or -- let's be specific: we could read this as an exercise in poetic fictionalisation, in which the narrator has been exiled, and looks back mournfully at the land upon which he will never set foot again. If we do so, then I suppose we'll be struck by how decorously formalised the speaker's grief is, and how inapposite is the bright, breezy, sunny weather. If we don't, though, then we're left  with the inadvertent portrait of a blinking idiot: an individual who goes willingly on holiday and then poses melodramatically at his point of arrival sighing about how sad he is.
Posted by Adam Roberts at 00:02