Bowles 9: to The River Itchin, Near Winton 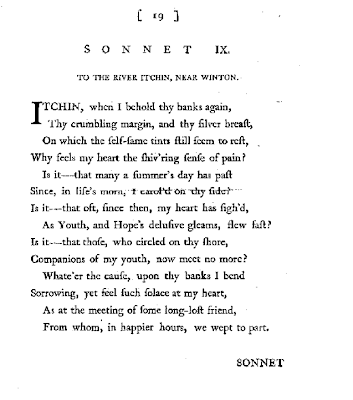 The River Itchen is a river in Hampshire, England. It flows from mid-Hampshire to join with Southampton Water below the Itchen Bridge in the city of Southampton. Here's a picture of it as it is today: 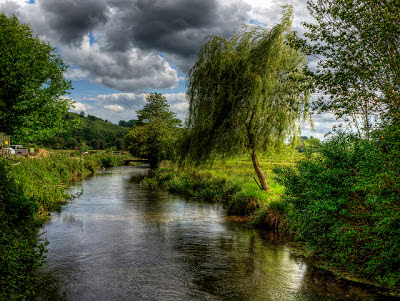 Itchin, when I behold thy banks again,
Thy crumbling margin, and thy silver breast,
On which the self-same tints still seem to rest,
Why feels my heart a shivering sense of pain?
Is it,---that many a summer's day has past
Since, in life's morn, I carol'd on thy side?
Is it,---that oft, since then, my heart has sigh'd,
As Youth, and Hope's delusive gleams, flew fast?
Is it,---that those, who circled on thy shore,
Companions of my youth, now meet no more?
Whate'er the cause, upon thy banks I bend,
Sorrowing; yet feel such solace at my heart,
As at the meeting of some long-lost friend,
From whom, in happier hours, we wept to part.

The rhetorical questions are, perhaps, a little lame; and the 'crumbling margin' strikes an odd note (wouldn't a river bank be muddy? Crumbling rather suggests dryness). But I like the way the 'shivering' of the river's surface works its way into the somatic response of the speaker; and 'circled on they shore' (the original version of the poem had the blander 'gathered') strikes a nicely ceremonial note. Are they dancing? Are they processing?

Not for the first time, reading these sonnets, I'm struck by Bowles's weird slippery, elusive emotional tone. The poem records his sadness; hope has proved itself delusive; his heart has sighed. Why. then, the rather abrupt turn in the last couplet to solace? Where is he getting that from?

On a more mundane level: I am just a little puzzled by the lines: 'thy silver breast,/On which the self-same tints still seem to rest'. Self-same? Same as what?
Posted by Adam Roberts at 02:43