What I'm going to do is read Sonnets: written chiefly on picturesque spots, during a tour (1789) by William Lisle Bowles. There are twenty-one of these, and I'll take them one at a time. Starting tomorrow with Sonnet 1. 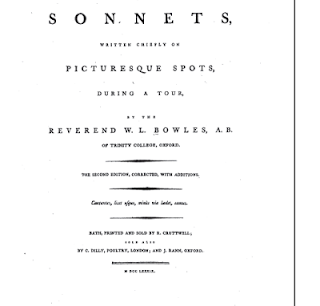 Why am I doing this? One reason: Coleridge praises these sonnets in the first chapter of the Biographia. Indeed, he does more than praise them. He allots them (alongside William Crowe's Lewesdon Hill: a Poem (1788), which I'll come to in a bit) a primary, almost a inspirational place in his own poetic education. Reading the classics of literature is good for a young poet, he says, but reading stuff by people who are still alive has a special effect. Chapter 1 of the Biographia starts with a general paragraph; then a paragraph on STC's first published collection; then three paragraphs fondly recalling a stern but effective schoolteacher who shaped and disciplined Coleridge's youthful compositional imagination. Then we get this:


From causes, which this is not the place to investigate, no models of past times, however perfect, can have the same vivid effect on the youthful mind, as the productions of contemporary genius. The Discipline, my mind had undergone, “Ne falleretur rotundo sono et versuum cursu, cincinnis et floribus; sed ut inspiceret quidnam subesset, quae, sedes, quod firmamentum, quis fundus verbis; an figures essent mera ornatura et orationis fucus; vel sanguinis e materiae ipsius corde effluentis rubor quidam nativus et incalescentia genuina;”—removed all obstacles to the appreciation of excellence in style without diminishing my delight. That I was thus prepared for the perusal of Mr. Bowles's sonnets and earlier poems, at once increased their influence, and my enthusiasm. The great works of past ages seem to a young man things of another race, in respect to which his faculties must remain passive and submiss, even as to the stars and mountains. But the writings of a contemporary, perhaps not many years older than himself, surrounded by the same circumstances, and disciplined by the same manners, possess a reality for him, and inspire an actual friendship as of a man for a man. His very admiration is the wind which fans and feeds his hope. The poems themselves assume the properties of flesh and blood. To recite, to extol, to contend for them is but the payment of a debt due to one, who exists to receive it.

The Latin is a puzzle, actually. Not in terms of what it means, which is clear enough; but in terms of where it is quoted from. It means: ‘that it was not distracted by the verse’s smooth sound and flow, nor by ornamentation, nor floweriness of expression; instead it examined the fundamentals and essences of words, to see if the figures are mere ornamentation, to check the falsity of the rhetoric; if indeed the actual meaning flows blood-red from the heart with true passion.’ Now, this passage is Coleridge’s own confection, drawing especially in its later half from medical writing: Thomas Willis’s treatise De Sanguinis Incalescentia (1672) popularised ‘incalescentia’ (it is not a word found in Classical Latin) as the standard medical term for the heat of the blood; and Johann Jakob, Bernhardin and Georg Michael Wepfer characterised a body as healthy ‘quia rubor et nativus color manet per se illaeso corde’, ‘because the redness and the native colour of the heart remains essentially unaltered [from day to day]’; [Wepfer brothers, Observationes medico-practicae, de affectibus capitis internis & externis (1727), 583]. The earlier bit of the passage appears to be STC's own.

Exactly why Coleridge's imagination should move from recollections of his school-days to a chunk of medically-inflected neo-Latin, and thence to Bowles, isn't yet clear to me. I'll think about it some more. After another paragraph, Coleridge reverts to Bowles:


I had just entered on my seventeenth year, when the sonnets of Mr. Bowles, twenty in number, and just then published in a quarto pamphlet, were first made known and presented to me, by a schoolfellow who had quitted us for the University, and who, during the whole time that he was in our first form (or in our school language a GRECIAN) had been my patron and protector. I refer to Dr. Middleton, the truly learned, and every way excellent Bishop of Calcutta ... It was a double pleasure to me, and still remains a tender recollection, that I should have received from a friend so revered the first knowledge of a poet, by whose works, year after year, I was so enthusiastically delighted and inspired. My earliest acquaintances will not have forgotten the undisciplined eagerness and impetuous zeal, with which I labored to make proselytes, not only of my companions, but of all with whom I conversed, of whatever rank, and in whatever place. As my school finances did not permit me to purchase copies, I made, within less than a year and a half, more than forty transcriptions, as the best presents I could offer to those, who had in any way won my regard. And with almost equal delight did I receive the three or four following publications of the same author.

Bowles's effect on Coleridge's development, by his own account, was salutary. In brief, Bowles saved STC from being sucked into the quicksand of Abstruse Theologico-Metaphysical Speculation.


. My obligations to Mr. Bowles were indeed important, and for radical good. At a very premature age, even before my fifteenth year, I had bewildered myself in metaphysics, and in theological controversy. Nothing else pleased me. History, and particular facts, lost all interest in my mind. Poetry (though for a school-boy of that age, I was above par in English versification, and had already produced two or three compositions which, I may venture to say, without reference to my age, were somewhat above mediocrity, and which had gained me more credit than the sound, good sense of my old master was at all pleased with) poetry itself, yea, novels and romances, became insipid to me. In my friendless wanderings on our leave-days, (for I was an orphan, and had scarcely any connections in London) highly was I delighted, if any passenger, especially if he were drest in black [he means, if he were a clergyman, and therefore versed in theology. AR], would enter into conversation with me. For I soon found the means of directing it to my favorite subjects


Of providence, fore-knowledge, will, and fate,
Fix’d fate, free will, fore-knowledge absolute,
And found no end in wandering mazes lost. [Paradise Lost, 2:559-61]

This preposterous pursuit was, beyond doubt, injurious, both to my natural powers, and to the progress of my education. It would perhaps have been destructive, had it been continued; but from this I was auspiciously withdrawn, partly indeed by an accidental introduction to an amiable family, chiefly however, by the genial influence of a style of poetry, so tender and yet so manly, so natural and real, and yet so dignified and harmonious, as the sonnets &c. of Mr. Bowles!

This, then, is what I'm going to look for, in the main, as I read Bowles's Sonnets. Their anti-metaphysical prophylactic properties.
Posted by Adam Roberts at 00:30