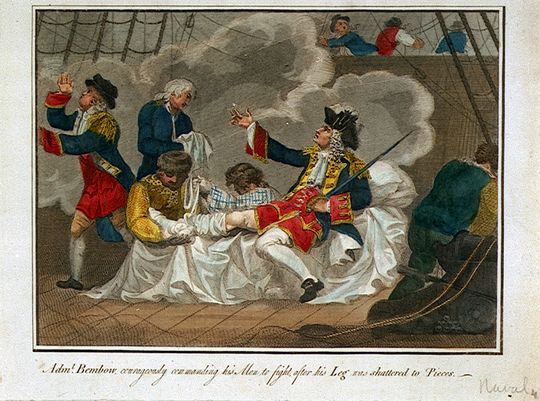 This print is called 'Admiral Bembow courageously commanding his Men to fight after his Leg was shattered to Pieces'. Benbow lost his leg in the rather utilitarian-ly titled 'Action of August 1702', which took place in August 1702. He died soon afterwards.

Now John Benbow was regarded in his time as something of a folk hero, the Nelson of his day, though he was pretty evidently rather more hotheaded and indeed piratical than Nelson ever was (item: 'It was claimed afterwards that he cut off and salted the heads of thirteen Moors who were slain aboard his ship, and then took them into Cadiz to claim a reward from the magistrates'). There were many popular songs and broadsheets singing his praises, and several pubs were named after him.

The most famous of these latter, of course, is the fictional Admiral Benbow in Stevenson's Treasure Island (1883). Not uncoincidentally, Stevenson's peerless novel contains what is surely the most famous one-legged man in all literature. I've always particularly loved this passage, Jim's speculation about Long John Silver, before he's even met him:


How that personage haunted my dreams, I need scarcely tell you. On stormy nights, when the wind shook the four corners of the house and the surf roared along the cove and up the cliffs, I would see him in a thousand forms, and with a thousand diabolical expressions. Now the leg would be cut off at the knee, now at the hip; now he was a monstrous kind of a creature who had never had but the one leg, and that in the middle of his body. To see him leap and run and pursue me over hedge and ditch was the worst of nightmares.

That last version of the one-legged man has always, perhaps incongruously for this context, put me in mind of the sorts of monster-men illustrated in Renaissance books: the kind of thing Othello boasts about having seen. This sort of thing: 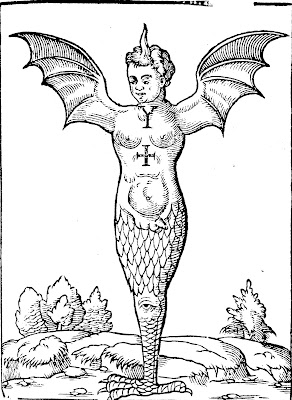 That's the Ravenna Monster from The Doome, warning all men to the Judgement (1581). Or this pleasant-looking fellow: 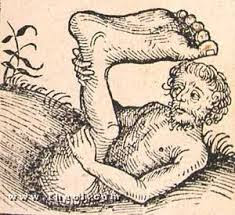 It makes me ponder what the semiology of the monocrus is, in popular culture and more broadly.

As with all the best novels, Treasure Island directs its resonance in at least two directions. On the one hand is the odour of verisimilitude. War is cruel to body-parts; but eighteenth-century sailors had a higher chance of surviving amputation (in a salty environment, wounds washed with antiseptic brine and so on) than eighteenth-century land-soldiers, a vastly higher proportion of whom died of sepsis. Therefore you'd much more likely encounter a naval amputee than a land-army one, which in turn feeds a popular perception of sailors and pirates having hooks for hands, pegs for legs and the like.

But there's another, symbolic resonance at play here, I think. One of the things Treasure Island does is work subtly against the grain. It is the disabled characters in this novel who are the most menacing, the strongest, the most dangerous: Blind Pew, Long John Silver. This is a novel that says, in effect, that possessing only one leg makes a man not less than counter-intuitively more to be feared.

I'm not immediately sure why this should be. I wonder if it has some buried psychological potency. Freud has little to say on the subject of amputation (unless we regard castration and its attendant anxiety as a form of amputation in which case he has a whole lot to say about amputation). But for any psychoanalytic theory that links subjectivity to a sense of strictly genital identity, the notion of a naturally-occurring 'one-legged human', of the kind Jim Hawkins frets about in his nightmares, is bound to be peculiarly fascinating. An amputee is a person with two legs who has had one leg removed, and whose genitals exist between the real and the phantom limb. But the Renaissance beasts above are somatically determined by their one-leggedness. This in turn leads, consciously or subconsciously, to the anxiety-productive speculation: where are their genitals? Where can they possibly be located? Our natural experience leads us to position the genitals between the legs. The question is whether this involves a tacit inversion, along the lines of when there is no 'between' there can be no genitals. Is that the type of uncanny, unnerving creature that lurks, in the symbolism of this novel, behind the one-legged man? Is that why Long John Silver is so deep-down terrifying?
Posted by Adam Roberts at 08:03