"The Tell-Tale Compression of the Pages" 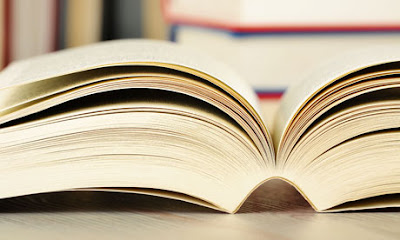 The last section of David Lodge's Changing Places (1975) takes the form of a screenplay. Philip Swallow, the British professor, and Morris Zapp, the American (which is to say: fictional-Lodge and fictional-Stanley-Fish) discuss the endings of novels. The ellipses are all in the original, incidentally.


PHILIP: You remember that passage in Northanger Abbey where Jane Austen says she's afraid that her readers will have guessed that a happy ending is coming up at any moment?

MORRIS: (nods) Quote, 'Seeing in the tell-tale compression of the pages before them that we are all hastening together to perfect felicity.' Unquote.

PHILIP: That's it. Well, that's something the novelist can't help giving away, isn't it, that his book is shortly coming to an end? It may not be a happy ending nowadays, but he can't disguise the tell-tale compression of the pages .... I mean, mentally you brace yourself for the ending of a novel. As you're reading, you're aware of the fact that there's only a page or two left in the book, and you get ready to close it. But with a film there's no way of telling ... There's no way of telling which frame is going to be the last. The film is going along, just as life goes along, people are behaving, doing things, drinking, talking, and we're watching them, and at any point the director chooses, without warning, without anything being resolved, or explained, or wound up, it can just ... end.

PHILIP shrugs. The camera stops, freezing him in mid-gesture.

Which is archly self-referential enough, I suppose. Of course, what strikes us now is that the major change in the form of the book between 1975 and 2015—from bound codex to e-book—ought to enable the author to unpick precisely this tell-tale-compression. There must be a way (there's got to be a way) to block, or better still to subvert, that little indicator at the bottom of the e-book page that gives the reader a percentage assessment of how far she had proceeded, and therefore how far she has to go. As a writer, I'd like the following hack: let the percentage counter be calibrated for 400-pages on a 250-page book, and to proceed at the former page-rate, such that the words THE END come as an actual surprise. I suppose it's the sort of trick that could only be played a few times, or perhaps even only once, before readers grew wise to it. There's also the risk that readers would be irked: 'hey! I paid for 400 pages! I've been short changed!' and so on. Worth it, though.