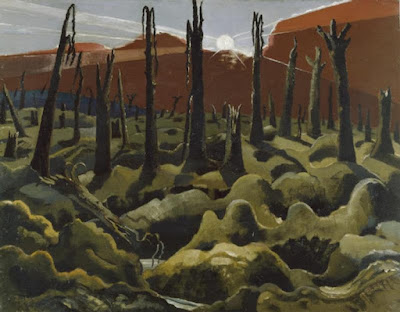 Horace's desperately famous line, 'it is a sweet and proper thing, to die for your country', is (of course) invoked here with savage irony. Harry Eyres in his Horace and Me (Bloomsbury 2013) notes that 'few poets have ever stuck the knife in deeper to a fellow poet than Wilfred Owen ... quoting Horace's unforgiveable line'. Here's the poem's final stanza.


If in some smothering dreams you too could pace
Behind the wagon that we flung him in,
And watch the white eyes writhing in his face,
His hanging face, like a devil's sick of sin;
If you could hear, at every jolt, the blood
Come gargling from the froth-corrupted lungs,
Obscene as cancer, bitter as the cud
Of vile, incurable sores on innocent tongues,–-
My friend, you would not tell with such high zest
To children ardent for some desperate glory,
The old Lie: Dulce et decorum est
Pro patria mori.

It's about the physical horrors of war, of course; but it's also about the dangerous power of poetry, or more broadly of literature and oratory. The German gas turns the lungs and mouth into horrors, but lungs and mouths, poisoned by 'froth' (Latin spuma and fervo both mean 'froth', but they also both mean 'steam', 'anger' and 'rage') and tongues twisted in vilely incurable ways, made the war happen in the first place, and persuaded young men to sign up for it.

The Latinity of the poem is certainly interesting; and rather hard to ignore, given its title and pay-off lines. Rhyming 'patria mori' with the prosodically equivalent 'desperate glory' ['— ᴗ ᴗ — ᴗ', or '— — — ᴗ', depending how we want to scan it] makes one bludgeoning ironic point. But take the phrase 'froth-corrupted lungs'. Froth is spuma, lungs are pectora. The reference here, I think, is not to Horace, but to Lucan, who includes this famous description of a dying horse in his account of ignoble Civil War:

The exhausted neck drops down, the limbs reek of sweat, the tongue protrudes and the mouth is harsh and dry, the lungs are seized by quick panting convulsions and gasping murmurs emerge from the labouring breath, the worn-out flanks—and the froth dries and sticks to the bloodstained bit. [Pharsalia, 4:754-8]

That's not irony; it's marking the ghastly connections between war then and war now. Owen plays some quite complex word-games, too. The sores on the tongue (a sore is ulcus in Latin) are vile (nequam): so the many vilenesses that have provoked this sore have made ulcus nequorum. Tempting to think that Owen was on some level thinking of the sour shadowing of dulce & decorum by ulcus & nequorum. The Latin phrase 'ulcus tangere' (it's from Terence, but was widely used) literally means to touch an ulcer, or more broadly means to 'touch a sore spot' or 'refer to a sensitive issue', which this poem is clearly, and deliberately, doing.