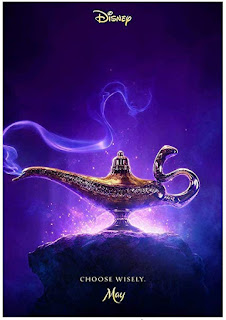 “‘Will Smith don't gotta cuss in his raps to sell records’
Well, I do, so fuck him and fuck you too”

The new Aladdin live-action is not terrible. That's as far as I'm prepared to go, value-judgement wise. It's colourful, lively, and manages to be unsaggy even if it is too long—43% longer than the original, according to Forbes. Then again, its fun is a little on the strenuous side, and Ritchie's direction, while often inventive in terms of where the camera is moving (and uninhibited about using pixilation to speed-up the dancing) isn't quite pacey enough, overall. Beats are consistently lingered-on when they should be bounced through. The mix of ‘Arabian’ cliché with Bollywood stylings and a splash of African-American wiseacre is either a cleverly inclusive move or else Orientalism 101, actually. Song-lyrics have been updated and a new song, ‘Speechless’, added. But though this is fine in itself, it's a Frozen-style belter that sorts poorly with the rest of the score, those gorgeous, light-footed, musically and lyrically witty songs ‘One Jump Ahead’, ‘Never Had a Friend Like Me’ and especially the glorious ‘Prince Ali’ (here denied its reprise).

Wisely (‘choose wisely, May’ says the film’s poster, as if addressing its message to Theresa directly)—wisely, I say, Ritche and Smith decided to avoid any kind of Robin Williams impression where the genie is concerned. And Smith's personal charm communicates itself nicely to the role, although the fizz and anarchy that defined the original's brilliance is, inevitably, lost. But there are two things about this remake that are very bad. One is Marwan Kenzari's Jafar, a performance wholly missing the high-camp melodramatic excess and splendour of Jonathan Freeman's original turn. Gurn as he might, Kanzari simply lacks menace, and without that menace the whole thing falls apart.

The other problem here is the parrot. The production team decided not to ask Gilbert Gottfried to reprise his Iago, which removes what was, in the original, one of the film's funniest characters. Instead they try to make Iago sinister. It doesn't work. During the movie's denouement Jafar, having become the world's most powerful sorceror, sends a hugely enlarged version of Iago chasing after Aladdin, as the latter flies off on his magic carpet with the lamp. It's lame. What should be an exciting chase-scene is instead, Boy Evades Big Bird. The intention, clearly, was to create a Dread Parrot, but it is not dread, it's passed over. This parrot is no more, he has ceased to be (of interest to the movie): he's a stiff, bereft of cinematic life, he's run down the multiplex curtain and joined the bleeding choir invisible. This is an SFX-Parrot. 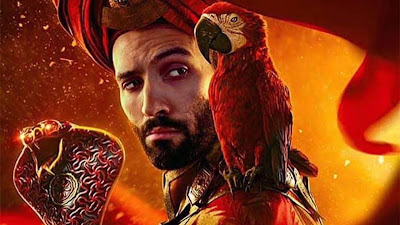