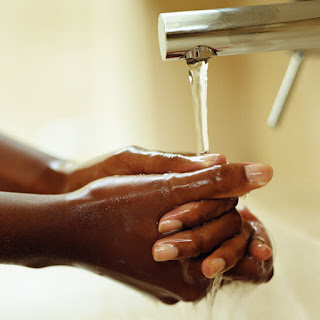 Cleanness interests me. I once wrote a literary-critical academic monograph about the subject, not something many people can, or indeed would want to, boast. Indeed, I'd say the topic tends to interest me more and more the further we retreat into retro-fascism as a species. Precisely because it's a manfest good in its simple sense—washing your hands, brushing your teeth—cleanness as a concept slides easily into some very dangerous places. Keeping your own body clean means soap and water, and is advisable; keeping your body-politic ‘clean’ means murdering many Jews, or locking up refugee children in cages, and is hideous. Think of that ghastly euphemism ‘ethnic cleansing’.

In addition to these two things, cleanness's simple somatic sense and its much more contested and perilous political sense, cleanness has a spiritual sense that interacts with the other two in complex ways. Consider Cleanness, or I should say Clannesse, the lengthy Middle English alliterative poem written at some point in the late 14th century by we-don't-know-who. It's a religious poem stressing the need for us to clean up our act if we want to get into heaven. Here's how it starts:

He who would howsoever commend Cleanness,
reckon up all the reasons that she by right asks
may he find fair forms in furthering his speech
but, in case of the contrary, huge cares and cumbrance.

‘... in case of the contrary ...’ means: if this individual were to commend the opposite thing (that is, dirtiness) then huge cares and cumbrances would be his. A few lines later:

The King that wields all power is so clean in His court,
and honest in His household, and honourably served
with his angels enveloped in all that is clean,
both within and without wearing the brightest of clothes ...

I call to mind one example among many, from Matthew's gospel,
when he describes cleanness in full clear speech:
‘Wholly fair shall he be whose heart happens to be pure,
For he shall look on our Lord with blithe cheer’;

and says besides that this sight shall never be seen
by those that have any uncleanness anywhere about them;
for He that banishes all foullness far from His heart
may not bear a body that is blemished near him.

So don't hurry to heaven in hateful rags,
nor in a peasant's hood, with hands unwashed.
for what earthly aristocrat, what holder of high honour
would like to see a lad come so lamentably attired

when he had been seated solemnly in a rich seat,
above dukes on the dias, with dainties served? [17-38]

I'm trying, though failing, to read this in the appropriately spiritual mode. It really does look like the poet is saying: ‘if you want to get to heaven, be rich’: be wealthy enough to afford the finest clothes, have time and money enough to wash and to stay clean; don't be a ‘harlat’ (‘a churl; a common man; a person, male or female, of low birth’), don't dirty yourself with manual labour. Don't hurry to heaven in hateful rags indeed. This is liable to provoke a fuck-off from most stripes of constant reader, not least because it seems directly to contradict one of the core messages of the Gospel: viz., that wealth is so far from being a guarantee of access to heaven as to be an actual impediment to it. Mark 10:25 seems unambiguous enough: ‘it is easier for a camel to go through the eye of a needle than for a rich man to enter into the kingdom of God.’

Obviously I'm missing the point. The poem is a symbolic articulation of its theme. It is not saying ‘only the rich, perfumed and well-dressed will get into heaven’, it is saying ‘these rich clothes and aristocratic manners are material representations of a non-material, spiritual truth’. We can imagine a wealthy man, outwardly well-dressed and fragrant in our world, whose soul is rag-clad and reeking; we can imagine a poor beggar, half-naked and muddy at the side of the road, whose soul shines like a babby in a Victorian advert for Pears Soap.

But, you see, here's exactly my problem. I'm not convinced people, in the main, are actually all that good at making such a distinction. I think they tend to see people-in-the-world (since in-the-world is, after all, where we all live) and to judge them on their in-the-worldness. This person is handsome, well-dressed and clean; that person is ugly, ragged and smelly. Whose is the better soul? The Cleanness poet might say ‘this individual, sitting on a fancy chair and dining with dukes isn't dining with literal lords; these are allegorical dukes and his dainty food is spiritual not bodily sustenance’. But we do not live in a world of spiritual chairs and allegorical dukes. That there is such a thing as Prosperity Theology at all surprises me, given the (it seems to me) unambiguous message of the NT regarding the disposition of loyalties where God and Mammon are concerned. But not only does such a thing exist, it dominates Christianity in America and Europe. Gain all you can, save all you can, give all you can, as Wesley famously said (Margaret Thatcher quoted this line in a notable speech). It fits well with common sense: if you're doing well in this life, it must be because God likes you. And, more perniciously, vice versa: why are you poor and suffering if you have God's favour? Stands to reason. We're in a situation where it's now much easier for a rich man to enter into the kingdom of God than for a man who smells like a camel to.

The answer, or so it seems to me, is to decouple physical and metaphorical cleanness. What societies need is not purity, but, precisely, admixture, contamination, variety, diversity. I strongly suspect that's what our spiritualism needs to: a kind of focused anti-puritanism, an openness of soul to otherness. A poem called Uncleanness.
Posted by Adam Roberts at 01:28