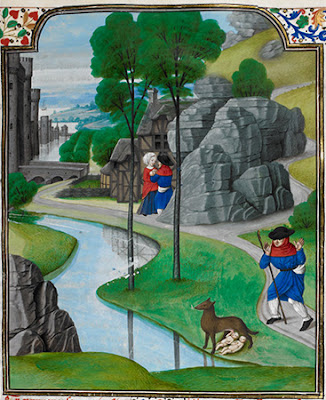 On the 13th June, the paperback of my novelisation of Anthony Burgess's The Black Prince is published; and in the run-up to that auspicious event I am going to turn this blog over to some self-promotion. At the same time, I'm trying to get my thoughts into some kind of order with respect to Fantasy as a genre—germane, that, since The Black Prince is both a (carefully researched!) historical novel and a work of Fantasy, or at any rate the closest I have come as a writer to producing such a thing. That's not so surprising, I suppose. There are many parallels, obviously, between what a writer of Fantasy does and what a historical novelist does: worldbuilding an unfamiliar environment, recreating the mindworld of characters who believe in magic, construing the-past-as-such into some kind of present-day relevancy (for what else are Tolkien, Moorcock and George R R Martin doing if not that?)

I have a day-job: Professor of Nineteenth-century Literature and Culture, which also proved relevant to my writing of this novel. You might be surprised by just how passionate the Victorians were about the medieval period. This was the century when interest in Arthurian legends revived (Tennyson’s Idylls of the King and all that), and thinkers, poets and artists from Ruskin to Swinburne and William Morris devoted most of their creative energies to the middle ages. So going medieval was, for me, something like a homecoming.

It’s making me ponder what it is about the middle ages that possess such glamour for minds like mine. After all, ‘medieval’ is sometimes used nowadays as a synonym for primitive, and life without proper dentistry, central heating or—for the vast majority of the population—any life opportunities at all beyond the local village and feudal chores is very far from an appealing prospect. Still: there’s some charisma in the period that can’t be explained simply by dewy-eyed cosplay nostalgia. How can we be nostalgic for something we’ve never experienced anyway?

One of the things that Burgess was adamant about in his Black Prince project was that he wasn’t interested in a rose-tinted soft-soap world. This was often a very violent time—by modern standards extraordinary and often casually violent—a calcified and stifling social structure, lacking many of the modern amenities that render today’s life bearable. But it’s also clear from reading his screenplay that he didn’t just think of the middle ages that way. After all, if life back then really was nothing but grime and pain, then why would we want to read about it at all?

So: in putting The Black Prince together I worked carefully to balance out Burgess’s unflinching portrayal of the darker side of Edward’s career with some feel for the allure of the historical period itself. Amongst the research I did was reading Dorothy L Sayers’s translation of The Song of Roland, first published by Penguin books in 1957—I’m ashamed to admit I’d never read it before. It’s wonderful! Though the battle it relates and celebrates took place in AD 778 the poem itself was written (by whom? we don’t know!) probably in the twelfth-century. Accordingly the whole poem is suffused with medieval attitudes and flavours. 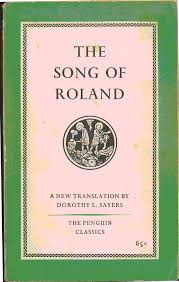 This passage in particular, from Sayers’s introduction, leapt out at me as an articulation of what is so compelling about the middle ages as such:


And so Roland rides out, into that new-washed world of clear sun and glittering colour which we call the Middle Age (as though it were middle-aged) but which has perhaps a better right than the blown summer of the Renaissance to be called the Age of Re-birth. It is also a world full of blood and grief and death and naked brutality, but also of frank emotions, innocent simplicities and abounding self-confidence—and world with which we have so utterly lost touch that we have fallen into using the words “feudal” and “medieval” as mere epithets for outer darkness. Anyone who sees gleams of brightness in that world is accused of romantic nostalgia for a Golden Age that never existed, But the figure of Roland stands there to give us the lie: he is the Young Age as that age saw itself. Compared with him, the space-adventurers and glamour-boys of our times, no less than the hardened toughs of Renaissance epic, seem to have been born middle-aged. [Dorothy L Sayers, ‘Introduction’, The Song of Roland (Penguin 1957), 17]

I think this passage struck me so forcibly because the subject of my novel, the Black Prince himself, was so extraordinarily young—his father deliberately held back and let him take charge at Crecy when he had just turned sixteen years of age, and, like a Romantic poet, he didn’t live long enough to enjoy his inheritance, or his maturity. And yet his unprecedented string of battlefield successes (and his ultimate untimely end) are the stuff not of legend, like Roland, but of history. Youth! Youth!

Take a closer look at the roundel that adorns the cover of that old penguin edition of Sayer's translation: 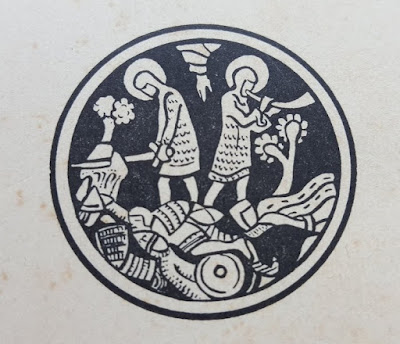 It is taken from a stained-glass window of Chartres Cathedral that is, as a whole, dedicated to telling the Legends of Charlemagne. On the right, there, you can see the mighty hero Roland himself, after his heroic but doomed defence of the pass of Roncevaux, blowing his mighty horn to summon the emperor’s army to avenge him. The figure on the left is also Roland, now dying, attempting to break his sword Durendal—‘Harder-than-hard’—on a ‘marble stone’ beneath a ‘fair tree fall’, rather than suffer it to fall into the hands of the Saracens (many of whose dead lie all around):


Count Roland smites the sardine stone amain.
The steel grides loud, but neither breaks nor bates.
Now when he sees that it will nowise break
Thus to himself he maketh his complaint:
“Ah Durendal! So brave, so bright, so gay!
How does thou glitter and shine in the sun’s rays! …
Now am I grieved and troubled for my blade;
Should Paynims get it, ‘twere worse than all death’s pains
Dear God forbid it should put France to shame!” [2312-37]

He dies before he can dispose of his sword, and the poem is neither evasive nor sentimental on death, on the savagery and hideousness of the battlefield and the waste of war. But it is a poem that captures the gleam of something finer too, and I hope that my novel, in its different way, manages to do so too. 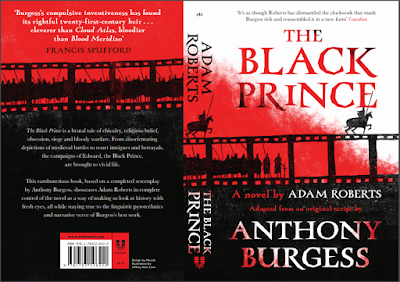