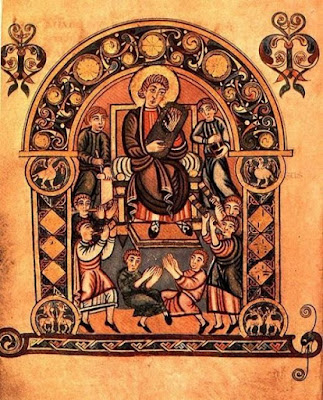 There's no shortage of translations of this, English's oldest surviving poem, of course. Why attempt another? Well, looking at the poem again I was struck, as I hadn't been before, that one way of reading it is as an expression of the many different ways in which we might name God (Lord, Almighty, Maker, and so on). So I had a go, picking out with capitals the way Cædmon rings those changes, whilst keeping as much of the alliteration and the original sound-patterns as I could.


Now should we hymn again       heavenrealm's Warden,
the Measurer's might       and his mind's thought,
work of the Wielder-father       from his first wonders,
see this Sovereign,       what he established.
He earliest shaped       for earth's offspring
a heavenroof on high,       that holy Shaper;
middle-earth was made       by mankind's Guardian,
and that Emperor       afterwards adorned
our folk's fine fold,       almighty Führer.

This works, if it does, by a process of accumulation that pays off (if it does) on the last word—which I insist is not only justified by the alliteration and the etymology of it (and of the original frea; they both come from the same root, which means to lead forward) but also in terms of the increasingy oppressive hectoring of the piece itself, short though it is. It reminds me a little of Michael Palin's vicar, from Meaning of Life: ‘O Lord, ooh you are so big’ and so on. Cædmon? C'mon, man!
Posted by Adam Roberts at 00:16