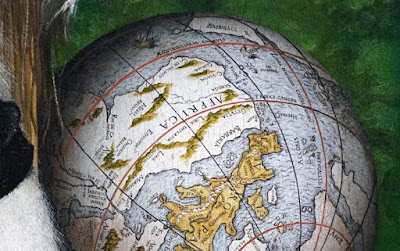 That, of course, is the globe from Holbein's The Ambassadors (1533). It's based, it seems, on an actual globe:


Holbein copied a globe from 1526. The original was a printed globe, made possible by the revolution in print technology that had transformed Europe since the middle of the 15th century. The globe was likely printed in Nuremberg, and was popular in the 1520s and 30s.


Several red lines also run through parts of the globe in Holbein’s portrait. One, which runs through Brazil and divides the Atlantic, was the line agreed to with the Treaty of Tordesillas in 1494. This treaty resulted in much of the Americas being granted to Spain, while Brazil was granted to the Portuguese. Another line, one that resulted from the Treaty of Saragossa in 1529 (once again between Spain and Portugal), divided the map in the other direction, giving the Portuguese the Moluccas, or Spice Islands. The inclusion of these lines reveals the importance of the competition between colonial powers for land, resources, and people, and the far-reaching implications that European maritime voyages and colonial expeditions would have across the globe.

Politics, politics. But I'm interested for the moment in what this globe says, specifically, about Africa.

Click to embiggen. ‘Ethiopia’, for much of European history, was a general term more or less interchangeable with ‘Africa’ as such (it's from Homer), and sometimes used to distinguish Black Africa from Arab or Berber Africa. You can see that the map identifies both Ethiopa and, further east, a sub-Egyptian Ethiopia. Algeria is ‘Barbaria’, the land of the Berbers, but otherwise this is mostly recognisable: there's Senegal, ‘Melli Regnu[m]’ means ‘the kingdom of Mali’, ‘Nubii Regnu[m]’ is Nubia, and so on. Comparison between Holbien's version and a contemporary (1550) printed-book map brings out the two biggest differences between this notional Africa and actual Africa: the lack of any Saharan desert wastes, and the extreme north-south foreshortening of the whole continent. 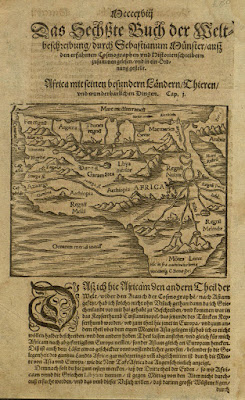 Isn't the representation of the Nile interesting, though? Centuries before the source of that river was actually explored by Europeans, here it is shown as deriving from a network of large rivers all rising in the far south, and converging on a huge inland island. You can just about make out this isle in Holbein's painting. It's clearer in the woodcut: 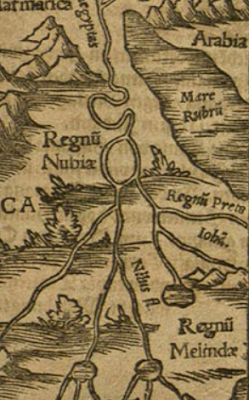 Since this geographical feature is purely speculative, and has no basis either in travellers' tales or in reality, its inclusion must serve some other purpose. I can't find out what, though. Was this where Prester John was supposed to reign, perhaps? Some Utopian topography? We should probably ask the skull. 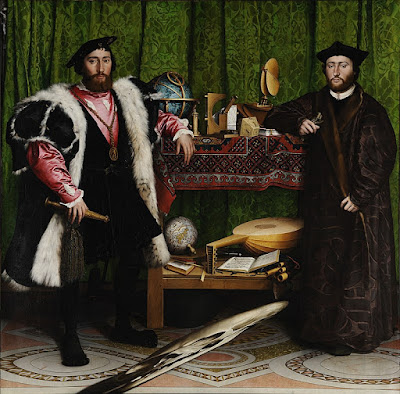