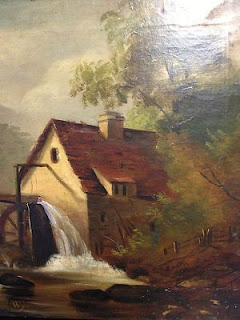 One of the things I did last year was to re-read Middlemarch, adding my thoughts to those by other readers on Gail Marhsall's excellent Middlemarch month-by-month blog. 200 years since her birth, you see. Here, for instance, is my final blogpost, on Eliot, Pascal and infinities. Now: one of the things taking part in that process encouraged me to do was reconsider provincialism in art as such. One of the other contributors to Gail's collective blog, Ruth Livesey (a colleague of mine, actually) is presently an AHRC Leadership Fellow 2019-20 looking into questions of ‘Provincialism: Literature & Cultural Politics’, by way of ‘exploring how Eliot was shaped by the education and experience she received while living in the Midlands, and how she believed “art had a responsibility to show a provincial life could be just as full of insight and moral courage as one on the great world stage.”’ It's a very interesting question. Eliot is certainly both a great artist and an intensely local, midlands one. One might say the same about Tolkien.

It's thrown me back on some earlier thoughts. There always has been localist literature; plenty of topographic specificity in 18th-century poetry, but where this is sometimes styled as (and sometimes self-presents as) a withdrawal from politics, that very act of withdrawal strikes me as political, or ideological-aesthetic. A good deal of 18th-century localism actually embodied a Cincinnatus-style withdrawal from the national stage to the local focus of one's provincial life. Cincinnatus was a much more important figure to the neoclassical world than is something realised, I think; and one of the aspects of that is the sense that national, or global, politics are inevitably corrupt and corrupting, such that a principled retreat from the larger stage to the local one is seen as a cleansing action. In the nineteenth-century too, the mainstream of Byronic international cosmopolitanism, or Tennysonian civic performance, existed alongside a more modest strand of provincial poetry, a la Clare or Barnes. But the question that really interests me is whether the 19th-century as a whole sees a shift away from a mode characteristed by large-scale social engagement towards a Cincinnatian withdrawal; from an attempt to make art systematic and global to a valorisation of the local in art.

The question is whether this correlates to a kind of abdication of the larger social project to understand the world—to, indeed, change it. In Dickens we see various textual strategies that are designed to use the metropolis as a way of apprehending and comprehending the whole world: all of society, men and women, young and old. Something is amiss, the world is not as it could be, and Dickens wants to understand what, and to see what can be done about it. London, according to this reading, is the urbs mundi; the whole of the world—the English countryside, America (in Chuzzlewit), France (in Bleak House and Dorrit) are all positioned in terms of London, as not-London from whence the story must inevitably return to London. London, in other words, is Dickens’s modular way of engaging with the largest questions. Compare this with Hardy, from the century’s end. Hardy’s Wessex is not a microcosm of the whole world; it is, quite specifically, Wessex. That's very much its point. The stories Hardy tells are human stories, and like all human stories they scale more generally as commentaries upon human experience; but they are local stories. The extent that Hardy’s writing represents a withdrawal from the ambition of a write like Dickens—the ambition to find a way of apprehending the whole, of writing systemically about the system—is precisely the extent to which Hardy’s writing is elegiac in tone, tragic in mode, a literature of enclosure rather than disclosure.

A parallel case (it is, perhaps, not the parallel that would spring readily to most people’s minds) is the career of Alan Moore. By which I mean: is there a similar withdrawal in his body of work? -- from the larger, politically engaged narratives of texts such as V for Vendetta and Watchmen—works that use the melodrama of the graphic novel mode to interrogate questions of the largest social and political relevance—into the private realms of pornographic sexual fantasy (Lost Girls) and localism—Moore has increasingly committed himself artistically to his native Northampton. The question, then, is: how fair would it be to describe this as a retreat from the very idea of the ability of writers to alter the larger political debate? In the case of Moore, his 1980s anti-Thatcher work was the product of a time (which I remember personally) when the left had a recognisable enemy, and was, broadly, fired-up and ready for the fight. Speaking (again) broadly, much of this energy was dissipated through the 90s and into the noughties, when the UK Labour Party was in power and instituting its nominally socialist, practically Thatcherite programme. Some of the harder left did rail against this, of course (the most effective rallying call was the Gulf War). Some were converted to New Labour; but many simply retreated from national political engagement altogther, to, as it were, plant cabbages in their back garden or become involved in local history. Or, for all I know, pursue elaborate pornographic fantasies or write mournful lyric poetry about dying.

Does something like this account for the drift towards localism in the later nineteenth-century? The struggle seems to avail naught, so the fighter withdraws as gracefully as possible from the national ring, and focusses instead upon private pleasures (Lost Girls) or local history, topography and life (in, say, Northampton).

Actually, now I'm starting to wonder if we might read Edwin Drood as about this: the (good) Cincinnatian remove to the countryside of Dickens's childhood and country residence, set against the (bad) abdication of social responsibility in favour of individual sensual pleasure represented by opium.

Thoughts provoked, or re-provoked, by the recent election result, staring down the barrel of five years of Johnsonianism and Brexit, five more years (likely enough) of Trump and the integral intensity and hostility of what passes, under the regime of social media, for non-local public discursive spaces. Sigh.
Posted by Adam Roberts at 01:57