How Many Did Justinian Kill? 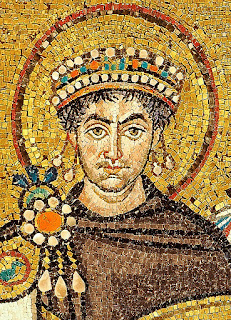 A trillion. You read that right.

Hard to keep your hands clean when running a large empire over many decades, of course. But did Justinian the Great, Byzantine emperor, really kill so many? Here's the relevant bit from chapter 18 of the Anekdota, or ‘Secret History’, of Procopius:


And that he was no human being, but, as has been suggested, some manner of demon in human form, one might infer by making an estimate of the magnitude of the ills which he inflicted upon mankind. For it is in the degree by which a man's deeds are surpassingly great that the power of the doer becomes evident. Now to state exactly the number of those who were destroyed by him would never be possible, I think, for anyone soever, or for God. For one might more quickly, I think, count all grains of sand than the vast number whom this Emperor destroyed. But making an approximate estimate of the extent of territory which has become to be destitute of inhabitants, I should say that a trillion people perished.

That's the 1935 Loeb translation. The translator/editor, H. B. Dewing, notes that the Greek translated as a trillion is literally ‘a myriad myriad of myriads’, adding ‘the “cube of ten thousand” is not the language of exact computation, and Procopius is trying to make out a strong case against Justinian.’ No shit. A trillion is the number a kid reaches for when he wants to emphasise the magnitude of a given thing.

But let's imagine it was true. How might we frame it, as history or (better) as fiction? A planet vastly more populous than it is, even in the overcrowded twenty-first century; a world in which humans live cheek by jowl, perhaps because, as with the Biblical patriarchs, people live hideously elongated lives. And here comes Justinian, to cull the overcrowding, to reduce human lifespans to their present levels and sweep away billions upon billions into the afterlife. No wonder the Eastern Orthodox Church made him a saint.
Posted by Adam Roberts at 09:44