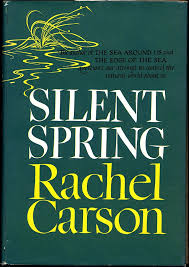 Carson's titular silence is that of the birds, of course, their song stifled by pesticides: either they have been killed directly by the poisons we are pumping into the environment, or they have been starved by the fact that our poisons have killed off all the insects, their food, indiscriminately. Carson's 1962 book, very influential on subsequent culture and society, remains a powerful read today. It didn't create ‘eco-criticism’ or ‘Environmentalism’ from whole cloth, but its enormous success certainly added momentum to what, in the 60s, they called ‘ecology’. Carson's skill as a writer leavens what might, in other hands, have been a merely drily factual, or (worse) a hectoring or preachy, work; to read Silent Spring is potently to feel how polluting industrial pesticides can be. Nor do I wish to position myself as someone, as it might be, in opposition to environmentalism. That is, honestly, the last place I wish to go, down amongst the scums and bums of climate-change denial and anti-environmentalism. DDT was backed by wads of big-business money, no question; and its indiscriminate use had, as Carson demonstrates, a range of deleterious consequences. Her work was one factor that led to the creation of the American EPA, and the worldwide banning of DDT. Carson argues for alternate modes of pest control in our farming, and talks about the possibilities of biological controls, but actually what has happened is that other pesticides have been developed. Most farmers use them unless they are producing that luxury good, ‘organic food’, for which some affluent consumers are prepared to pay a premium. Not everyone sees the banning of DDT as an unallowed good, mind: 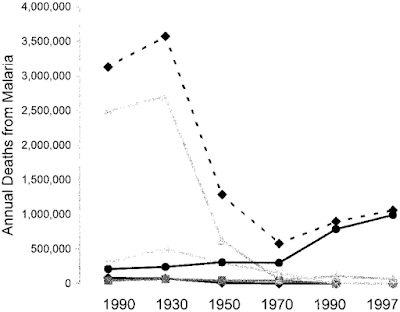 That uptick, on the right side of that graph? That's mosquitos bouncing back, after many years of being rather well controlled by DDT. Nowadays 300 million people get malaria annually and about a million die, the vast majority of these (80% and up) being children under the age of 5. Their voices, we might say, are doubly silenced, by being the children of the globally poorest, and by being dead. Eight hundred thousand dead children. It's the sort of statistic that numbs the brain. It shouldn't though; it ought to set the brain on fire. [Update: Peter Erwin, in the comments below, challenges this point and provides evidence for a different take.]


1. A Fable for Tomorrow

THERE WAS ONCE a town in the heart of America where all life seemed to live in harmony with its surroundings. The town lay in the midst of a checkerboard of prosperous farms, with fields of grain and hillsides of orchards where, in spring, white clouds of bloom drifted above the green fields. In autumn, oak and maple and birch set up a blaze of color that flamed and flickered across a backdrop of pines. Then foxes barked in the hills and deer silently crossed the fields, half hidden in the mists of the fall mornings.

Along the roads, laurel, viburnum and alder, great ferns and wildflowers delighted the traveler's eye through much of the year. Even in winter the roadsides were places of beauty, where countless birds came to feed on the berries and on the seed heads of the dried weeds rising above the snow. The countryside was, in fact, famous for the abundance and variety of its bird life, and when the flood of migrants was pouring through in spring and fall people traveled from great distances to observe them. Others came to fish the streams, which flowed clear and cold out of the hills and contained shady pools where trout lay. So it had been from the days many years ago when the first settlers raised their houses, sank their wells, and built their barns. Then a strange blight crept over the area and everything began to change. Some evil spell had settled on the community: mysterious maladies swept the flocks of chickens; the cattle and sheep sickened and died. Everywhere was a shadow of death. The farmers spoke of much illness among their families. In the town the doctors had become more and more puzzled by new kinds of sickness appearing among their patients. There had been several sudden and unexplained deaths, not only among adults but even among children, who would be stricken suddenly while at play and die within a few hours.

There was a strange stillness. The birds, for example— where had they gone? Many people spoke of them, puzzled and disturbed. The feeding stations in the backyards were deserted. The few birds seen anywhere were moribund; they trembled violently and could not fly. It was a spring without voices. On the mornings that had once throbbed with the dawn chorus of robins, catbirds, doves, jays, wrens, and scores of other bird voices there was now no sound; only silence lay over the fields and woods and marsh.

On the farms the hens brooded, but no chicks hatched. The farmers complained that they were unable to raise any pigs— the litters were small and the young survived only a few days. The apple trees were coming into bloom but no bees droned among the blossoms, so there was no pollination and there would be no fruit. The roadsides, once so attractive, were now lined with browned and withered vegetation as though swept by fire. These, too, were silent, deserted by all living things. Even the streams were now lifeless. Anglers no longer visited them, for all the fish had died.

In the gutters under the eaves and between the shingles of the roofs, a white granular powder still showed a few patches; some weeks before it had fallen like snow upon the roofs and the lawns, the fields and streams. No witchcraft, no enemy action had silenced the rebirth of new life in this stricken world. The people had done it themselves.

. . . This town does not actually exist, but it might easily have a thousand counterparts in America or elsewhere in the world. I know of no community that has experienced all the misfortunes I describe. Yet everyone of these disasters has actually happened somewhere, and many real communities have already suffered a substantial number of them. A grim specter has crept upon us almost unnoticed, and this imagined tragedy may easily become a stark reality we all shall know. What has already silenced the voices of spring in countless towns in America? This book is an attempt to explain.

What this is, as a piece of prose, and in a word, is: pastoral. It takes its place in the long traditional of framing the countryside as an idealised, small-scale, inviting (‘a checkerboard of fields’; white clouds like ‘bloom’ in the blue sky; ‘shady pools where trout lay’) and above all authentic location. It was in the 1950s-60s that the global population shifted from more people living in ‘the countryside’ than in cities to the other way about, but you wouldn't get any sense of that from Carson. We get no sense that foxes are predominantly suburban animals nowadays, or that nature flourishes in metropolises in a thousand ways. I suppose it's that the city is not clean, in the sense that Carson values cleanness. I mean, urban living is clean, according to some important salients of that complicated term (it's a much more efficient mode of human habitus, for instance) but it's not uncluttered, spacious, unhurried, untechnological. It's not, in Carson's tacit reckoning, aboriginal: ‘so it had been from the days many years ago when the first settlers raised their houses, sank their wells, and built their barns.’ Ah, the autochthonic farmers of America! It's not as if there were any other folk living in this spotless land before these settler housebuilders and barn-raisers arrived, after all. It's not as though a whole congeries of people, living not according to pastoral-agrarian but rather hunter-gatherer logics, were almost entirely obliterated by the gun and the smallpox germ: a deeply unclean business, here wholly occluded. So we might say: one of the silences in Silent Spring is the voice of the Native American, a figure nowhere mentioned in the volume.

Pastoral, as a mode, has a long a complicated history, from the more stylised and conventional idylls of classical antiquity, and their Renaissance and 18th-century imitation in poetry and painting (and, in the case of potemkin villages or Marie-Antoinette-esque cosplay, in real-life), through the reappraisal of pastoral as a more strenuous but spiritually beautiful mode of life in Wordsworth and his 19th-century imitators. By the 1960s countercultural ideas and hippy naturalism intertwined with art, both pop and narrative, that celebrated a small-scale agrarian life in specific opposition to the horrors of the machine and technology. Tolkien's Lord of the Rings (published earlier, but a book that broke through into the mainstream in the 1960s with cheap paperback publication), pastoral in the same anti-machine, small-c-conservative manner, is similarly a hymn to spacious rural environments uncontaminated by, well, by inhabitants. Think how low-density the populations of Middle Earth are! Much quieter than the real world. There is a clamour in reality, but it is at least a human clamour; the noise of traffic is humans getting about, the city din is people being people, and although none of that has any place in Carson's vision of a deer silently padding across a mist-wreathed field, it seems to me a marvellous thing in its own right. I suppose I'm suggesting that Carson's silence possesses a complex valence, a thing to be deplored where the birds are concerned but, dialectally, celebrated on a human scale. I suppose I'm suggesting I don't agree.

Another anti-machine writer who saw a second-wind, a new vogue, in the 1960s and 1970s was D H Lawrence, and he too fundamentally disliked the mess that he took people to be. He liked individuals; he just disliked people in the mass, and his environmentalist vision was even more Year Zero than Carson's: “Don't you find it a beautiful clean thought, a world empty of people, just uninterrupted grass, and a hare sitting up?” Me? No. As it happens, no I don't: I find it a totalitarian and indeed sociopathic thought. But perhaps that is just me.