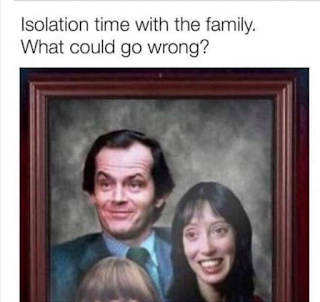 There's a lot of vagueness about the Virus, of course, and a great deal we don't know. My university closed its doors to face-to-face teaching halfway through the 17th March. I was in work that day: gave an hour-long 10-o'clock lecture to a room containing about a third of its usual audience and then scurried back to run an office hour. I received the official shut-down email before my 12 noon seminar (I went down to let the students know, but only one solitary individual had actually turned up; the rest had received the same email as me and wisely absented themselves). The thing is, assuming Coronavirus arrived in the UK mid-Jan, which I understand is the most likely date, and factoring-in that my university has a large cohort of international students, it is as close to certain as makes no odds that I have been exposed to Covid-19. Of course I don't physically touch my students (yeah yeah, laugh it up fuzzball), but I do touch many doorhandles and other surfaces they have touched, and I only started obsessively washing my hands, and taking the necessary pains to keep my wandering fingers from exploring my face, at some point in March. So long story short: yikes.

I worry in the ways that we all worry, but with the added considerations that I'm a fiftysomething geezer in poor respiratory health (I don't smoke, but I've had lifelong and occasionally acute asthma), so it seems to me I really don't want to be getting this bug. I mean, obviously I don't want anyone in my family getting this bug, but my wife is a fair bit younger and in much better health than I am, and our kids are, well, kids and it seems they are less at risk for that reason. My asthma is pretty well controlled by modern drugs, but my lungs are not strong. So far, and touch wood, I don't seem to have picked it up. This coming Tuesday will be 14 days since my last trip into work, and whilst that's not an absolute cut-off (14 days incubation is, so far as I can see, a guess by the medical authorities, although an informed and conservative one; plus, in the last week and a half I have been out twice for groceries) I'll start to breath a little easier [hah!] if we reach that deadline without me succumbing.

But wait: what if I've had the virus already and happened to be one of the nonsymptomatic ones? Or what if the virus is waiting, like a sniper, until the lockdown eases and then it bags me? Impossible to know, either way of course. That's part of the insidiousness of pandemics: the way their reality trades in probabilities, not certainties, and for whatever evolutionary or other reason, we are not well fitted-up to calculate and process a world of probabilities. We prefer the lineaments of a world where striking this white billiard ball to hit that red billiard ball will cause that red billiard ball to shoot off in that direction. This isn't how viruses present, phenomenologically.

Still, roll-on Tuesday. I don't mean to sound like I'm bragging, but the home lockdown doesn't bother me. Or hasn't yet. It's early days I know, and saying so is probably a hostage to fortune, but: relieved from the obligation to go out, staying inside a house in which there are tens of thousands of books to read ... this is very far from being Alcatraz, for me. It's going harder on my more extravert and gregarious wife, who I fear is starting to feel the walls closing in, somewhat. And our two kids (one eighteen, the other twelve) are bouncing around more than a little. What can I say? We have their best interests at heart. In the words of Fauxlip Larkin:


They lock you down, your mum and dad.
They really mean to, and they do.
They stop you seeing all your mates
And stop those mates from seeing you.

But they are locked down in their turn
By governmental dictats from
A P.M. with a soppy gurn
And experts looking dour and glum.

We're in this for the long haul, guys,
All isolating, each to each.
Stay inside, healthy, cool and wise,
And don’t go popping down the beach.

I'm well aware we're better off than many. We're in a house and the house has a garden; I'm still on salary; there are, as I say, tens of thousands of books here. We're all in the same boat, nationally (globally, indeed) and there's nothing special about me. Unless I get the bug and it kills me, in which case I will have the unappealing distinction that our collective mortality shines, darkly and always individually, upon us all sooner or later. But here's hoping: the second one.
Posted by Adam Roberts at 12:47