I'm working through the whole of H G Wells's oeuvre and blogging about it (in Another Place) as I go. And now I'm into his 1914-1918 writing, which I'm supplementing with a little, rather desultory if I'm honest, for-context reading about the First World War. In the course of which I chanced upon this Canadian victory poster. I love the aesthetic mash-up of medievalised and modern styles in its main image, but the panel of text at the bottom is pretty wonderful too. 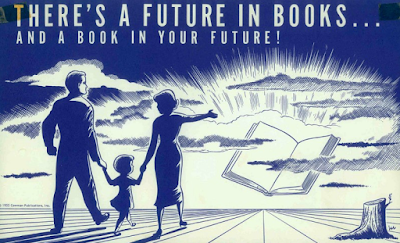 Posted by Adam Roberts at 06:37 No comments:

Lad and the Devil 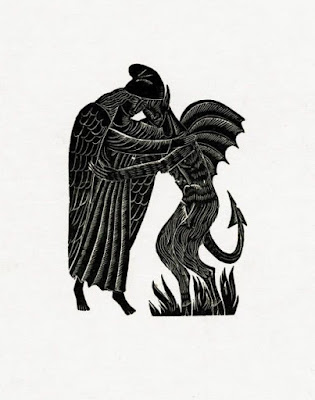 Lad and the Devil agreed to build a bridge together. The bridge was to link the east bank of the Kentish Stour and the western bank of the Welsh Wye; and Lad needed it to visit his wife, who otherwise would be weeks of walking away. Now, the bridge must be built all in one night, for if it is unfinished in daylight it will fall into the waters as nothing but a heap of stones. ‘I'll help you, Lad, and we'll agree to labour together at the task,’ said the Devil; ‘but the first soul to cross it shall be mine; such is my bargain.’ ‘Very well,’ said Lad; and Lad knew that the Devil believed the first soul across would be Lad's wife—or, perhaps, Lad himself—and that either would gratify him. So they two came at sunset, and the Devil carried a great brass hammer, and Lad carried only an old bone. ‘You'll neither drive piles nor split rock with that,’ said the Devil. And Lad replied: ‘but I shall make the effort, and it was my labour, not my success, you bargained for.’ So the Devil had no choice but to do all the hard work himself, setting the piles and laying the heavy stones and hauling the beams; whilst all Lad had to do was to set the slate to cope the parapet, and he did so by thwacking it into place with his bone. And before dawn the bridge was finished, and the sky began to blush on the east, though it was yet still night. And the Devil put out from his throat Lad's own voice, as the Devil can do, and called Lad's wife to come try the new bridge and visit her husband. And Lad's wife appeared, on the far side. But Lad was quicker, and with all his strength he hurled his bone over the bridge. His dog, Siôn Cent, ran after the bone and over the bridge, and laughingly Lad said: ‘our deal is done, for there's your soul.’ But the Devil shook his head, full of terrible solemnity, and said ‘there's no soul in a dog, my Lad. The bargain is unfulfilled.’ And Lad began to tremble with fear.

Just then, as the dawn swelled over the horizon, Lad saw his wife start upon the Wye-side of the bridge and come towards him. All his lightness of spirit left him then, and he felt a terror and dread; for he loved his wife and could not abide the thought that she would become the Devil's. So he ran himself onto the bridge, and met his wife halfway. ‘If you cross the Devil will take you,’ he said. ‘And if I cross, the Devil will take me!’ ‘What then?’ replied his wife, ‘must we abide on the middle of this bridge forever?’ ‘Return you to the far side, and I shall take myself back to the near, and though we do not see one other again for many years, we shall at least escape the Devil's clutches.’ ‘Very well,’ cried his wife, ‘Though I'll have of you one last embrace, for the love I hold for you, and the love you hold for me.’ And so they embraced one another. But the sun came up, and a piece of slate that Lad had laid carelessly fell away as the couple lent against it, and fell into the river: for an old bone does not settle a coping slate as well as a coping hammer. So the bridge was incomplete by daybreak, and all tumbled to loose blocks in the daylight. Lad and his wife, clasping close together, fell into the river—whether the Wye or the Stour none can say, for they stood exactly in the midst of both yet wholly in the realm of neither. Certain it is that they were never seen again in Wales or England, and there are some who say it must be they fell into the waters and were drowned and so went to hell. But others say they dropped into some new land of brightness and sweet skies, and began a new life, and the Devil was thwarted. As to which of these two is the true ending of the tale: that is something you must decide for yourself.
Posted by Adam Roberts at 10:41 No comments: