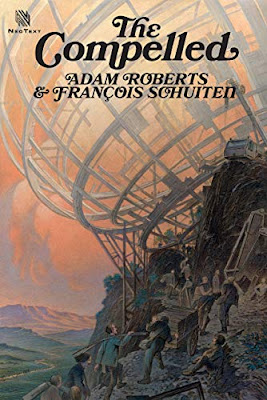 Out today (available as e-text only, Amazon US, Amazon UK). The story's not bad but François's illustrations are something else again. 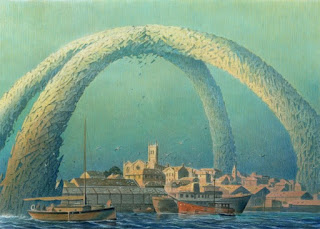 If I Were Called In To Construct


If I were called in to construct a religion
I would start with opposition.
Pick an established faith, like Larkin's Water,
and attack it as insufficiently aquatic.

I would bewail the drowned
and blame Larkin;
and gather an army and make war
upon the Larkinians,
kill them, seize their Larkwives
and their Larkine.

I would establish the Holy Romarine Empire,
crown my good with brotherhood
from land to shingly land.
Scorch my enemies and parch my friends.
After that comes expansion, missionaries,
elaborate ritual, green-and-purple robes,
High Holy Days to mark the fullest tides.

Then a long period of decline
as theologians bicker over
increasingly crumbling minutiae
and ordinary people live by
a calcified version of the once flowing spirit
(stalactites, coral, ice)

when I will walk the beach, with all the stiffness of age—
as the breakers come and keep coming
bowing before the land like heretics—
and contemplate Mystery, salt and unsustaining.
Posted by Adam Roberts at 23:54 No comments: