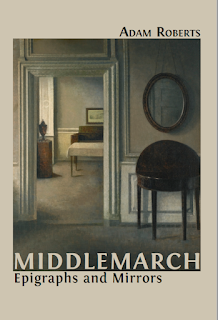 Today my short monograph Middlemarch: Epigraphs and Mirrors is published by @OpenBookPublish. It is, as its title suggests, a reading of Eliot's marvellous novel via the text's many epigraphs and embedded quotations, some of which I track-down and identify for the first time. That sounds dry I know, but I hope I make something a little more illuminating and engaged out of these readings, to do with Eliot's distinctive and powerful modes of realism, reading the mirror-like and lens-like effects of Eliot's complex allusiveness in terms of her mimesis. There are chapters on the novel's intertextualities via George Sand and Pascal, Sappho, 19th-century Science, Tolstoy and Zola, Rousseau, Homer and Sophocles, Goethe and Guizot, bits and bobs on paintings and music and bells, Brownian motion and Herodotus. I am Professor of Nineteenth-century Literature and Culture after all.
The book is free to download, and reasonably-priced if you want a hard-copy.
Posted by Adam Roberts at 07:17 No comments:

It’s the End of the World: But What Are We Really Afraid Of? 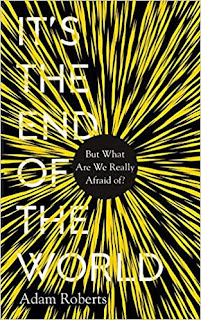 Delighted and, I'm not going to lie, a little surprised to hear that my It’s the End of the World: But What Are We Really Afraid Of? (Elliot and Thompson 2020) has won the non-fiction BSFA Award. It really is an extraordinary and unexpected honour, particularly considering the strength of the shortlist. It was a strange business, writing a book about the end of the world whose publication coincides with a global pandemic and lockdown. next time I'm going to write a book about world justice, communism, happiness and utopia and see what happens.